We examine a handsome Chinese-made valve mic with retro style to spare. But how does it sound?

The Sontronics Omega is a relatively straightforward cardioid-pattern capacitor microphone with a tube preamp, built around a centre-terminated one-inch capsule. Cosmetically, the microphone looks a little unusual, with its elongated body and disk-shaped grille, and unlike the majority of Chinese-built mics, you can't get access to the body simply by unscrewing the end cap — you have to remove several small cross-head screws first. 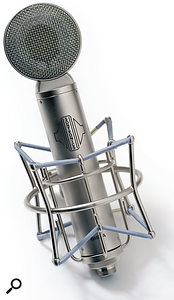 Like the Sontronics Helios valve mic we reviewed in SOS September 2005, the Omega comes with a chunky power supply that looks a bit like a giant DI box. There are small toggle switches on the PSU for bringing in a 10dB pad and a low cut filter, and as with the other Sontronics tube mics, the mains voltage can be switched between 115 Volts and 230 Volts. An eight-pin locking XLR cable joins the mic to the PSU and a blue 'Tube Ready' LED comes on when the system has warmed up. Power comes in via an IEC connector and there's an illuminated power switch.

Supplied in an aluminium camera case, the mic is packaged in a further wooden box and there's also a shockmount included with the system. The latter is fairly conventional, though I did find that the elastic belts came unhooked rather too easily when removing the shockmount from the mic stand.

Another thing the Omega has in common with the other Sontronics mics I've looked at is a paucity of detailed technical information. The 20Hz to 20kHz frequency spec tells you little enough about what the frequency range really is at the crucial -3dB points and nothing whatsoever about the location and extent of any presence peak. However, we are told that the EIN (Equivalent Input Noise) is 18dB and the sensitivity is 25mV/Pa, both fairly typical figures for this type of microphone. The noise spec is unexceptional but should be no problem in typical close-miking applications. The maximum SPL figure is 125dB, which is a little on the low side, but, again, not really a problem unless you're close-miking very loud instruments.

The tube used in the preamp circuit is a standard ECC83 (also known as a 12AX7) and the output is via a balancing transformer. Engineering-wise, the metalwork is solid, adequately well finished and plated with a satin silver finish. There's a bit of ringing in the metalwork if you tap the mic, though, which more careful design would have eliminated. The mic is also actually quite weighty, but providing you tighten the shockmount swivel properly, it shouldn't droop. 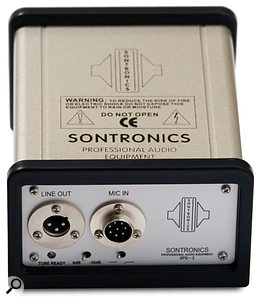 I used this mic to record a pair of particularly good vocalists, one male and one female, who were working on a soundtrack for a musical. This mic suited the male vocals extremely well, giving a sweet, well-rounded sound but still with plenty of detail. Tonally, I preferred it to the Helios and Orpheus models, largely because it didn't seem to exaggerate the upper mid-range as much. I felt it had the right balance of presence and warmth for male vocals. It also worked pretty well on the female vocal, though it didn't sound quite as smooth as it did on the male vocal — it introduced just a hint of harshness into the sound and also felt less supportive at the low end. Nevertheless, with careful positioning, I was still able to get a very usable sound with little or no EQ. The Omega also gave decent results with acoustic guitar, though to be fair there are very few capacitor mics that don't, as long as you are careful about where you position them.

As with so many mic tests, this one confirms that it's not just the mic that's important but also picking the right mic for the singer in question. We're always getting letters and emails asking us to cut to the chase and just say which mic is 'the best' within any given price range, but we really can't. We can point to which have the best specs and which have the best build quality, but that doesn't mean much if the sound doesn't work for your voice. In fact, of all the studio mics I've ever reviewed, I could count on the fingers of one hand those models that couldn't produce great results when used properly, even those right at the bottom end of the market. Of course, with a tube mic like this one that's priced a little higher, there's a lot of competition, not least from companies like Rode, whose K2 tube mic is technically more advanced (both mechanically and in terms of its noise spec) and also sounds very sweet. But again, though they can both sound great, they also sound different, so what sounds better in my tests may not sound better on your voice.

Having said all that, I felt immediately comfortable with the Omega, and its response is not so coloured that it becomes inflexible in different roles. It gave me a first-class male vocal sound with no effort at all and a very acceptable female vocal sound with just a little care. Given the subjective quality of performance, and accepting that tube mics will always cost significantly more than solid-state models, the Omega seems very fairly priced. If you get a chance to try one, I recommend you do.

The Omega is a great-sounding mic in most vocal applications, but check it suits your voice as all mic/singer combinations are different. On the whole, the mic represents good value for money and looks different enough to be eye-catching.