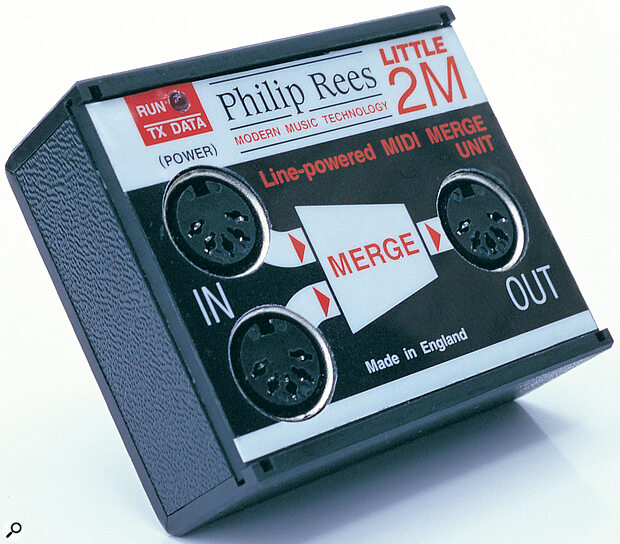 Paul White plugs and plays with the latest products from MIDI widgeteers Philip Rees, a range of non‑nonsense MIDI mergers.

After what seems like a long time with no new products, Philip Rees Music Tech have launched a whole new range of problem‑solving boxes including a set of three MIDI merge units. Joining the existing 2M and 3M mergers in the line‑up, the new Little 2M, 5M and 9M are capable of combining anything from two to nine MIDI data streams.

Presented in the familiar Philip Rees livery of black, white and red , the Little 2M is a two‑into‑one merge unit little bigger than a matchbox which, like Anatek's Pocket units, draws its power from whichever of the connected MIDI devices is plugged into the upper input. Such units are prone to problems because they only work when the MIDI output circuitry of the powering device conforms precisely to the MIDI specification. Philip Rees has developed special circuitry to reduce incompatibility problems to a minimum, but the manual warns that there may still be some equipment out there that won't drive it. In any case you get two shots at making the unit work, because if the device plugged into the upper socket isn't compatible you can simply swap the inputs over and take the power from the other source. (Note, however, that only the upper input accepts MTC.)

The Little 2M is designed to pass SysEx messages of any length — though, again, the manual warns that trying to pass heavy SysEx traffic at the same time as another signal may affect the timing of that other signal. Given that large SysEx dumps tend to be performed on their own, and not at the same time as you transmit timing‑critical musical data, that shouldn't be a problem.

MTC messages are accepted only via the upper input, and an intelligent piece of software looks after the re‑transmission of MIDI Clock data so that the most recently started clock is used as the source. Song Position Pointers are passed through with the correct timing. A red LED shows that the unit is powered; to save power, this blinks out as data is passed.

Both the larger merge units are powered by mains adapters. Next up from the Little 2M is the 5M, which simply merges five inputs to produce one output — though a certain amount of intelligence is built in to avoid data conflicts or data bottlenecks. As with the 2M, the 5M will only re‑transmit MTC received via the uppermost socket, though MIDI Clock data can, as before, be accepted via any input.

The 9M again handles SysEx data streams of any length, though trying to merge several busy SysEx streams will probably lead to trouble. The manual, quite fairly, points out that as SysEx is such a complex protocol, there may be some combination of circumstances that will cause problems. On the other hand I've used the predecessor to this unit on many occasions, and found it to be very reliable for SysEx transmission — and I experienced no problems of this kind with any of the models during the review.

Because merging nine data streams is asking a lot of any device, the 9M incorporates additional data‑thinning algorithms that prioritise time‑sensitive data when the traffic gets too heavy to handle. If pitch‑bend data comes from two different sources on the same MIDI channel, an 'interlock' system determines which one of them should be in control — the streams are not merged as this generally leads to a meaningless pitch‑bend performance. Instead, the source that last passed through zero takes priority. For all other controllers, it's up to the user to ensure that merging them makes sense.

I actually managed to confound the line‑powered Little 2M while trying to merge the output from my MOTU MIDI interface with the PhatBoy GM/GS hardware controller — the arrangement almost worked, but some MIDI notes went missing. However, swapping around the two inputs cured the problem, leading me to conclude that one of the sources did not conform exactly to the MIDI spec. Of course, this doesn't matter with the powered units, as they don't rely on the incoming MIDI signal to supply their operating power.

The manuals supplied with the units are full of helpful advice on using merge boxes without getting into trouble, and the information on MIDI Clock handling is particularly useful. SysEx dumps are transmitted without fuss, though it makes sense to moderate or suspend other MIDI traffic while you're doing them, as even an intelligent merge box doesn't keep you completely safe from the possibility of MIDI data jams. On the whole, though, these little merge units are about as foolproof as you can reasonably expect them to be. They're also very cost effective.

Once again, Philip Rees have come up with a useful and sensibly priced range of MIDI merge units designed to work in real‑world conditions.