128 MIDI channels would have seemed like complete overkill ten years ago, but today's multitimbral voice modules can use them up at an alarming rate. Martin Russ checks out an eight‑port patchbay/interface from Opcode.

Opcode's Studio 128X is the "twice‑as‑big" (but in the same size box) elder sibling of the Studio 64X MIDI Patchbay and Interface that I looked at in the May 1997 issue of SOS, and has eight MIDI ports instead of the 64X's four. Having an extra four MIDI ports may not seem all that significant, but it says a lot about the user's studio: four ports might be described as 'compact', but eight ports is definitely 'serious'. Welcome to the big league.

Each port on a multi‑port MIDI interface/patchbay can cope with 16 separate MIDI channels. An eight‑port version, therefore, can cope with 128 individual MIDI channels or multitimbral parts — which explains the Studio 128X's name. Whereas 128 channels would have seemed like complete overkill ten years ago, today's multitimbral expanders can take up alarming numbers of MIDI channels. Using an eight‑port interface and patchbay like the 128X, however, should give you access to more than enough sonic armoury to cope with all but the most demanding of applications.

What a patchbay does is let you hook all of that sound‑producing power together in various combinations, whilst the MIDI interface lets you drive it all from a computer sequencer. You also get straightforward sync'ing to timecode on tape. (For more sophisticated synchronisation, the four‑port Studio 64XTC provides a much wider range of additional sync features like ADAT and other digital audio compatibility. Mike Collins reviewed the 64XTC in the April 1998 issue of SOS. Will we see a similar 128XTC version in the future for anyone who needs these extra sync functions?) 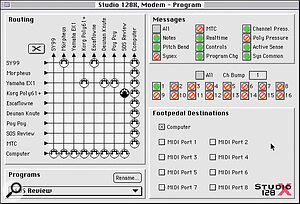 The routing program is shown as a cross‑point matrix in the control window.

The Studio 128X allows you to route any MIDI input port to any MIDI output port, with channel‑changing and filtering applied along the way. It's possible to merge two or more inputs together, or alternatively to drive several outputs from one input. You can store eight of your own routing programs inside, and three utility programs are permanently stored inside, along with five SMPTE striping programs. Editing of the user programs can only be done with a Windows or MacOS computer, but they can be used from the 128X alone once they have been stored in it.

When used with a sequencer, the Studio 128X becomes a Computer‑to‑MIDI Interface. Cables for serial data connection from the computer to the Studio 128X are included, and there's a 'thru' connection so that you can still use the serial port (to send to a printer, for instance) when you're not playing with MIDI. On the PC, the 128X is bound by Windows 95's device limitation of 11 MIDI ports, which can sometimes be exceeded by the combination of a sound card and a multi‑port interface (the 128X actually uses nine MIDI ports, including the control port, when connected to a computer). MacOS users do not have the port limitation and can, if they so desire, use two Studio 128Xs to give a full 256 (16 ports‑worth) MIDI channels.

OMS‑based routing processing on a MacOS computer. The blue area shows a basic routing, while the 'Virtual Controller' window shows how a master keyboard can be filtered and given a 'generic' name. The 'Big Stack' is merely a short‑cut for a big stack of instruments.

MacOS users also get the advantages of OMS‑based MIDI processing. In addition to the Routing, Footswitch (program advance and MIDI message send) and SMPTE windows, and the graphical representation of the studio in the Studio Setup window, the Studio Patches application allows you to use the Mac to process the MIDI information in ways that can make those eight ports much easier to live with, especially if you want to make the most of the opportunities offered by MIDI. You can define a processed version of a master keyboard with MIDI Clock filtered out, and a modified velocity curve, and then connect this 'virtual' Controller to 'virtual' instruments made up out of stacked, layered, transposed and split assemblies of expander modules, samplers, and the like. Once you've produced your own customised MIDI equipment, then hooking it together is much easier, and you have simple but detailed control over exactly what is going on — and it is all shown graphically!

The two main tests of how good patchbays and interfaces are concern the time delay through a MIDI patchbay, especially with heavy processing, and the response to merging overload. The Studio 128X MIDI In to Out delay was about 500 microseconds, which went up to about two milliseconds for Mac‑based processing — more or less the same as that of the 64X. Merge loading worked okay for a typical 'real world' test in which two sets of Notes and Pitch Bends were merged. When I tried one of the more extreme System Exclusive tests (two sets of Notes, Pitch Bend, MIDI Clock and SysEx all merged) the target expander module did exhibit some of the classic 'MIDI bandwidth exceeded/buffer overflow' by‑products like notes not being turned off. However, this sort of thing is less a real‑world test than a test to destruction!

I could complain a little. I want to gripe about the plug‑top power supply's flawed power connector, which is located so close to the SMPTE jack sockets that it makes simultaneous sync, rack‑mounting and power tricky to achieve for complex topological reasons which are obvious when you see them, but impossible to describe in words. Opcode haven't fixed the lack of a front‑panel program display, nor the MIDI/Thru switches' annoying lack of any sort of easily visible indication — and these were both mentioned in my review of the 64X! But I won't press charges because...

The Studio 128X gets everything else just about perfect. It looks cool, it has flashing LEDs for each In and Out port, and the front panel operation is wonderfully simple. The eight ports will suffice for all but the biggest rigs, and the routing and filtering capabilities will cover just about any eventuality — and even if they don't, the Mac‑based OMS processing will! Physically it is small and neat, and the cost fits the same descriptions. For anyone who wants to hook together more than three bits of MIDI gear, the 128X is well worth a very close examination.

Well suited to the larger home studio or project studio. A worthy successor to the Studio 64.