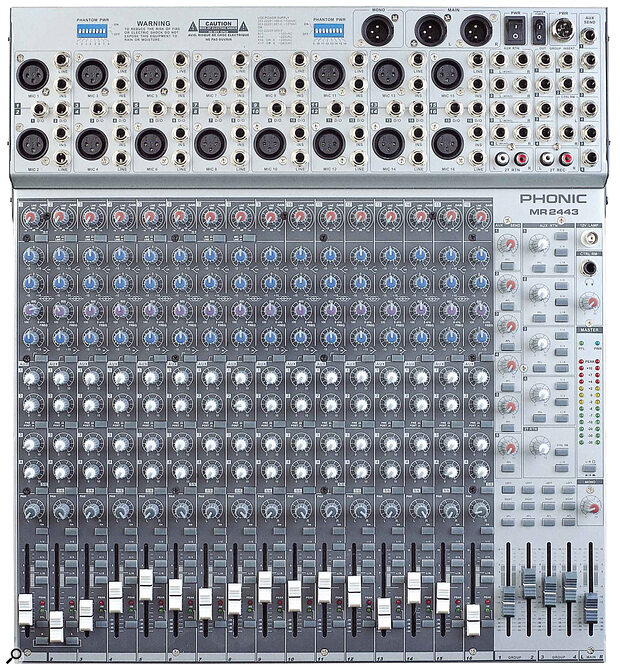 We test a versatile four-bus mixer which provides mic amps and direct outputs for all of its 16 input channels, as well as offering built-in facilities for M&S recording.

The Phonic MR2443 is a compact yet flexible mixer designed to suit a wide range of applications, from general live sound to small studio use. It is small enough to be rackmounted, or it can be used on a desktop. Its 16 mono input channels feature direct outputs, making it suitable for both studio‑based and location multitrack recording. A rackmounting kit is included, and the patchbay section can be swivelled so that it faces the rear when in the rack. Power comes from an external PSU module that plugs into the mixer via a locking three‑pin connector. All 16 channels have both mic and line inputs, one unusual feature on a mixer of this price being that the phantom powering can be individually switched for each channel using miniature DIP switches. A three‑band EQ with sweep mid‑band is fitted to each channel, and the master section includes four aux returns plus a stereo tape return.

The channels each have four Aux controls (which access six aux send buses), an On button, a signal present LED, and routing to four groups as well as to the main stereo output. One feature I haven't seen in this type of mixer before is the pair of switches which configure the first two input channels to work with sum and difference signals, as would be required when working with M&S recordings. M&S (or Middle and Side) recordings are made with a centre omni or cardioid mic plus a figure‑of‑eight mic pointing across the soundstage. By taking the sum and difference of the two mic output signals, a true stereo image can be derived, and by varying the mix of the mic signals, the stereo width can be adjusted, from mono all the way to extra wide, after recording. On the MR2443, channel one handles the centre signal and channel two the sides signal. Both channel pan pots are overridden in this mode.

Phonic have designed an input stage that they claim is capable of an EIN (Equivalent Input Noise) figure of 130dB, which compares well with the usual 127 to 128dB figure quoted by many other manufacturers. The mixer also has a frequency response extending beyond 60kHz, which is in line with the current thinking on high‑quality analogue equipment. The line input is on a balanced TRS jack, while the mic is a regular XLR. A Mic/Line switch is fitted to the first eight channels, which means both inputs can be left permanently connected if necessary. The remaining eight channels have no selector switch and are designed so that the line input overrides the mic input. In all other respects, the channel features are identical, with the exception of the M&S switching, which only applies to channels 1 and 2.

Each channel has an insert point, but the low‑cut filter switches are in the EQ section rather than the input section. The channel direct outs are impedance balanced, and are fed post‑fader via a buffer circuit. The insert is pre‑EQ, unbalanced on a tip‑send, ring‑return TRS jack. 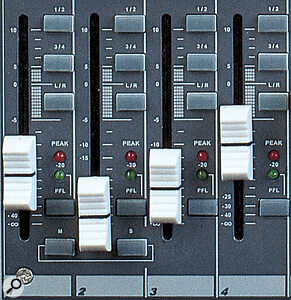 Channels 1 and 2 can be switched to decode a stereo signal from a pair of microphones in M&S configuration.The channel mic/line gain is adjusted via a single control with a maximum gain of 60dB (mic), after which the signal passes through a three‑band equaliser with a sweep mid‑section. The high and low sections are shelving equalisers working at 12kHz and 80Hz respectively while the mid‑band can be swept from 100Hz to 8kHz, providing plenty of scope for tackling lower mid‑frequency resonances that some sweep EQs can't reach. All three EQ sections have a ±15dB range and an additional 18dB/octave low‑cut filter operating at 75Hz can be switched in, though there's no EQ bypass.

Finally comes a very conventional pan and routing section with routing buttons for L/R, 1/2 and 3/4 as well as On, PFL and the buttons to switch the pair of channels into M&S mode. The fader is a 60mm type with 10dB of gain above unity. A status LED is fitted to show signal peaks, with a second LED shared between PFL and signal present (where a level of ‑20dB indicates signal present). When PFL is active, the LED stays on, and it flashes to indicate signal present.

Frankly, some mixers are confusing, but here the designers have tried hard to make the master section as logical as possible. For example, all the aux send and return masters are grouped together, each send having level control and an AFL button, while the four stereo returns have gain control, a PFL button and three routing buttons for L/R, 1/2 and 3/4. The two‑track tape return is also in this section, with a level control and routing to either the L/R mix or the Control Room feed. Headphone monitoring and control‑room monitoring share a level control, with the phones socket directly above. For live use, there's a 12V BNC connector for connecting a gooseneck lamp. A 13‑stage LED meter monitors the main stereo output level or the M&S level (when M&S mode is being used) and two LEDs show the master PFL and power status — the blue power LED is almost bright enough to read by!

Each of the four groups and the main stereo mix are controlled by separate faders, rather than ganged stereo faders, and the groups may be individually routed to the Left and/or Right mix buses. Each of the four groups has its own AFL button. A separate mono level control provides an independent mono summed output mix, which in live situations might be used for feeding a centre speaker cluster, though there's no facility to mono the main (normally stereo) outs.

Unusually for a mixer of this price, the Phonic MR2443 has individual phantom power selection for each channel (albeit using miniature DIP switches), as well as a global phantom power switch.The attention to clarity of layout has also been extended to the socketry, where the input sections are arranged in two rows, odd numbers on top and even numbers below. The mono and main outs are on balanced XLRs and right next to them is the main power switch and a global phantom power switch that feeds the individual channel DIP switches. All other line connections, including individual group outputs, are on quarter‑inch jacks, with the exception of the two‑track ins and outs, which are on RCA phono connectors.

In most respects, the MR2443 behaves quite conventionally, though there's something a little odd about the gain structure. Normally, if you PFL a signal and then compare its level with the normal mixer output, with both channel and output faders set to unit gain, the level will be the same. Here though, the mixer output seems to be 10dB below the expected PFL level, which means you need to use some of the available gain on the faders to restore the level. This may be just a bus headroom issue, but it's something you need to be aware of.

Tests with good‑quality capacitor mics showed the mic preamps to be extremely quite and generally neutral‑sounding. Bringing in some EQ demonstrated at once that the EQ is quite assertive, but used sensibly it's actually very musical, with the high EQ being particularly good for adding an expensive sheen to tracks. Used in the boost half of its range, the mid‑band can sound quite honky, which is not unusual for band‑pass equalisers, but when used for cut, it's actually extremely effective in scooping out those trouble spots that invariably crop up in the lower mid‑range. Not having bypass buttons is a bit of a disappointment, but at least the cut/boost controls are centre detented.

Apart from buttons that look almost identical in both the up and down positions, the mixer was a joy to use, as everything is so obviously positioned. Having single group faders and routing buttons rather than stereo group faders also adds to the routing flexibility of the mixer, as do the fully routable aux returns.

Aside from the inclusion of the M&S facilities on channels one and two, the MR2443 is a very straightforward mixer capable of producing good results. It is clearly set out, it has all the essential features (other than EQ bypass) and it has the benefit of channel direct outputs, which really opens up the multitrack recording possibilities. Of course, there's no dedicated monitoring section on a mixer of this type, but it is possible to record and mix up to eight tracks at a time by using the first eight tracks for recording via the direct and bus outs, and the remaining eight tracks for monitoring the recorder outputs via the stereo mix output. There's nothing much to complain about, though I always prefer an internal power supply to an external unit for a small mixer, and the slightly odd gain structure can be disconcerting. On the whole though, this is a nice‑sounding, flexible mixer at a sensible UK price.

The MR2443 is a very practical, general‑purpose mixer that's quite flexible enough for serious recording tasks as well as live sound.