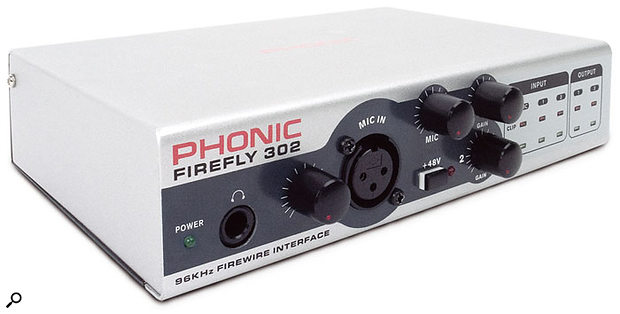 Phonic's diminutive Firewire audio interface is extremely affordable and it can record at 24-bit/96kHz. Is it too good to be true?

The latest Firewire product from Phonic is a compact desktop audio and MIDI interface aimed at those musicians who do not need to record huge ensembles, but still want the chance to use high bit and sample rates. The Firefly's bit rate is actually fixed at 24, but sampling can be switched from 44.1kHz to 48, 88.2 and 96kHz. Although it only outputs two channels at a time, the 302 can simultaneously record up to five channels when its three analogue inputs are used alongside the stereo S/PDIF input.

The Firefly 302 has been priced so that even with VAT added its RRP comes in at just under the magic £100 mark. So, what do you get for your £99?

Measuring less than 200mm across, the Firefly is smaller than the advertised half-rack size, and is designed to sit unobtrusively on a desk beside a laptop or monitor. Situated on the front of the device are all the adjustment controls required for normal operation, plus a couple of sockets catering for the items Phonic expect to be most regularly connected.

The first of these is a headphone output, accompanied by its own level-control knob. The second is an XLR input for use with microphones, flanked by its own signal-input adjuster. Also on the front is a button for applying the 48 volts of phantom power required by a typical condenser microphone, together with a red status LED. The only other front-panel controls adjust the level for the analogue inputs found on the rear. To the right of these controls is the two-stage metering display, which simply lights green when a signal is present and then red when it begins to clip.

At the back there are inputs and outputs for S/PDIF digital interfacing, MIDI, and analogue signals. The analogue I/O is provided in both quarter-inch jack and RCA phono format, but these alternatives share the same channel routing and are not meant to be used simultaneously. The manual posts two warnings about trying to use both together, one stating that the results of mixing will "sount terrible" (sic), the other that will cause "irreversible damage." Nevertheless, it is possible to combine both formats by mixing either Jack 1 with RCA 2, or RCA 1 with Jack 2!

The Firefly can operate using either the six-pin or four-pin Firewire cable formats — having both connectors on the rear — although only a six-pin cable was included with the review unit. For those who need to use the four-pin type, which does not carry power, Phonic provide a 12V mains adaptor as part of the package, and there is a rear-panel switch to select whether this or the six-pin Firewire bus is used to power the unit.

The Firefly package includes two CD-ROMs carrying essential setup tools for both Mac and PC, not least of which are the drivers and Phonic's Control Panel software. Installation is merely a matter of running the driver disk and following the screen prompts, although there is one crucial step that requires the user to turn the Firefly's power off and on before continuing, so that the program can recognise the connection. At first this wouldn't work for me, and the problem turned out to be a hardware one. After communications with UK distributors, Shure, I was told that there were issues with the six-pin cable mode in early models — like the one sent for review! Apparently it worked OK with Macs and certain laptops but the output of desktop PCs was not agreeable to the Phonic. Bearing this in mind, I bought a four-pin cable, used it together with the supplied 12V power adaptor and was able to complete the installation process. Some weeks later Shure provided a revised model which worked happily with a six-pin cable. Result!

The Firefly's rear panel: the analogue ins and outs can be accessed via the quarter-inch jack sockets, the RCA phono connections, or a combination of the two.Anyway, after the setup procedure installs the relevant ASIO drivers, the Firefly should happily communicate with the computer's recording software. The manual refers exclusively to Steinberg Cubase LE, which is bundled free on the second disk, but the hardware can, of course, be used with other DAW software. In Cubase it is necessary to select the Firefly 302 ASIO driver in the VST Multitrack page (found within the Device Setup menu), and, just below this option, there is a handy button that opens up the Phonic Control Panel software. This can also be accessed via the menu bar at the foot of the main Windows screen. In the software, a Settings page provides a group of sliders for adjusting audio buffer depths, so that issues of latency can be addressed, and another page, called Synchronisation, is where the sampling rate is set and the Firefly's slave/master status can be changed — as is necessary when using the S/PDIF I/O.

Operating the Firefly hardware should seem fairly straightforward even to the novice, as there is very little to worry about other than setting the levels so that they don't clip. Recording via the analogue and S/PDIF inputs produces pretty satisfying results, which can't really be faulted at this price. The mic preamp is adequate for most jobs, if a little flat sounding, but for really critical vocal performances it would be worth seeking out a dedicated preamp.

Inevitably Phonic have had to make some design compromises, and one of the most annoying problems I encountered was a whiney headphone amplifier on the review model, which consistently output a level-dependent, high-pitched digital drone. Tests showed that the noise was not an audio issue, just a monitoring one, and it was only really noticeable when no music was playing. Clearly Phonic have had to make savings, and it's obviously much better to do so in the monitoring system rather than the audio stream itself, but the noise was still rather annoying after prolinged listening.

Getting the S/PDIF Ins working proved unexpectedly confusing, and even had me shutting down my PC, swapping the Firefly with a nearby RME Fireface and checking that it worked with the same input source, leads and Cubase setup (it did, without trouble). It turned out that the clock rate of the 302 and the input devices have to be manually matched, even if the Firefly software is asked to automatically slave from an external master clock. In short, the sample rate detected in the input signal doesn't seem to override the manual sample-rate setting, although what other purpose the automatic mode serves is beyond me. Perhaps I'm missing something.

Matching the sample rates is easily done, but the Control Panel software has an annoying habit of resetting itself if the relevant 'Apply' buttons are not checked at every stage. This means that one can easily think that everything is correct only to find that it's not! Another issue is that the Cubase input meters cease to register audio when the Phonic Control Panel is open, so it is necessary to quit the Control Panel each time a change is made, to see if it has had the desired effect.

Nowhere in the manual does it clearly state exactly what can be input or output concurrently, but I managed to use the stereo analogue inputs together with a stereo S/PDIF signal and a microphone at the same time, thereby producing five simultaneous inputs, which isn't bad going for a £99 interface.

For anyone who doesn't need a huge number of recording channels, but still wants the option of recording at high sample and bit rates, the Firefly is an attractive option. The Control Panel software could be improved to make operation a bit less trial-and-error, or at least the manual could do a better job of explaining the variables, and there are also some niggling compromises in the hardware design. Nevertheless, none of the above issues affect the all-important audio and, on the positive side, there is no other Firewire product offering so many simultaneous inputs at this price.

The Firefly 302 provides a very cost-effective way of recording small ensemble performances at high sample and bit rates, although with some of the obvious compromises you might expect at this price point.

The Firefly 302 provides a very cost-effective way of recording small ensemble performances at high sample and bit rates, although with some of the obvious compromises you might expect at this price point.

The A-Z Of Audio Interfaces
1 month 13 hours ago.