One of the groundbreaking aspects of the Minimoog was its easy–access, front–panel design. Unlike modulars of the time with patch cords, cramped faders and other fun but tedious controls, the Mini was a synth you could play. If you didn’t like the sound, you could just reach over and grab a knob or flip a switch on the fly. Programming FM synthesis can be tedious too — the classic DX7 used a single one–line display to edit six Operators (oscillators), each with individual envelopes, as well as mixing and modulating.

Image Line’s other FM soft synth, Sytrus (reviewed in SOS March 2006), is typical of computer–based FM synthesis, with multiple pages available for programming. The new Toxic III, however, is a different FM animal, since it uses just one editing page. And unlike some simplified programs, Toxic is not ‘FM for dummies’; nor is the frequency–modulation element a limited, tacked–on feature. Toxic is a fully–fledged FM synthesizer, and although there are some things you can’t do with Toxic that you can with its full–featured brethren, anything you can do is done faster on Toxic.

The Master section along the top takes care of general settings such as polyphony, portamento and preset management. It also includes a Unison mode, to thicken up your sound, and a global envelope. The global envelope won’t affect anything if the Operators themselves aren’t sounding, of course, but it is a quick way to shape what is there. Directly below the Master section are all six Operators. They are stripped–down in comparison to many modern FM synths, and more like the original DX7 operators, albeit with even simpler envelopes.

While tuning is important for subtractive synthesis, detuning is the heart of FM synthesis, and the Operator controls include Pitch, Detune and Pitch Offset knobs. There is also a start Phase setting for each Operator and a Free button to turn on and off the key–sync; both of these controls can have a more noticeable effect when the Operator is modulating another Operator. To the right of each Operator is a standard envelope, which adds an initial start point and velocity sensitivity to the standard ADSR controls.

There are 30–plus wave-shapes available for the Operators, including custom WAV files. Clicking an Operator’s Shape window turns it on and brings up the wave-shape in the screen. At first I thought you could change the wave by clicking and dragging it, as you can with the sliders and knobs, but instead you have to click on the smallish name area above the wave screen to open a drop–down menu. The active area is small, and can slow down fast programming.

Below the Operators are the two LFOs, one filter and three effects, all of which are pretty standard. The LFOs have the same wave-shapes as the Operators, including a clutch of square and pulse shapes which can be used for trance gate effects, but work just as well as complex LFOs or sound sources. There are also four noise sources, but unfortunately each is derived from a pitched base, so many synth techniques involving ‘pure’ noise are unavailable. As for the effects, I’m not a fan of graphic EQs, especially ones with only eight bands. The Chorus and Delay units are typical keyboard spice, though they do have a couple of interesting controls: the Chorus includes Invert buttons for the polarity of the feedback and wet signal, which instantly changes the essence of the effect, while the Delay includes a Blur knob, which smears the individual echoes and gives a reverb–like aspect to the output, like the spring reverb on an analogue tape echo.

For FM synths, the Modulation Matrix is where the action is. Without the matrix, Toxic is just another six–oscillator subtractive synth. Pick an operator from Column A and feed it into Row B and you have instant frequency modulation. The secret to FM synthesis lies in the frequency ratios between the modulator and carrier, and how the modulator’s amplitude envelope changes the carrier’s timbre over time. The matrix makes it easy to hear and keep track of these changes. Below the Operator modulation section are similar rows for mixing the Operators’ outputs, assigning each LFO to amplitude for tremolo effects, and a pitch control section. Clicking on the MIDI button at the top of the matrix brings up the controller assignments page, while the Seq button reveals a 64–note sequence/arpeggiator.

Since these last two are pretty much set and forget, most of your programming really can be done from a single page, which is why I started off talking about the Minimoog. That instrument brought together the most useful components of analogue synthesis in one easy–to–control package. Toxic does the same thing for FM synthesis. Programming that entailed some work on Sytrus is instinctive and quick on Toxic, with no detours to sub–pages to uncover what was going on. What you lose in depth of programming you make up in ease. There are no multiple LFOs for each Operator, or assignable envelope generators and such. What there is, however, is basic FM synthesis. For some the trade–off might not be worth it, but if you are more of a player than a programmer, Toxic will get the job done with the minimum of fuss. Alan Tubbs

Until now, Homegrown Sounds have primarily been involved with sample-library production, specialising in pad and atmosphere sounds. Astralis represents their first synth product and is, in fact, sold as a ‘pack’ combining two versions of Astralis; version A offers a dual synth format while version B provides a more CPU–friendly single-synth format, but with otherwise similar features. Both synths are supplied with a large bank of preset sounds to get new users started. Also included is a system for creating micro–tunings, suitable for producing non–Western music. A large number of micro–tuning presets are included, covering 12–tone, Middle Eastern, Indian, African, Pipes and Greek scales amongst others. A third synth, Astralis C, is in development and will be made available as a free download to registered users when complete. This will be sample–based. 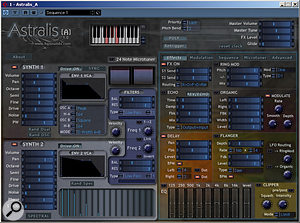 Astralis includes an excellent combination of effects options, including Drive, Reverb, Delay, Ring Modulation and ‘Organic’ (a further delay–based effect). For me, however, the highlights are the Arpeggiator, Modulation Sequencer and Envelope Gate Sequencer. Whether you want disco–style arpeggios or trance–style rhythmic gated effects, Astralis has plenty of potential. Usefully, the mini–keyboard at the top of the screen can be used to trigger a combination of notes, and these are held on while editing sounds — perfect for setting up an arpeggio or gated effect.

The presets do an excellent job of demonstrating what Astralis is capable of. There is some truly wonderful stuff amongst this lot, from scary sci–fi pads and soundscapes through to trance–friendly, mod–sequenced, analogue–style bleeps. The presets also demonstrate that Astralis can do both subtlety and in–your–face aggression. If there is a down side, it is simply that the documentation could be more comprehensive. The on–line help is a good start, but the sheer range of programming options available could give some new users a bit of a headache without a little further guidance. That said, Astralis is most likely to appeal to those who have an addiction to knob twiddling, and random experimentation may be half the fun.

In testing with Cubase 4, I didn’t experience any particular technical problems with Astralis. Even at the full price of £30, this is a lot of sound for a very modest price. There are some excellent audio examples on the Homegrown Sounds web site but, even better, a time–limited fully functional demo is available for download, so potential buyers can try before they buy. Astralis is certainly well worth auditioning. John Walden