It can be difficult to improve upon a proven product but, when the chaps at XILS Lab decided to enhance their XILS3 v2 soft synth (which was based in large part upon the EMS VCS3), they hit on a rather spiffing wheeze. Rather than tweak their model of the VCS3 still further, they decided to adopt the concepts of 1969’s legendary EMS VCS4. Only ever built as a prototype, this combined two VCS3s positioned side–by–side, plus a keyboard, mixer and additional signal processing. (A second VCS4 prototype resurfaced some years ago, but this was merely a modified VCS3 and was ditched by EMS in favour of the Synthi A and KS.) 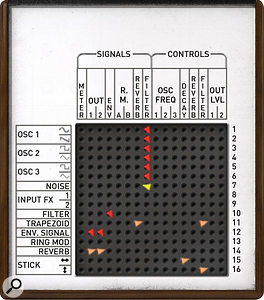 The ‘pins’ in the XILS4 matrix offer continuously variable resistance values.You can license XILS4 using iLok or a dongle–based eLicenser, or (for the appropriate cost) upgrade an existing XILS3 or XILS3 v2 licence, whereupon the protection will allow you to run all three synths simultaneously if desired. I upgraded XILS3, which proved to be quick and painless although, as before, XILS4 doesn’t run as a stand–alone application, only as an RTAS, AU, AAX or VST2.4 plug–in.

Users of the original XILS3 will find numerous changes in XILS4 although, to be fair, many of these were introduced in XILS3 v2. Indeed, if you treat XILS4 as a pair of XILS3 v2 synthesizers that can be used in series or parallel, with a single sequencer but additional options in the keyboard and sequencer matrices, you won’t go far wrong.

As a user of the original XILS3, I particularly like the redesigned and more colourful GUI, and the new ‘virtual’ patch pins also deserve special mention. 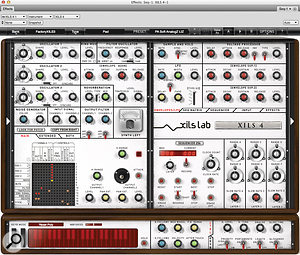 Whereas the original XILS3 provided eight types of pin offering preset amounts of positive and negative connection between modules, the pins in XILS3 v2 and XILS4 act as potentiometers, allowing you to dial in (where appropriate) the wanted polarity and level of the connection, making it possible to fine–tune your sounds in ways that weren’t previously feasible. I’m also grateful for small but important upgrades such as the larger, pop–up patch matrices that allow ageing, hyperopic keyboard players to see what’s connected to what, and by how much. On a more trivial level, but nonetheless welcome, I like the addition of a phaser in the effects panel, because this was an effect widely used with EMS synths.

No two VCS3s sound or respond identically, so I’m not overly concerned that neither XILS3 nor XILS4 precisely emulate my VCS3, especially since they’re polyphonic and offer all manner of modern programming and performance options. I’m also largely unconcerned by the odd bug or two, which will no doubt be ironed out in time. Ultimately, XILS4 is a remarkably deep and powerful soft synth, capable of prodigious feats of synthesis and external signal processing. If you’re prepared to put some time and effort into it, you’ll find it to be a fascinating and flexible instrument, and I doubt that you’ll ever plumb all of its possibilities or fail to discover new sounds using it. Gordon Reid

Multiplex Vocoder is not a plug–in, but a stand–alone application that can host other plug–ins. Its job is to turn pretty much anything you throw at it into a vocoder carrier signal which can then trigger up to five vocoders at a time. As its name suggests, it does this using a simple but effective matrix system which can route multiple inputs to different vocoders and mix the outputs. It does all this using whatever VST or AU instruments are installed in your system, as well as giving you the option of adding plug–in effects.

For anyone who has never played with a vocoder, it requires two sound sources to work. The first is the sound to be processed, which in this case is any VST or Audio Unit instrument on your computer. This needs to be triggered by your MIDI keyboard, and the MIDI input will usually dictate the notes that are played as well. The second sound source is called the modulator: this is most often a vocal, though any signal can be used. This is then analysed to create a filter signature which is then applied to the first sound. It is only when you speak into the mic that sound will be triggered, and the filtering will make the carrier sound follow the inflections of your voice. In Multiplex Vocoder, modulator signals can be derived from one of two microphone inputs or an audio file player, which allows you to play any file from your computer into Multiplex Vocoder and use it as the carrier signal.

So why do we need Multiplex Vocoder? Well, this application’s great strength is its flexibility, thanks to its ability to address multiple instruments at the same time. Filling the five slots with five instances of Native Instruments’ Massive, I was able to build up a rich layered sound, using slightly different presets to make a more complex tone. You can of course use completely different instruments to get even more variety, and if you want to stretch the tonal palette still further, you can add up to two effects plug–ins per instrument. Each instrument slot has a three–band parametric equaliser section as well as high– and low–pass filters. An output mixer allows you to vary the mix between the various instrument slots. Each slot can also be muted although, sadly, there is no solo function, which would help when you are trying to work out which sound is which. There is a master channel also with its own equaliser and plug–in slots, which come in handy for a bus compressor to keep your synthesized excesses under control!

The input section allows you to set levels for the two microphone and one playback channels. The microphone inputs have a high–pass filter option which can help with maintaining intelligibility. There is also an option that allows you to morph from the dry signal to the wet. The top right of the screen gives you more matrix options, allowing different instrument slots to respond to the different inputs. You can of course record your outputs, and in fact there are several ways to do so. As it’s not a plug–in itself, to make Multiplex Vocoder’s output appear within your DAW you will have to route the signal in and out using a third–party router such as Soundflower (Mac) or Jack Audio (Windows). This is relatively easy and shouldn’t put you off.

I found Multiplex Vocoder simple to use, and had it running quite quickly and happily using the built–in microphone on my laptop. You do have to remember that anything the microphone picks up will trigger a sound from any note the keyboard is holding down, so an external microphone with a tight polar pattern will help. It is such a cheap bit of software I’m sure it will make its way into many people’s tool kits. Even if you don’t use vocoders that often, I can guarantee you’ll have fun with this one! Jon Burton