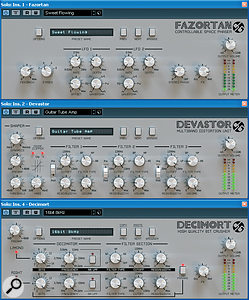 D16 Group are a Polish development team whose plug‑ins have an old‑school flavour, but their Silver Line effects and processors stand out from the crowd of vintage emulations. D16 appear to be less interested in your classic Neves and Pultecs, and more in the design quirks and technological limitations that gave older electronic instruments their individual qualities.

Reducing the bit depth and sample rate of a digitised signal is a fairly simple business, so it's a source of constant wonder that it can yield such individual and widely varied results. There are still samplers and drum machines from the '80s that command high prices because of the particular brand of crunchiness they impart to the source, and of all the innumerable 'bit crushing' effects, no two ever seem to sound quite the same.

D16's Decimort is the first such plug‑in I've encountered that includes presets emulating the sound of classic hardware like the Akai MPC60, Emu Emulator, Casio FZ1 and so forth. The signal path begins with a preamp control, which imparts a crunchy, solid‑state clipping distortion when you ramp it up, before the left and right channels pass through independent but linkable bit‑depth and sample‑rate reduction stages (I'm unsure why you'd ever want to unlink them, personally). These are followed by an anti‑aliasing filter and a conventional resonant filter that offers all the standard filter responses.

Not being lucky enough to own an MPC60 or similar, I can't vouch for Decimort's accuracy in emulating classic samplers, but I was very impressed by the sheer range of nasty noises that you can make. All manner of fizzing, ringing, clanging and crunching effects can be applied to almost anything; drums are the most obvious candidate, but if, like me, you retain a weird nostalgia for the sound you got by plugging your first electric guitar into the mic socket on your parents' music system, the preamp distortion will get you surprisingly close. Ugly, but mostly in a good way.

Devastor likewise sounds like a sinister figure from a JK Rowling book, but is actually a distortion effect. It's billed as a multi‑band plug‑in, but isn't, at least as I understand the term. There's only one distortion element in the signal path — a preamp stage similar to that found in Decimort, offering an emulation of analogue 'diode clipping' distortion, with Threshold and Knee controls. The multiplicity resides in the addition of three separate filters, again similar to those found in Decimort. Any or all can be placed before or after the clipper in the signal chain, and where two or three of them are in the same position, they operate in a parallel configuration.

Again, many of the presets are designed to emulate the output stages of various pieces of vintage hardware, in which capacity they generally do a fine job of adding a certain wonky character to the source. Ramp up the clipping and you can get some absolutely brutal fuzztone effects, and although the presets called 'Guitar Tube Amp' ought to win some sort of award for sounding absolutely nothing like a guitar tube amp, there is certainly something on offer here for adventurous guitarists, especially if you can pair Devastor with a cabinet simulator to tame some of its innate fizz.

Redoptor, meanwhile, turns out not to be a small but vicious predatory dinosaur of the late Cretaceous era, but another distortion plug‑in. A preamp gain control with high- and low‑cut filters precedes a valve distortion emulation with Tube Bias, Tone and Brightness controls, which is followed by a four‑band parametric EQ. Although some of the presets use this EQ to try to mimic the frequency response of a guitar amp cabinet and speaker, the emphasis is, again, on other types of valve gear. Not all the controls do what you'd expect — Tone, for example, starts off thin and trebly and gets progressively more mellow as you turn it up — but together they allow you to replicate anything from barely noticeable warmth to almost pure white noise.

Last in the Silver Line collection at present is the Fazortan phaser, which, well, phases. It's a warm‑sounding, convincingly 'vintage' effect that does pretty much what you'd want from a phaser. Many DAWs come with pretty good bread‑and‑butter effects these days, but if you're unhappy with the modulation effects in your own sequencer, Fazortan would be well worth a try.

Overall, I like the Silver Line collection a lot. The user interfaces are simple yet classy, with some of the nicest virtual 3D knobs I've yet seen, and for a modest price, these plug‑ins offer something that is authentically 'vintage' yet also rather different from the bulk of what's out there. Sam Inglis

Described as having a "biological approach to sound creation”, Synplant's beautifully designed graphic interface is a huge departure from the norm, featuring a spherical Bulb containing a randomly‑generated 'Seed'. From this you can grow gently waving Branches, one in each of the 12 different directions of the outer Key Ring. Each branch corresponds to one note in the musical octave, and the longer you drag a branch from the original seed with your mouse, the more the sound parameters of that note in every octave alter from the seed sound.

The idea is to refine the branches you prefer, so if, during your sonic journey, you grow one with a sound you particularly like, you can Clone it to all branches so that every note of the scale plays the same sound, and then further refine each one. The mod wheel can grow or retract all branches simultaneously, and you can at any time plant a new, randomly generated, seed to start afresh.

There are various more traditional controls around the bulb and beneath it, but Atonality is certainly new. In essence, it sets the balance between musical tones and weird effects, stretching scale tuning and modulation depth, and generally introducing more mayhem to the proceedings with larger settings.

Another collection of more traditional controls appears when you click on the Manipulate Genes button, overlaying the main display with a DNA‑like helix, each component of which acts as a slider for a parameter. I counted 37 parameters in total, some with familiar names, others rather more obscure, although I can tell you that this synth has two oscillators per voice with morphing waveform options, FM and sub‑oscillator options, two filters in parallel, a complex envelope generator, plus various LFO and sample & hold modulators, and is surprisingly versatile.

By now, some of you must be convinced that this is an April Fool concoction, but nothing could be further from the truth. Synplant's creator is Magnus Lidström (who created Reason 2's Malström synth), and his mission with Synplant is to help those who want to develop the perfect sound using their ears, rather than by blindly clicking through hundreds of presets.

So what type of sounds can it grow? Well, Synplant offers 550 factory presets covering basses, leads, pads, and loads of evolving sounds and sound effects. However, by adopting this novel interface, many of the parameters can have complex relationships with each other, and Synplant definitely has its own unique sound character, ranging from traditional synth sounds through soft organic creations to harder‑edged electronic ones. Particularly distinctive are its looped-attack envelopes, used to good effect with repeated attacks and complex pitch‑bends, its FM modulation and sample & hold effects, while having up to 12 different branches per seed allows unusual sounds where each note you play has a slightly different timbre, or triggers an entirely different percussion sound.

There's a rotation control that alters which note is allocated to which sound, and automating this lets you trigger ever‑changing sounds while playing the same tune. Automation of the mod wheel to grow and retract the branches in real time also produces some stunning effects. You can also assign your choice of MIDI controller to any of the controls, for more hands‑on horticulture. Some might find this GUI too novel, since you never quite know what sound might emerge next, but if you have a boring patch that deserves some tender loving care, Synplant will definitely grow on you. I've already harvested a crop of unique sounds ready for my next album! Martin Walker