Is this a versatile mic that shines out as a bargain for the home‑studio recordist — or is it as light on features as it is on the pocket? 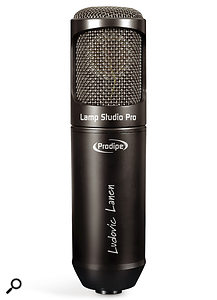 Endorsed by engineer and producer Ludovic Lanen, the Lamp Studio Pro from French manufacturer Prodipe is a valve mic that offers nine polar patterns and is built around a 34mm-diameter, dual‑membrane, centre‑terminated capacitor capsule. The mic comes in a large camera case, along with its external power supply, which features a nine‑way rotary switch for pattern selection, a switchable low‑cut filter and switchable 10dB pad. A slide switch selects 120V or 230V operation, and the mic connects to the PSU via the supplied seven‑pin XLR cable. Also included is a metal‑frame shockmount, plus some spare elastic hoops for it.

Nothing seems unusual about the mic's black casework; it follows the typical side‑address format with a dual‑layer mesh screen around the capsule. However, both the internal and external construction of the mic and PSU are of a high standard. Decent-quality electronic components have been used throughout, including WIMA capacitors, although there's no famous maker's name on the output transformer — so I assume this is one area where build costs have been kept down. The valve is a Chinese‑made 12AX7B, so affordable replacements are easy to come by.

You can usually get a good idea of a mic's character by looking at its frequency-response graph, and there's one for the Lamp on Prodipe's web site. This response has a definite 'smile curve', tipping up by 5‑6dB at both the low and high ends of the spectrum. The shape of the graph varies slightly as you switch patterns, which go from omni, through various widths of cardioid, to figure‑of‑eight, but the general 'scoop' shape is similar for all. At the high end, there are two areas of presence boost, a gentle one around 3kHz and another at 10‑12kHz, again varying in strength as you switch patterns. This mic also features a lot of low‑end extension in all pattern modes, which is useful, but also means that in some applications, such as vocal recording, you might benefit from switching in the low‑cut filter. 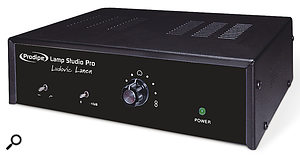 A generous nine polar patterns are switchable from the included PSU.

Tube mics take a while to warm up and give of their best, so I left this one to cook for around 20 minutes before proceeding further. My spoken‑word test showed the mic to have a lively and articulate high end, augmented by some low‑end chestiness, and I had to engage the low‑cut filter to completely eliminate popping, even with a pop shield in place. This type of tonality often works well with female singers and has some commonality with the (rather more expensive) AKG C12VR, so I made some recordings of similar material with both, to give you an idea of how they compare. As we always emphasise, if a mic is likely to be used a lot with one particular singer, check it out with that singer, if you can, before deciding whether to buy. The more character a microphone has, the more likely it is to suit some singers better than others.

Trying the Lamp on electric guitar, I found that miking the speaker close to the edge produced a brighter‑than‑ideal tone, but a little gentle EQ knocked it into the right ballpark. However, I then tried to capture the sound I could hear in the room by moving the mic off to one side of the speaker, so that it was around 400mm to one side of the speaker centre and about 500mm in front of it. This gave a much richer, less edgy tone that came very close to what I was hearing from the amp. While this tendency to flatter the high end makes it more difficult to get the right sound from electric guitar, it could work very well on other sources, such as acoustic guitar, if you're trying to get them to cut through a busy mix.

The Lamp Studio Pro is a very capable microphone; surprisingly so, given the affordable price. It isn't a neutral mic — it definitely imparts a tonal character, which means that it will be better suited to some situations than others — but it certainly isn't over‑coloured, and can easily be fine‑tuned using EQ. It is quiet enough for typical studio close‑miking applications and will handle most loud sound sources with the pad switched in, although, as with most valve mics, it is slightly noisier than an equivalent solid‑state model, so some care may be needed when working with quieter or more distant sound sources. If you like the idea of a tube mic that can be used in lots of different situations, but you have a limited budget, the Lamp might just be the light at the end of the tunnel!

There are many low- and mid‑priced valve microphones offering three or more polar pattern variations, some of the more popular being the AKG Perception 820, the Rode K2 and the Studio Projects T3. All offer a slightly different tonality, so try to compare as many models as you can to see which one suits your voice.

The Lamp Studio Pro is not without its competitors, but it offers a good balance of features and cost, while sounding warm and musical in use.