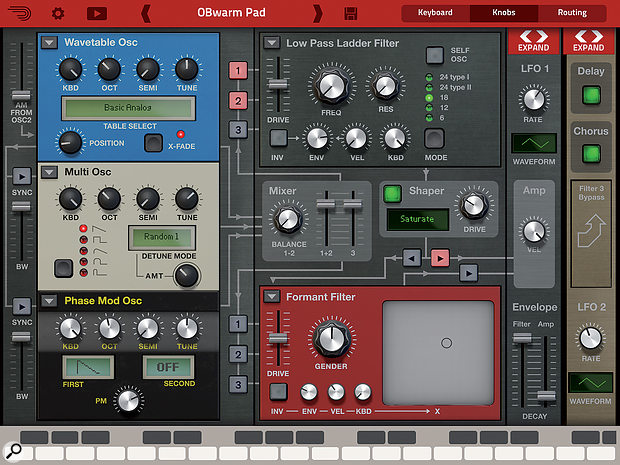 Prophet, Prodigy, Jupiter, Andromeda, Trinity... You just can't beat the grandiose overtones of a good synth name. Propellerhead clearly think the same way, and named their first iOS synth after the hammer-wielding, mountain-crushing, iron-gloved god of Norse mythology. If that isn't a statement of intent, I don't know what is. Thor is new to the iPad, but in fact it isn't a brand-new design, having first appeared as one of the bundled devices in Reason in 2007. It requires iOS 5.1 or later and an iPad 2 or later is recommended.

Thor's architecture is interesting; it's a standard subtractive design, but semi-modular. Up to three oscillators (with sync and AM options) feed a mixer, two parallel filters and a waveshaper, before hitting a final 'global' filter, delay and chorus. Loads of user-configurable routing options let you choose which filters are applied to which oscillators, and how the shaper comes into play (if at all). But this is not the half of it, because each oscillator 'slot' can be filled with one of six different types: two different analogues, wavetable, FM, Casio CZ-inspired 'Phase Mod' and a good noise generator. Meanwhile, there are four distinct designs for the filters: a Moog low-pass ladder design with variable slope, a versatile multi-mode 'State Variable', a Comb, and a fine-sounding Formant with variable gender, ideal for vocal-style treatments. Consequently, Thor has a chameleon-like quality, able to take on many radically different sonic characters. Animating it all are four envelope generators: two conventional ADSR types, a loopable and sync'able ADR with an initial Delay stage, and an all-singing DAHDSR. Add to that two 18-waveform LFOs, a step sequencer capable of generating multiple simultaneous modulation streams, and a big modulation matrix, and you start to see the potential on offer.

In a market where every single new synth promises searing leads and phat (groan) basses, it turns out that Thor can do those and an awful lot else besides.

Anyone who's used Thor in Reason will know that it's a big old thing, and on the iPad Propellerhead have spread the interface over three screens, with a couple of collapsible sections for the Knobs screen. It all feels very clear and organised, and the on-screen keyboard implementation is particularly flexible.

Velocity is determined by tap position and aftertouch by subsequent vertical drags, Animoog-style. The pitch compass is variable between one and eight octaves, and incorporates modulation and pitch-bend areas. The Assist/Collapse functions let you design keyboards based around specific key and scale types. This goes further than Animoog's Scale feature too, in providing quick access to 12 musically related 'tonalities'. Finally, Strum and Hit pads let you 'stop' notes on the keyboard but trigger them with a swipe or tap elsewhere.

As for the sound, there's way more flexibility than Thor's warlike epithet would suggest. In a market where every single new synth promises searing leads and phat (groan) basses, it turns out that Thor can do those and an awful lot else besides. It seems especially given to harmonically complex timbres, but it's not difficult to tease out more standard fare too, some of it reminiscent of analogue and digital hardware. Choirs and voices are especially impressive, thanks to the formant filters, and many fine presets (of which over 1000 are provided) demonstrate the potential for sophisticated evolving and sequencer-animated timbres too.

All in all, Thor is a stunning bargain at £10.19$14.99. At this point in time, it's probably iOS's most versatile synth, and its Audiobus compatibility makes the lack of reverb (and some other effects) much less of an issue. I really appreciate the fact that it's fully-featured from the get-go, too, with no in-app purchases required.