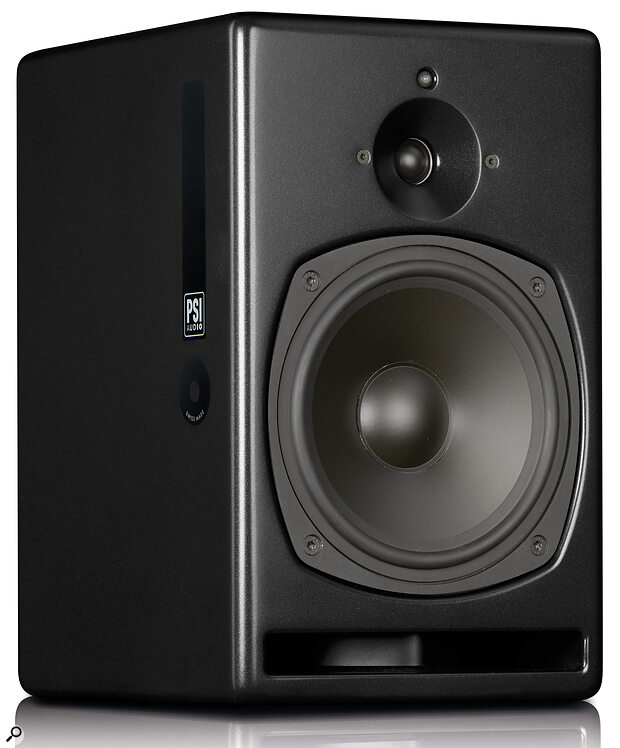 PSI’s two‑way monitors are more expensive than many three‑way models. Do they justify their cost?

Manufactured in Switzerland and aimed at serious professional applications, PSI monitors are notably free of the kind of cost‑driven design compromises that are typical of entry‑level products. So, despite its relatively compact dimensions and conventional two‑way format, the PSI A21‑M comes with a hefty price tag. Does it nevertheless represent good value?

The A21‑M has actually been reviewed in SOS before, back in July 2011. However, the model has recently undergone significant upgrades, most notably the integration of a new tweeter designed and manufactured in house.

The A21‑M is traditional in appearance, especially if ordered in the slightly sparkly dark grey finish of the review pair rather than PSI’s traditional crimson. A nominally 21cm‑diameter bass/mid driver, a waveguide‑loaded tweeter and a slot reflex port populate the front panel, while around the back you’ll find an aluminium heatsink and a connection panel. The wooden enclosure is of conventional rectilinear form, with front corner radii that will help reduce edge diffraction, and the reflex port newly incorporates PSI’s ‘Flow Guide’ arrangement, designed to encourage laminar port airflow and to discourage ‘organ pipe’ resonances.

The A21‑M’s outward ordinariness hides a couple of interesting and unusual proprietary technologies. The first is something PSI call Compensated Phase Response, or CPR for short. Speakers, by their very nature, are reactive systems composed of components that have mass and compliance, so their output doesn’t necessarily occur instantly on the arrival of an input. PSI’s CPR technology is designed, at the cost of a little overall latency, to realign things so that the monitor output more accurately reflects its input in the time domain. There’s two things to note here, however. Firstly, CPR can do nothing about the inter‑driver timing ‘errors’ that result from their different positions in space. Move your ears to a location that’s closer to the tweeter than to the bass/mid driver and, sure as night follows cliché, the tweeter output will arrive before the bass/mid output and a phase discontinuity will arise. Secondly, CPR works only down to around 200Hz, and so makes no attempt to compensate for the latency (more technically known as group delay) inherent to the A21‑M’s reflex bass loading. I suspect one reason for this is that compensating for low‑frequency group delay would result in overall system latency becoming an issue. As it is, the overall latency introduced by CPR is said by PSI to be a fairly benign 0.5ms.

PSI’s second unusual technology is Adaptive Output Impedance. AOI comprises a feedback mechanism that uses a measure of the current flowing through the driver voice coils to adjust the amplifier output and make it more accurately follow the input signal. This works because a driver’s acoustic output is defined more by the current flowing through its voice coil than the voltage at its terminals. In a conventional amplifier/driver arrangement, the voice‑coil current is modulated by all sorts of dynamic changes in driver impedance. For example, voice‑coil inductance varies with diaphragm position; this will modulate the impedance, which will in turn change the current independently of the amplifier output voltage. Similarly, voice‑coil resistance increases with temperature, so as the coil gets warmer in use, the current flowing through it will reduce and the driver output will fall. Measuring the instantaneous current in the voice coil enables the amplifier output to be dynamically adjusted to match the input signal more closely, correcting the effect of changes in the driver impedance. It’s a neat idea that can significantly reduce distortion and compression and, to my way of thinking, it appears in active monitors rather less often than perhaps it might.

PSI have actually been manufacturing tweeters for around 40 years, since the days when their monitors were sold under the Studer brand. The in‑house design now being used in the A21‑M is based on that originally developed for the A25‑M. It’s also similar to the in‑house tweeter now incorporated in the A14‑M and A17‑M, but as the larger bass/mid driver of the A21‑M requires a lower crossover frequency, its design has been revised to provide greater dome/voice‑coil displacement. It’s a conventional‑looking 27mm‑diameter fabric‑dome tweeter, mounted at the mouth of a short conical waveguide, and PSI say that one of the significant driving forces behind its introduction across their monitor range was performance consistency. The OEM tweeters used previously were unable to consistently meet PSI’s demanding performance requirements.

The tweeter is paired with a thermoplastic‑diaphragm bass/midrange driver, again manufactured in‑house, which has a nominal 210mm chassis size. In decades past, it was pretty common for two‑way monitors and hi‑fi speakers to be based on a 200mm (eight‑inch) bass/mid driver. However, for a variety of technical and market‑driven reasons, two‑way bass/mid drivers have tended to get a little smaller. One of the technical reasons for this is that it’s tricky to keep resonant control of a larger diaphragm into midrange frequencies with a roll‑surround component that doesn’t contribute too much low‑frequency mechanical damping. The fact that PSI can make the larger bass driver of the A21‑M work well in this regard says much about their skill and the quality of their electro‑acoustic engineering.

The rear‑panel heatsink and connection panel that I mentioned earlier is home to just a mains input socket, balanced XLR analogue input socket and two variable pots: one for input sensitivity and one offering variable low‑frequency roll‑off from 200Hz downward. The LF roll‑off control is intended to enable fine tuning in installations where the proximity of room boundaries results in too much low‑frequency gain. One detail that illustrates the no‑compromise engineering in the A21‑M is that the amp assembly is not only isolated in its own enclosure, but also mechanically decoupled from the cabinet by compliant mounting bushes.

The 280W bass/mid amplifier, rather than sporting conventional Class‑A/B or contemporary Class‑D architecture, is described by PSI as a Class‑G/device. Class G/denotes an amplifier topology that incorporates multiple power supply rails at different voltages. When the signal level is low, the amplifier runs off a low‑voltage supply rail, and when the signal level increases, the amplifier switches to higher‑level voltage rails to accommodate the peaks without clipping. The advantages of Class G/over Class A/B, say PSI, are reduced distortion, higher efficiency and lower heat dissipation.

Diagram 1: The A21‑M’s frequency response, measured on‑axis (purple trace), and 30 degrees above and below (blue and green traces, respectively).

Diagram 1 shows three measurements of the A21‑M’s frequency responses. One was taken with the mic positioned on a perpendicular axis halfway between the bass/mid driver and tweeter, and one each was taken 30 degrees upwards (towards the tweeter) and 30 degrees downwards. The axial response is very tidy, with no obvious problems or suspicious‑looking bumps. Any apparent lack of high‑frequency extension is the result of the mid‑driver mic position being slightly off the central axis of the tweeter. The ±30‑degree curves show the expected drop in HF off‑axis, along with the expected interference suck‑out around the crossover frequency. This is where the different path lengths between the drivers and the mic results in their outputs arriving at slightly different times (putting them out of phase) and their energy cancelling. Such suck‑outs will almost always occur to some degree with non‑coincident multi‑driver monitors. 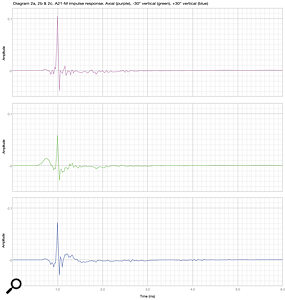 Diagrams 2a, 2b and 2c: The A21‑M’s impulse response, again measured on‑axis and 30 degrees above and below.To investigate the phenomenon a little more, Diagrams 2a, 2b and 2c show the A21‑M’s impulse responses associated with the three measuring mic positions. If PSI’s CPR (Compensated Phase Response) technology is doing its job in compensating for system phase changes, this should result in a clean and compact impulse response. And that’s what Diagram 2a reveals. The axial impulse response is notably compact and shows little of the ringing and smearing that’s typical of many monitors. Diagrams 2b and 2c do so show some smearing of the impulse and that’s simply because, with the measuring mic not equidistant from the two drivers, the individual arrival of their outputs is discernible. Diagram 2b shows the 30‑degrees down response, in which the bass/mid driver is closer to the mic, and that’s witnessed in the impulse response as an arrival of energy before the sharp peak of the tweeter output. Conversely, in Diagram 2c the tweeter is now closer to the mic so its peak is the first feature. Both graphs, however, are free of resonance and ringing, evidence that CPR results in genuine benefits to objective performance.

My final chunk of analysis, illustrated in Diagram 3, was to investigate the A21‑M reflex port and check for resonant output in the band above the port’s intended reflex resonance. One of the refinements of the new A21‑M is the introduction of PSI’s Flow Guide port design, which is intended both to improve airflow linearity and to reduce the likelihood of organ‑pipe port resonances. Without having the older version to compare, it’s impossible to know if Flow Guide has improved port linearity, but in terms of resonant features above the reflex resonance (at just above 40Hz) the A21‑M shows a very clean result.

Listening to the A21‑M, with some favourite reference tracks and Pro Tools mixes lined up, it was obvious from the first moment that it’s an extremely fine monitor. It sounds precise and correct at any volume level from quiet to loud. The balance is neutral, the midrange is detailed and uncoloured, and the bass, while obviously reaching down a long way, is clean and free of obvious reflex effects. I recently experienced a monitor that was prone to showing off its extended low‑frequency bandwidth by ceaselessly emphasising the bottom octave, and the A21‑M does none of that. Its bass is clearly extended, because it renders audible low‑frequency information that smaller, more bandwidth‑limited monitors will miss, but it does so with control and precision.

The quality and fundamental accuracy of the A21‑M extends all the way through the audio band. There was nothing about its subjective performance that caused me even the slightest raising of an eyebrow.

The quality and fundamental accuracy of the A21‑M extends all the way through the audio band. There was nothing about its subjective performance that caused me even the slightest raising of an eyebrow. Voices and acoustic instruments sound just as they should, almost completely free of ‘speaker’ character, and stereo imaging (a really strong indicator of general quality) was really sharply focussed and precise. One of the great benefits of really good imaging performance is that it makes reverb character, both in terms of added effects and inherent room sound, much easier to discern and make artistic judgments on. That’s very much the case with the A21‑M.

The new PSI tweeter is a success also, primarily because it does nothing to draw attention to itself. Tweeters are at their best, I think, when you don’t specifically notice their presence, and that’s the case with the A21‑M. As with the A21‑M’s character through the midrange, there’s an ease to the tweeter’s performance. It’s neutral in terms of tonal balance but still informative and delicate. And in writing that its character through the midrange and high frequencies seems consistent, I realise that the word I’m looking for to describe the A21‑M generally is ‘coherence’. The A21‑M sounds reliable, natural, detailed and convincing all the way through the audio band, and that’s quite an achievement. At the start of this review, I posed the question of whether the A21‑M’s not inconsiderable price is justified. To my mind the answer is undoubtedly yes.

The A21‑M inhabits a market niche populated by quite a few similarly high performance competitors. For example, the PMC6, the ATC SCM20A, the Genelec 8341, the Unity Audio Mini Boulder and the Dynaudio Core 59 are all worth considering.

The lack of cost‑driven compromise in the way the A21‑M is designed, engineered and manufactured shines through in its performance. It’s a great example of what high‑quality monitoring should be all about.