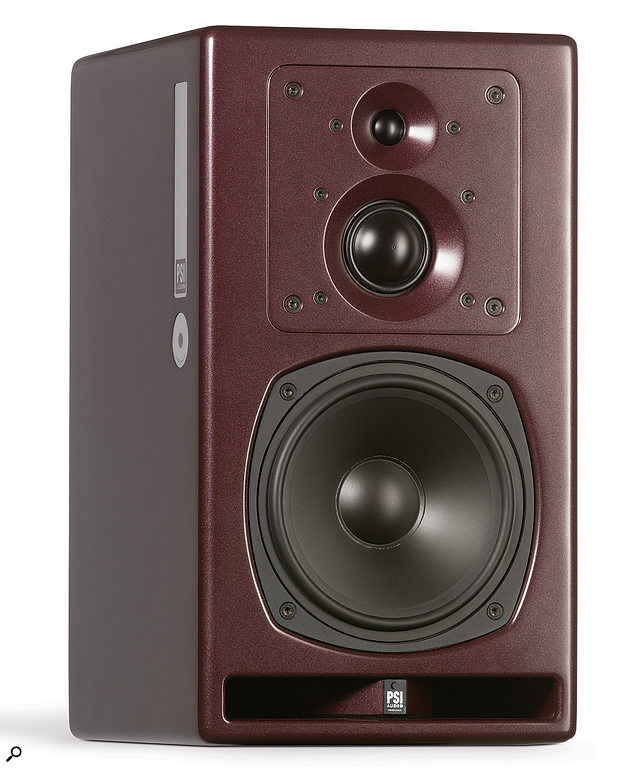 Swiss speaker gurus PSI have never failed to impress us with their technical innovations, and their latest model is no exception!

Swiss–based PSI Audio are one of a group of smaller high-end monitor manufacturers that perhaps fly somewhat under the radar of larger, higher–profile brands, but that doesn't mean that they're not highly capable engineering-led organisations. As evidenced by the new A23‑M, little could be further from the truth. I last reviewed a PSI monitor back in the November 2013 issue when I looked at the A25‑M and, as it happens, was extremely impressed. Now, all of five years later, I'm looking at the A25‑M's new sibling, the A23‑M. Although smaller than the A25‑M, the A23‑M still probably falls more towards the midfield monitor category than the nearfield, and in terms of both weight and size it's just about as big as I can comfortable fit in my studio room either side of my DAW. It's not really a monitor for bijou studio spaces, so be warned. It's also a monitor that demands deep pockets.

The three driver components of the A23‑M are arranged in a similar manner to the A25‑M, a manner that seems to be becoming increasingly popular. A bass driver is accompanied by a mid–range/tweeter module, which can be rotated by 90 degrees. Rotation of the mid/tweeter module is useful because it facilitates installing the A23‑M in either portrait or landscape orientation, while retaining vertical alignment of the mid–range driver and tweeter. This is important because the wavelength at the crossover frequency between the two drivers is typically comparable to the physical distance between them, so at positions vertically off axis, their individual path lengths to the listening position will vary by a significant proportion of wavelength, and that will result in phase changes and response anomalies. Now, while such response anomalies can be relatively benign when vertically off axis, they could constitute a bit of a problem in the horizontal plane, so rotating the mid/tweeter provides a simple fix.

Perhaps you're wondering why the orientation of the mid–range and bass drivers is not so important? It's simply because the wavelength at their crossover frequency is much longer, so off-axis changes in path length to the listening position constitute a significantly smaller proportion of wavelength.

I've spent a paragraph on the arrangement of the A23‑M drivers without describing the drivers themselves, so I'm going to put that right now. Somewhat unconventionally, however, rather than start at the top or the bottom, I'm going to start in the middle. The middle is particularly interesting because it's where PSI's major technical development since the A25‑M is to be found: their in-house mid–range dome driver. Most mid–range drivers in moving-coil speakers are conceptually smaller versions of bass drivers, and that's certainly the case for the A25‑M. Being smaller versions of bass drivers, they tend to display the same set of problems — it's just that the problems kick in at a higher frequency. Dome mid–range drivers are more akin to larger versions of dome tweeters, and while they display a different set of problems, they also have a couple of inherent advantages. Firstly, their total diaphragm and voice–coil mass tends to be significantly lower than equivalent cone drivers (significantly less than half is typical), and secondly the fact that a dome diaphragm is driven around its edge rather than from its centre means there's, in theory, far closer control of diaphragm movement.

Despite their inherent advantages, however, dome mid–range drivers have a reputation among speaker engineers for being difficult to get right. It's not a trivial job to realise the full benefit of the advantages such that they outweigh the potential issues. And those issues? Well, the two significant ones are firstly that in having a much lower moving mass, dome drivers have a much higher fundamental resonance, and this will limit their low–frequency bandwidth and power handling. A cone mid–range driver will have its fundamental resonance most likely below 100Hz, which means its operational bandwidth can extend easily down to take over from a bass driver at, say, 300Hz. A typical dome mid–range driver's fundamental resonance is likely to be north of 300Hz, which means the bass driver bandwidth will be required to extend somewhat into mid–range territory. The second potential issue is that getting a mid–range dome to perform well at the upper end of the required bandwidth is tricky. Typically, as frequency rises, the centre section of the dome will begin to become mechanically disconnected from the outer edge and cause a variety of response and dispersion anomalies.

The solution is brute force engineering of the iterative trial and error kind, and that's both time and resource intensive. Having hinted that speaker engineers tend to shy away from dome mid–range drivers, those who have accepted the challenge and succeeded in making the concept work have come up with some extremely fine drivers, and it's no coincidence that dome mid–range drivers feature in some extremely well-regarded monitors from, for example, ATC, PMC and Neumann, to name just three.

At 56mm in diameter, PSI's dome mid–range driver is a relatively small device compared to, for example, ATC's renowned 75mm dome, and not unexpectedly that means the bass–to–mid crossover frequency is set at a relatively high 620Hz. The PSI dome also takes a very different approach to diaphragm material compared to the ATC driver, by employing a thermoplastic material where the ATC dome uses a coated fabric. One advantage of the relatively small mid–range dome is that it enables the mid driver and tweeter to be mounted relatively close together. This helps with vertical dispersion consistency around the crossover frequency.

All About That Bass

A bass–to–mid–range crossover at 620Hz means that the A23‑M bass driver is required to make a significant contribution beyond the low–frequency end of the audio bandwidth. Middle C, remember, is at 261Hz, so the A23‑M bass driver is more often than not going to be responsible for a major proportion of the actual 'tune' in pretty much any piece of music you care to imagine. So, if pushed, I think I'd be tempted to call the A23‑M's 210mm bass driver a 'bass/low-mid driver'. Said driver is a relatively conventional–looking unit sporting a polypropylene diaphragm terminated by a rubber surround mounted in a traditionally profiled die-cast chassis.

Having said that mid–range domes can be viewed as larger versions of dome tweeters, it's good to be able to report that this seems to be the case with the 25mm A23‑M tweeter. The tweeter diaphragm material appears to be the same on both drivers, and the relationship of surround and dome dimensions also looks similar. It seems to me that PSI have taken their tweeter expertise and scaled it up for their mid–range driver, and this is no bad thing because my previous experience of the A25‑M tweeter was very positive. Both the tweeter and mid–range drivers are loaded by a short conical waveguide. The waveguides will offer a degree of horn loading and consequent sensitivity increase in combination with some narrowing of dispersion.