Though Roland's Fantom workstation series hasn't been running as long as The Phantom (a popular American comic strip continuously in print since 1936), it still has, as electronic instruments go, quite a history. First released in 2001 as the 76-note Fantom FA76, the keyboard clung to its identity through a bewildering series of revamps and name changes, culminating in the top-of-the range Fantom G (which I reviewed in SOS January 2009). This was followed by the FA08, a more affordable, scaled-down descendant reviewed with typical incision by Gordon Reid in 2014. Since then, all has been quiet on the Fantom front (dramatic pause, drum roll)...

Until now (cymbal crash)! With little advance warning, Roland have unleashed a new flagship workstation-cum-synthesizer which builds on the Fantom's legacy with a brand-new design developed from the ground up for modern music production. Called simply the Fantom, it comes in three models: Fantom 6 (61 keys), Fantom 7 (76 keys) and the 88-key Fantom 8, henceforth referred to as F-6, F-7 and F-8. Given Roland's recent incursions into the world of modular and boutique synths, it comes as something of a surprise (though not an unpleasant one) to see them reviving this classic product line. But that's the thing with phantoms — they tend to come back and haunt you.

Constructed of tough metal, the new Fantom is designed to stand up to the rigours of life on the road — just as well, because I can see many gigging keyboard players wanting to get their hands on one. Roland take pride in the instruments' keyboards: the F-8 uses the PHA-50 'progressive hammer action' (which simulates the subtle 'escapement' bump and slightly heavier bass-note feel of a real grand piano), while the F-6 and F-7 use the new semi-weighted SK-14 action. All three feature a newly designed aftertouch sensor. These actions are optimised for low noise, so when you're practising Jordan Rudess licks at 3am, the sound of furiously rattling keys shouldn't annoy your neighbours, partner or cats.

I opted for the semi-weighted action and chose the F-6 model for this review. Prior to that I'd spent some time playing the F-8 at Roland's Artist Relations Centre in London. Sadly none of my relations were there, but I appreciated the pianistic feel of the 88-key instrument, and subsequently found the F-6 action to be perfectly agreeable — though I must admit, I do miss the cheerful rattle of the old G6 keys!

The internal sound engine is identical for all three instruments. If you want to expand the F-6's five-octave playing range, you can use front-panel buttons to raise or lower the playing register by up to three octaves, while the 'transpose' button allows you to shift the key range in semitones, up to five down and six up (a little confusing, I feel: 11 semitones each way would have been better).

I was glad to see the new Fantom has old-school separate pitch and modulation wheels, an improvement on the all-in-one sprung-lever joystick used on previous models. But surprisingly, the joystick is still there, occupying pride of place at the front left of the instrument. I was all set to moan about the wheels being set back eight inches from the front (a design feature that invariably gets the raspberry in keyboard reviews), but in light of the joystick's inclusion, it's probably the only way it would work — and anyway, I've got long arms.

Reflecting the age we live in, the instrument's seven-inch colour touch–screen offers smartphone-style scrolling on some of the longer menus. The back panel sports five USB sockets: two handle, respectively, data back-up and computer connection, the other three are for connecting external devices. This computer integration enables the Fantom to control popular DAWs such as Logic Pro X, and when connected to apps such as Logic MainStage, plug-in parameters can be displayed on its touch-screen. At present no software editor is available; Roland feel that's not a high priority given the complete, comprehensive user interface and high-resolution touch-screen.

Other innovations include colourful RGB pads, a fun 'motion pad' (reminiscent of Omnisphere 2's Orb and the Korg Wavestation Vector joystick), which mobilises the volume balance of four layered sounds, either manually or automatically. In addition to the regular filter (details below), there's an onboard analogue filter with its own dedicated audio outputs, handy if you want to run external signals through it. Applying the analogue filter to internal sounds involves a somewhat counter-intuitive effects-routing palaver, but once I'd figured it out I was rewarded by a sound that was subtly warmer, fatter and undeniably louder, with optional overdrive and a hint of amp simulator thrown in.

Features carried over from the G series include chord memory (which enables a large menu of preset chord shapes to be triggered with one finger), an arpeggiator and step LFO, which can be used to create beats and synth phrases.

While the new features are all useful, in my book the most important innovation in the new Fantom is its performance concept, which I feel will make life a lot easier for players. Gone are the unnecessarily proscriptive Studio/Live/Single modes of the Fantom G; in their place is an open, mode-free architecture with instant access to sounds, controls and features.

Editing is instant: if you want to adjust the filter on a synth, you can reach for the large, brightly illuminated cutoff knob and immediately start twirling, whereupon a back-lit interactive graph displaying filter cutoff and resonance settings in a combined curve appears on screen. Cease twirling for a second or so, and the graph disappears. No need to scrabble about with 'patch edit' and 'filter' buttons before making changes — you can perform real-time edits as you play, with no trace of sonic discontinuity.

Other quick-change panel parameters include illuminated rotary ADSR controls for amp, filter and pitch envelopes, each of which displays its own interactive graph when you make a change. For deeper, more deliberative sound editing, there are 'zoom' and 'pro' edit modes, the former being a selection of the latter's most commonly used settings.

To backtrack slightly, in 2009 Roland released an intriguing new digital piano. Part of the company's 'V' series (V-Drums, V-Guitar, etc), the V-Piano cost over five grand and weighed in at a back-breaking 38kg, so was never going to be the stage piano of choice for your average gigging musician. However, it had one distinct advantage over its competitors: rather than using samples, the piano sound was created by physical modelling.

Doing away with samples meant there were no awkward jumps in timbre between keyboard zones and dynamic layers — this thing sounded utterly smooth, and the overall piano timbre (modelled on classic grand pianos with additional innovative timbres) was attractive and convincing. My SOS colleague was impressed, and leading players added their plaudits. (Read Nick Magnus's review in the May 2009 issue.)

Fans of the V-Piano will be glad to know that the instrument has been revived and now lives on inside the new Fantom. Benefiting from new coding and improved sound quality, it sounds great — vibrant, bright and open, the most playable workstation piano I've come across. The piano is infinitely customisable, offering users control of lid open/shut position, hammer, damper and key-off noise, resonance settings for string, damper, key–off, cabinet and sound board, and duplex scaling (no, I didn't know what that was either).

You can also change the volume level, tonal character (harder, or more mellow) and tuning of each key. The latter will be welcomed by users who write music in non-Western tunings, and could also be used to create a realistic honky-tonk effect!

This durable, epoch-spanning keyboard workstation looks set to be a future classic.

In the new Fantom, the smallest indivisible unit of sound is called a wave, which could be an instrument multisample or a single drum hit. At the time of writing Roland haven't published a wave list, but I counted 2108, spanning the gamut of musical timbre from acoustic to electronic.

A single instrumental sound called a 'Tone' consists of four partials, each housing a wave of some description.

There are over 3500 tones, presented in containers called 'Zones'; a 'Scene' contains 16 zones, and you can specify different MIDI receive channels (though, apparently, not 'omni' mode) for each one. 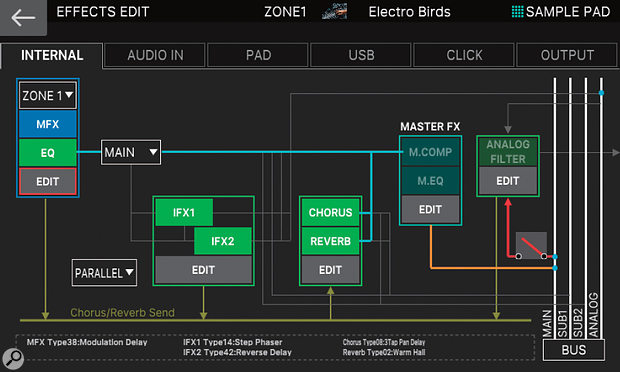 The Fantom's separate zone, scene and master effects makes for some quite complex effects routing!

Scenes, which store effects, EQ settings and sequence data for each zone, are the Fantom's default performing state. A Scene Chain function allows you to assemble live performance playlists, and/or group together your favourite scenes for quick access. Scenes are stored in four banks of 128, with 16 visible on screen at one time: the banks contain 272 factory presets, leaving 240 slots free for user scenes. There are also over 1800 empty slots where you can save your tone edits.

The Fantom incorporates three sound engines, called Zen-Core, Drum and the aforementioned V-Piano. The mysteriously named Zen-Core fuses a new synth sound engine (based on VA technology developed for the V-Synth) with Roland's long-standing PCM engine, and is used to produce the sound of a single instrument such as an organ or synth. As you'd expect, the prosaically named 'Drum' engine contains a collection of drum and percussion kits, with a different sound on each key.

At present the instrument's ROM size has not been disclosed, but I can tell you that, in practical terms, polyphony is unlimited — you can perform full-range piano glissandi with the sustain pedal down over an elaborate sequenced backing without any trace of voices dropping out or glitching.