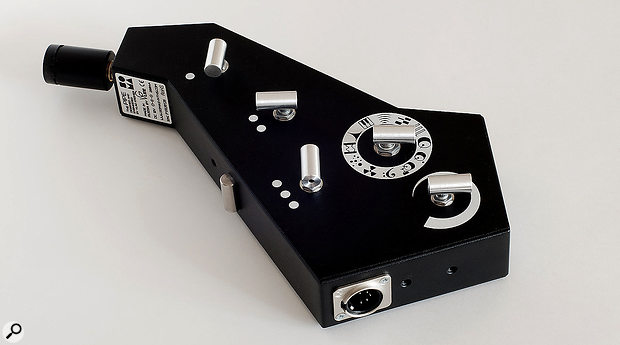 Once again, Soma bring us an instrument like no other...

Following the tradition of Soma Laboratory's Lyra‑8 synth, the Pipe was developed to give Soma's head honcho, Vlad Kreimer, a more satisfying way to perform with his — admittedly imperfect — voice. This personal drive is a key part of Soma instruments' character and may explain the attraction to musicians seeking a very particular level of expressiveness and individuality.

The Pipe is a combination of a specially developed vocal contact microphone and a dozen unique DSP algorithms. Set in chunky metal and available in either black or white, it's as solidly made as the Lyra‑8; the knobs feel great and the contacts aren't going to wear out like buttons, pressure pads or regular on/off controls. The Pipe is supplied with a breakout box, contact microphone, lead and power adapter — everything you need to begin tooting!

My kitchen scales inform me the Pipe weighs 866g, which doesn't sound like a whole lot until you've been holding it in one hand for a while. All the tweakable controls are down the right-hand side, so in order to access them while you play, this requires a left-handed grip.

I found the handling to be fairly awkward at first because of the need to take the weight by placing your thumb and ring finger beneath two metal cylinders; this leaves two fingers free for the circular contacts that are used to play the Pipe. Your little finger can either stick up in the air in the classic 'sipping tea' pose, or you might try resting it against the panel.

As I've spent many years pressing lightweight plastic keys and becoming extraordinarily puny, I quickly developed a two-handed grip, whereby my right hand provided extra support beneath the Pipe's illuminated grill. In that way I'm able to turn the dials easily enough and the overall effect looks a bit like playing a stunted electronic saxophone. Fortunately it doesn't sound like it. 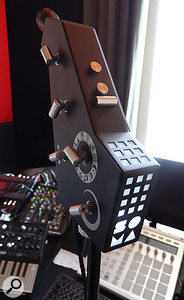 Screw holes on the bottom of the Pipe make it possible to mount on a mic stand — good news for those of us whose gym regime has slipped of late.The Pipe also has standard M4 screw holes, so it should be possible to add a stand or neck strap to free up your aching arms. I should reassure you that, after a few weeks, even an ageing hippy who exists on a diet of hemp products and muesli was able to hold the Pipe single-handedly for up to 20 minutes at a stretch without fainting.

Soma have adopted the same contact method as their two Lyra synths, so in order to hear any sound, you must make a circuit with the cylindrical finger rests and the round touch sensors. You can wiggle your finger pretty fast on this sensor to stutter your vocal input and when you put the Pipe down, there's no fear of unpleasant feedback or other noises. This is important for the live performer who wishes to grab the Pipe spontaneously. Four rubber feet are fitted to make the process even friendlier. The second contact, which I'll refer to henceforth as simply 'the sensor', triggers a specific behaviour in each of the available algorithms.

At the Pipe's heart is a programmable chip that is widely used as a source of reverb but which, here, is loaded with Soma's own processing functionality. Twelve unique algorithms are present, indicated graphically around a 12-way selector. In clockwise order, they are: Orpheus, Filterra, Synth, Reverb, Madelay, Pulse, Bassdrum (three versions), Octava, Generator and Harcho.

As you turn the dial, the three performance controls and sensor assume roles that best suit the selection. The fourth control, volume, is constant in all modes, although some of the algorithms are louder than the others and you soon learn to back off the volume when exploring the 'dangerous arc' of the selector's orbit.

Flip the Pipe over to reveal the functionalities of the sensor and three controls listed neatly for every algorithm, which is hugely helpful when you're getting started.

First you must connect the Pipe to its breakout box using the special cable provided. Although it looks like a regular XLR cable, this one carries the left and right audio signals plus power, so it's best to label it clearly to avoid possible mistakes later. An external power adapter is also supplied, plus a single contact microphone. Others — with different frequency responses — are available separately. You can also, if you wish, connect other instruments to the microphone input jack and process them instead.

Audio leads of up to 25 metres may be used and if you connect just a single cable the outputs are merged into mono. Since the manual urges you to enjoy the expansive stereo output, that's mostly what I did.

Actually, the manual is worth a read before you begin tooting, humming and singing. That's because there's a very definite Pipe technique that you should at least be aware of before you can expect to sound cool. The manual advises you to start with one of the simpler algorithms, reverb, which is denoted graphically by a series of waves spreading out from a central point. Reverb is one of only two algorithms with an option for passing your voice through unprocessed; therefore it's a great way to try out the many techniques you'll be working on. Of course there's no reason why you can't simply hum, sing, breathe in and out, flick your tongue, make weird mouth shapes, speak, groan and generally find your own sweet spots.

It's been many years since I sang regularly but, once upon a time, I was an innocent, high-pitched choirboy. When my voice broke it left me still able to sing in tune but with a bland and, frankly, characterless tone. These days I confine my singing to the shower, so doing it in the studio reminded me of many things nerdy synth players rarely consider, such as breathing, posture, movement and generally having a body.

You soon realise that the Pipe is a very responsive and direct instrument but that it requires discipline from your mouth and lungs. So while you can get interesting results right away, there's a constant demand to work on your technique to get the most from each algorithm.