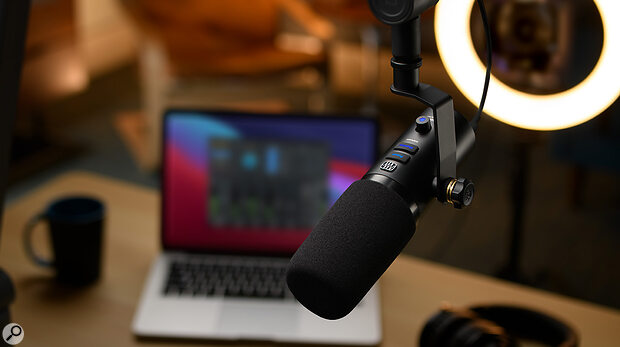 PreSonus’ new desktop mic gives you a broadcast‑ready sound out of the box.

USB mics are now common, but PreSonus brought something new to the table with their original Revelator multi‑pattern USB capacitor microphone, by giving it onboard processing. Now they’ve released a cardioid‑only dynamic equivalent called, reasonably enough, the Revelator Dynamic.

Based on the same capsule as PreSonus’ PD‑70 XLR mic, the Revelator Dynamic comes with a windshield, a folding tripod desktop stand and a USB cable. Its dynamic capsule is optimised for close working, making it well‑suited to podcasting or vocal recording, but it can also tolerate high SPLs so instrument recording is not out of the question. It also has a built‑in headphone amp.

Physically, the mic (which is an end‑address design) looks very much the part for voiceover and broadcast work. The body fixes, via a swivel mount, to a standard mic stand or the included tripod, and all the power for the mic is provided through a mini‑USB port on the underside of the mic, alongside which is a 3.5mm TRS headphone jack. Included with the mic is a licence for PreSonus’ Studio One Artist DAW, and the PreSonus Magic Bundle of plug‑ins and sounds.

On the front of the mic body are buttons named Preset and Monitor. The latter, when pressed, lights up blue and enables the headphone volume to be adjusted using the Volume knob. Pushing the Volume knob mutes the mic, while pushing and holding the Monitor button turns the LEDs from blue to green, indicating that the Volume control is now affecting the mic gain. Normal operation is resumed automatically once you’ve made an adjustment.

The Revelator Dynamic has the ability to store and recall customisable presets, with processing on offer including a high‑pass filter, gate, compressor, EQ, limiter and voice modifier. It also has two ‘virtual’ inputs, which make it possible to mix your voice with audio from other applications using an integral loopback function. All this is controlled from the PreSonus Universal Control software, which recognises which PreSonus products you have connected and then provides a control panel for whichever one you select. Here you’ll find a mixer for adjusting the mic level in the mix along with the DAW playback level, the two virtual input levels and the amount of reverb that is added to the mic signal. The blend of input signal in the monitor mix can also be controlled from here, as can the master level.

The Revelator Dynamic can store four presets internally, which is useful when you’re working with a mobile device that can’t run Universal Control. In addition, four factory presets and a further eight user preset slots are accessible when running Universal Control. Pressing the Preset button on the mic scrolls through the four internal presets: the LED backlight changes colour to match the colour used in the editor. If you press and hold the Preset button, the preset is bypassed, leaving only any reverb you may have added. Press again and the preset is back. 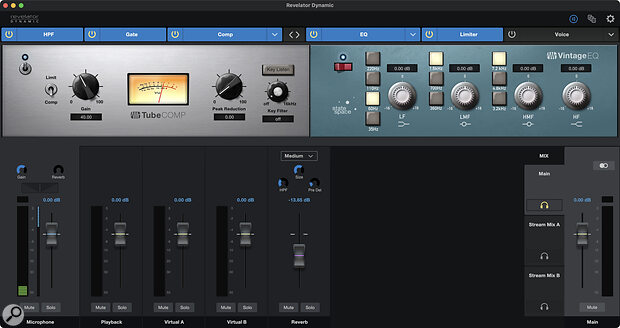 The Universal Control app lets you access the Revelator Dynamic’s onboard processing.

The Universal Control app also features a Hot Key, which is essentially a preset slot that you can bring in and out of play very quickly: I’m sure the more creative user will find this very handy for throwing a quick special effect onto their voice.

Rather than overwhelm the novice user with controls, the six processing stages may be viewed simply as choices of presets. Stages can be turned off when not needed, and the entire processing chain can also be bypassed. For those wanting a deeper level of control, there’s a more advanced view showing all the key controls for the individual processing stages, along with graphs with draggable points, plus the ability to change the order of the stages. The manual also includes many examples of how to set up the Revelator Dynamic for common tasks such as Google Meet for Chromebook, Zoom, live streaming and so on.

The Revelator Dynamic delivers a robust vocal sound that’s well‑suited to podcasting but may also be tweaked using the channel strip controls to suit various vocalists.

The Revelator Dynamic delivers a robust vocal sound that’s well‑suited to podcasting but may also be tweaked using the channel strip controls to suit various vocalists. The electronics add a little background noise, and while that isn’t usually an issue when working up close, it can sneak up on you if you apply compression or work a little further from the mic; the built‑in gate can really help here. I found the Universal Control software very user‑friendly, and while I don’t have much use for the faux vocoder or robot voices included in the voice processor section myself, I’m sure somebody will love them. The more usual vocal treatments are more than capable of tweaking the vocal tone to your liking, and being able to add reverb hasn’t been so much fun since those plastic toy mics with the spring reverb built in.

The bundled software is icing on a cake already high in calories, and given its price, it would be difficult to describe the Revelator Dynamic as anything other than a bargain.

An affordable USB microphone that sounds great and packs plenty of processing options for a variety of podcasting and music‑recording situations.