Billed as a 'fractal sequencer', Qu-Bit's Bloom is a two-channel step sequencer with a difference. Its unique selling point is its generation of variations on a base pattern — a concept illustrated in the manual using a tree trunk and branches. Since the variations are always built from the preceding sequence, more branches equate to greater deviations from the origin. 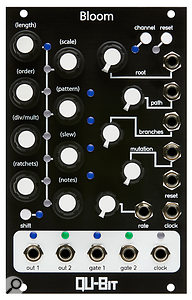 Qu-Bit Bloom. Size: 16HP. Current: +12V 82mA, -12V 0mA.Colour plays a significant role, with RGB LEDs employed imaginatively throughout. The two sequencer channels are lit in blue and green but each has a spectrum of colours for the branches that may sprout. The result can be a mesmerising light show, particularly when channels have their own length, speed and direction.

Fortunately, you don't need to grasp the conceptual angle to get started. I'd advise connecting the CV and Gates to a couple of regular synth voices and plunging right in. (At this point you'll probably notice there's no start/stop button.) The channel button toggles selection of either the blue or green channel, but if held for a few seconds it will turn white, indicating both can be edited simultaneously.

Turning encoders to set the pitch, you make a pattern like any typical step sequencer, pressing encoders to toggle gate status. This base pattern is influenced by five knobs on the right–hand side, the first of which — 'root' — sets the root note within the current scale. The next most important is probably 'mutation'. When this is set to zero, the notes you hear played back are those you just dialled in, but set it anywhere above zero and the tree trunk is regenerated.

The process may involve transposition (by as much as an octave either way) or inversion, where the highest note becomes the lowest. Alternatively, the pattern's order may be reversed and if your original sequence contained gaps, gaps will surely find their way into the new material. In practice, it's a fast and hugely enjoyable technique of spawning sequences — and if you hear something cool, turning mutation back to zero will keep it as the new trunk.

The 'branches' knob determines the number of branches (one to seven) and therefore the complexity of the imagined arboreal structure. At its lowest position, only the trunk pattern plays and the central LEDs remain in the channel's colour to remind you of this. As you add branches, more colours are brought into play — and impressively, each channel has its own palette. Tweak a note in the base pattern and you'll hear the changes echo all the way upwards. Finally, the 'path' knob determines the route to be taken at each branch point. When fully extended, you can grow a simple 32 step base pattern as far as 256 steps.

All the right-hand controls sport CV inputs, enabling you to use an external source to transpose patterns, vary the complexity and choose paths heading upwards through the branches. CV control is focused on the selected channel, so you can make dynamic changes to one pattern whilst the other remains constant. The reset button (also with CV input) restarts playback as necessary, for example to line up with other sequencers or drum machines.

Unlike some modules fitted with tempo knobs, this one's might just prove valuable. Even before you employ the multipliers and dividers, Bloom's internal clock has a wide operating range (5s to 10ms). Interestingly, when the 'rate' control is turned fully anti-clockwise, any external clock present will smoothly take over. So you can play around freely with playback speed, switching effortlessly to synchronised behaviour when required. If you set rate to its zero position without connecting a clock source, playback stops.

Bloom is a natural choice for performance interaction but is equally suitable as a source of 'hands free' evolving variations. It's bloomin' marvellous!

A deeper level of programming sees the shift key combine with encoders for the purpose of modifying length, scale, direction, clock division, ratcheting and slew. Some of these operations can be applied on a per-step basis, which necessitates entering the slew, ratchet or note editors. Here the interface becomes slightly more obtuse, with shift and click operations brought into play, plus other buttons being repurposed for page navigation and page looping. On a couple of occasions, I somehow rendered the module non-responsive, so the UI may not be idiot-proof yet.

The base pattern may be from one to 32 steps, with four LEDs allocated to show how many pages are in use. Eight scales are available to impose varying degrees of order on your sequences, although the selection isn't particularly adventurous. Right now, we're talking major, minor, whole tone and a couple of pentatonic variants, plus unquantised. However, Qu-Bit are considering how to implement more exotic or custom scales in a future update, which I think will make a big difference. I mostly stuck with minor, although once or twice I swear there was a bum note generated in some distant tree branch.

Bloom offers a mere four playback directions — forward, reverse, pendulum and random — which is a pity given the UI is geared towards options in batches of eight. At least you can store and retrieve patterns — your eight favourite starting points. Lastly, there's a copy process geared towards copying and pasting irrespective of the currently-selected pattern.

Delving into the note editor, it's possible to view a representation of the voltage for each step and set individual gate lengths — or ties. The encoders, being subtly notched, are well-suited for manual pitch changes during performance. Perhaps the biggest puzzle is 'ratcheting'; Qu-Bit didn't choose the classic implementation, in which a number of notes are crammed into a step or steps. Instead, Bloom will repeat the step at the current clock rate, thus extending the pattern. While this is fine for building odd-length sequences, I'm glad Qu-Bit are considering ways to add traditional ratcheting too. In the meantime, you can fake it by taking the gate out of one channel and applying it to the notes of the other. Setting the gate channel to a faster clock division, making it mostly gaps with chosen bursts of activity, will deliver the expected effect. Doing it this way has the advantage that you can move the ratcheting around, if the gate track is a different length to the note track.

Bloom is so rewarding as a generative sequencer that I've failed to point out any other applications, but a couple are worth noting. Firstly, it can serve as twin LFOs, with each stage either a smooth or stepped transition depending on slew amount. And since either channel can run at speeds ranging from 1/8th to 8x, it can be a friendly clock divider or multiplier. For ease of use, I'd recommend learning the various key combinations — one favourite is shift and reset, which quickly takes you back to the pattern's last manual edit stage.

In some ways, I was reminded of Mutable Instruments' Marbles, except that Bloom's variations can be sourced from a known starting point. It might take a few sessions to fully grasp the concepts and imagery, but the user interface and intelligent use of colour really helps. Bloom is a natural choice for performance interaction but is equally suitable as a source of 'hands free' evolving variations. It's bloomin' marvellous!