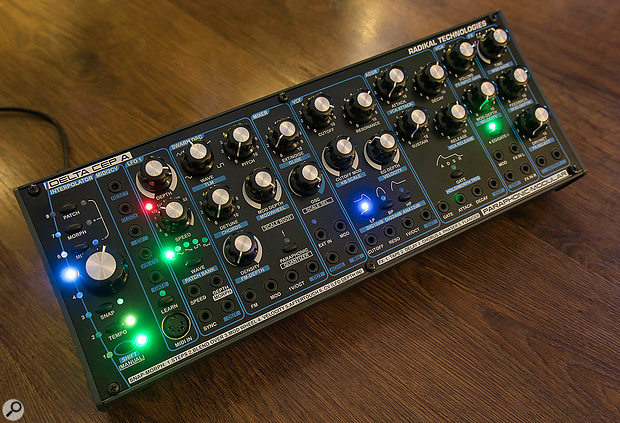 The Radikal Technologies Delta CEP A is a desktop and Eurorack synth with a killer feature...

The snappily titled Delta CEP A is a semi-modular, digital synthesizer from Radikal Technologies, a German company who, in 20 years, have released two other synthesizers and a handful of Eurorack modules. A rare treat, then.

The Delta CEP A is one of a growing number of synthesizers designed to work in both Eurorack and desktop format. We're reviewing the desktop unit, which is largely the same as the Eurorack version (more on this in a moment). It's semi-modular, so you can use it on its own or as part of a bigger modular system, and it has some unique features up its sleeve, including a paraphonic mode and something called snapshot morphing. More on that later.

The stand-alone version comes with a solid metal enclosure which has a 12V DC power connector, on/off switch, MIDI In/Out/Thru and stereo audio inputs and outputs. The synth measures 352 x 135 x 97 mm (the Eurorack version is 68HP) and is reassuringly weighty at just over 2.5kg. The front is sloped so the busy synth panel is perfectly visible if you're sat in front of it. Knobs are panel-mounted and extremely sturdy, and the black, blue and white colour scheme gives it a professional look. In all, the build quality feels excellent.

Whilst the synth itself functions identically in both Eurorack and desktop versions, the latter has some additional ports at the rear. The Eurorack version has a single MIDI input port in the MIDI-to-CV converter section. The Desktop version also has MIDI In, Out and Thru round the back. The input is the same as the front panel input and the output allows MIDI clock to be sent from the internal clock. There are twin quarter-inch TS jack sockets for stereo audio input and output, which are duplicates of the 3.5mm effects input and output sockets on the front panel.

One feature, which is enabled by default, causes the synth to switch itself off after 30 minutes (only on the Desktop version). This caused me to lose an unsaved preset a couple of times before I realised the function could be disabled. Apparently this is due to a new EU regulation which states that all electrical products must have a power-down mode with a maximum power consumption of 0.5 Watts. So you may be seeing this on a lot more synths in future.

The front panel is divided into various logical sections and each comes with a fistful of Eurorack-style audio and CV connectors. The synth is based around one of Radikal Technologies' Eurorack oscillators, the RT-311 Swarm Oscillator (reviewed by Paul Nagle back in November 2017). It is a flexible eight-voice oscillator which can spread its voices around in a variety of ways. If you have the Delta CEP A Eurorack version, you can add an RT-311 Swarm Oscillator module and connect them via a 10-pin ribbon cable. The Swarm Oscillator will synchronise to the Delta CEP A and give you extra voices and features.

To complement the Swarm Oscillator there's a multi-mode filter which can be switched between analogue and digital, an LFO, mixer, ADSR envelope, VCA and an effects section. To top it off, there's a MIDI-to-CV convertor, and an intriguing section called the Interpolator. Many controls are dual-purpose. They often have two labels in different colours. At the bottom of the Interpolator section, we find a Shift button, which can be used in conjunction with these controls to access their secondary function.

The Interpolator is worth explaining in a little more detail before we move on. For many functions, two rows of eight LEDs are used as an option picker, or as graphs to show the value of something. For example, there are five effect types available in the Effects section. When you turn the Fx-Select control, the LEDs in the Interpolator section light up 1-5 to show you which effect you have selected (the actual effects are thoughtfully screen printed on the case so you don't have to remember which is which). The Interpolator section is also used for preferences such as MIDI channel selection and for preset and snapshot selection, which we'll come to later.

As with most semi-modular synths, the various sections are pre-patched in a logical way, so you don't need any patch cables to get started. Switching on the unit results in a short but eye-bleedingly bright LED light show. LED brightness can be adjusted, but even the lowest setting was too bright for me, especially in a dark studio.

The Swarm oscillator can create simple analogue-style waveforms: sine, triangle, sawtooth and square. A variable control sweeps through the waveforms in that order. Each waveform has a pulse-width–style wave-shaping function called TLM. Waveform or TLM can be modulated via the LFO, or from the Mod input jack. The Density and Detune controls add up to eight unison voices for those thick swirling dance sounds. Linear FM modulation is possible from the corresponding 3.5mm jack input.

Paraphonic mode, which is only available via MIDI, allows the oscillator to play up to four notes at once. Because the Swarm oscillator can actually play eight voices at once, the four-note paraphonic mode uses two voices per note, so you can still detune each voice for a thicker sound. This is great, but I think they missed a trick not including an eight-voice paraphonic option.

In addition to the unison and paraphonic modes, you can also use the eight voices to create chords. Here, the Detune knob becomes a chord selector, with Major chords to the right and Minor chords to the left. The Density knob alters the number of notes used in the chord. This quickly became one of my favourite features for creating enormous-sounding rave and Detroit techno chord stabs.

A 1V/Oct input allows the oscillator to be tuned and played by CV instead of MIDI. In this case, a built-in scale quantiser can be used to keep your CV locked into one of 14 different major or minor scales.

The filter section offers a choice of analogue and digital filter types. There is a 12dB multi-mode filter, in both analogue and digital varieties, which can do low-, band- or high-pass. A nice touch here is that you can enable the multiple filter functions at once. So mixing both low- and high-pass will result in a band-stop filter. Both analogue and digital filters are functionally the same, but offer different flavours. If I close my eyes, I don’t think I can tell which is analogue and which is digital, so which one you choose is purely down to taste. As if that weren’t enough, there’s a third option, a digital 24dB Moog style low-pass. The digital filters will self-resonate with no input, and the analogue filters can be coaxed to do the same with just a little noise.

The filter frequency and resonance can both be modulated from CV inputs. There's also a 1V/Oct input for chromatic playback of the filter frequency. Envelope depth and velocity amount are adjustable directly and if you're playing the synth via MIDI, there's a variable keyboard scale option. Finally there's a modular output, for sending the filter output elsewhere. Patching this into the mixer's external input socket and raising the external level results in some lovely feedback.

Snapshot morphing is, in my mind, the biggest reason to own this synth. It is probably one of my favourite features of any synth released in the last 20 years.

A good synth gets nowhere without modulation. On offer here is a single LFO and an ADSR envelope. The LFO can produce five waveforms. There are dedicated controls for speed and depth, which will go positive or negative. Speed can be sync'ed to clock tempo which comes from either MIDI, analogue or internal clock, and clock divisions range from 1/32 to 8. Input jacks are available for speed, clock and depth.

A single output allows the LFO to be patched elsewhere, but bear in mind that the LFO is connected internally to oscillator waveform, TLM and pitch (via modulation wheel). Overall the LFO is a very useful addition, but I did miss a way to reset the phase.

The Delta CEP A's rear panel hosts quarter-inch audio outputs and effects inputs, along with MIDI In, Out and Thru on five-pin DIN ports.

The envelope works much as you'd expect. The envelope is hard wired to filter cutoff and amplitude, however in time-honoured tradition you can disconnect the envelope from the VCA and use a gate signal instead, much like many early analogue monosynths. Radikal Technologies put a new twist on this by allowing you to adjust the attack and release of the gate signal, turning it into an ASR envelope — two envelopes for the price of one. The ADSR can of course be patched elsewhere using the output jack, and attack and decay times can be automated using CV inputs. Finally, there's a 'freeze' function which will hold the envelope at its sustain level indefinitely. This can be useful for creating drones, or simply for sound designing without continually having to trigger the envelope.

A digital stereo effects section can be used for both internal and external signals. You can choose between a tape delay emulation, tempo-sync'ed digital delay, chorus, phaser and flanger. Only one effect can be active at any time. Each effect has up to four parameters which can be tweaked using two knobs and the shift control. The effects are of reasonable quality, nothing earth-shattering, but convenient to have nonetheless. It is a shame there are no modulation inputs on the effects section as I think that would have opened up the possibilities. Having said that, it is possible to program effects changes using the Snapshots system, which, uncoincidentally, we will take a look at now...