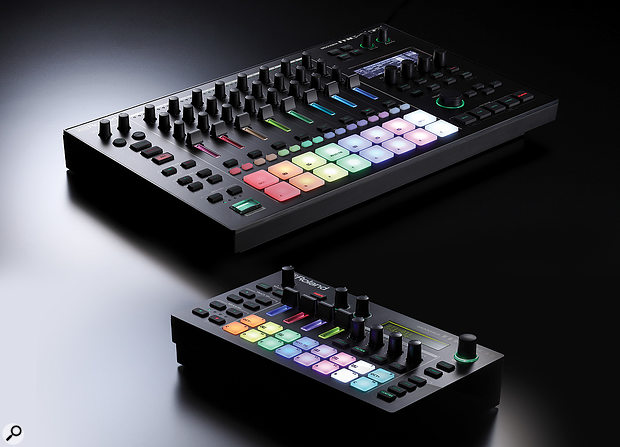 Roland can comfortably claim to have invented the groovebox. The idea germinated with the MC‑202, with its combination of synth, internal sequencer and portability. The earlier Micro Composers — the MC‑4 and MC‑8 — were pure sequencers, notable for being the first to be digitally controlled, and for being disguised as supermarket tills.

It was the MC‑303 that first bore the title groovebox and added the final ingredients: drums and effects. More MCs followed that shared arbitrary model numbering with classic TR devices. Now, after a decade out of the groovebox business, Roland are back with two new "self-contained production platforms", the 101 and 707. Both are built around the same engine, but presented in two form factors: one ultra portable and battery powered, the other taking its design from Aira products like the TR‑8S and MX‑1.

There are trace resemblances to the earlier MCs, but in terms of functionality and workflow Roland appear to have embraced contemporary concepts. The 101 and 707 combine ideas from their Aira range with others found in Live, Maschine, MPC, Circuit and the Elektron devices.

These new MCs pack in a lot of functionality, so let's start with an overview, and consider the scope of their ambitions. These are multi-channel workstations, with tracks that can be assigned as drum kits, synths or audio clip players/recorders. There's a generous helping of insert effects, send effects, and an epic instance of the Aira Scatter performance effect suite.

Projects mimic Ableton's Session View structure, but are limited to 16 clips per track. Eight Scenes recall different combinations of clips, more like how Maschine's Ideas mode works. If you prefer the Live workflow of launching clip rows, you can do that too! Taking a leaf from the MPC book, you have the option for different clips/scenes to have totally separate settings, kits or synth sounds, squeezing a lot more range out of the available tracks.

The MC's audio tracks ('Loopers') also work like tracks in Ableton's Session view, capturing audio of a pre-defined number of bars into 16 available slots. Live recording has a maximum length of eight bars, so these MCs are not going to replace the linear recording or multitrack playback of a traditional recorder or DAW.

Likewise, neither device has pretensions toward linear song arrangement or performance capture. I'd at least hoped I could bounce a mix to one track but there's the eight–bar record limit. Like the rest of the Aira range, the MCs are focused for real-time performance, with faders and numerous quick ways to add fills and transition effects. For song capture you get audio-over-USB, enabling you to print the individual tracks to your DAW as you perform.

Like the TR‑8S, the MC‑707's panel is laid out like a mixer, with a chunky fader and three knobs for each of the eight tracks. A display on the right defaults to showing the clip grid with all your drum patterns, note sequences and audio clips stacked under their parent tracks. 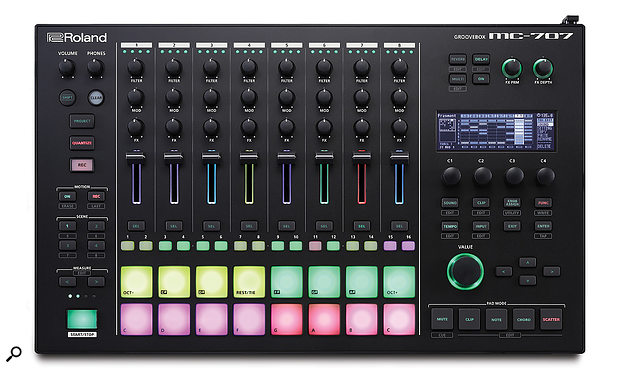 The bottom two rows of pads can be used as drum triggers, virtual keys for playing synths, clip launchers, track mutes or triggers for the project's Scatter effects. The 707 also has a 16-button row above the pads, primarily used for step-sequence triggers. These are small rubber buttons rather than the usual Aira step keys.

The 707 gets a data dial and cursor keys that can be used for navigating the clip grid and other on-screen interfaces. Four clickable encoders under the display are used for interacting with control pages. This is mostly effective although it takes a while to get used to several different navigation styles.

The 101's panel is packed with controls, but is heavily pruned in comparison to its sibling. There are four tracks instead of eight. All tracks share four knobs, which either present a single parameter at a time from all the tracks, or focus on a single track. When focused you get one extra track control compared to the 707.

Several functions become shift options on the 101, and step triggering and scene launching are sub-modes of the main pads, which can slow you down. The 101 has a simple one-line text display, so the visual clip grid does not exist. The main consequence, however, is that choosing settings, browsing and making all but the most high–level parameter adjustments requires a line-by-line menu process performed with the clickable encoder.

The payoff, though, is that the 101 is tiny; even smaller in surface area than Novation's Circuit (although a good bit thicker). It can run from four AA batteries, or standard...

Top 10 Boring Things That Are Really Important In The Studio
5 days 1 hour ago.