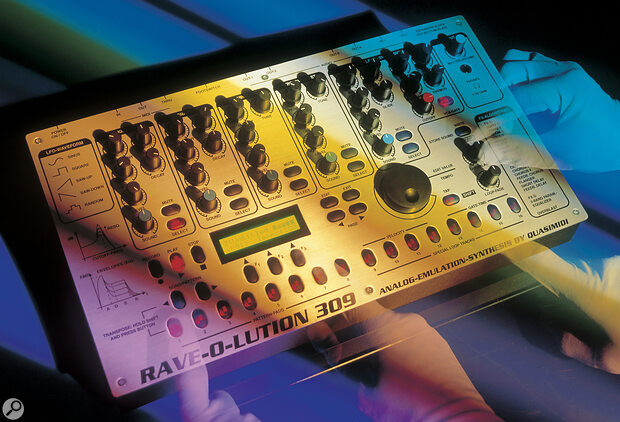 Quasimidi are delivering on their promise to provide new goodies for owners of the 309 dance box. Derek Johnson raves a bit...

The promise of upgradability was one of many attractive features of Quasimidi's 309 all‑in‑one techno box. Read about some of the others in our review in May of this year: faithful reproduction of analogue drum and synth sounds, intuitive retro‑style, pattern‑based sequencer, and plentiful real‑time controls. Upgrades were imminent, but details were sketchy: we only knew there would be some kind of sound expansion and that extra audio sockets would fill blanked holes. Just in time for Christmas, the upgrades have arrived. Are they essential purchases for the existing 309 owner?

Whether you buy one or all three expansion options, your 309's operating system needs to be upgraded to v2.0 (see 'v2.0 Software' box). Luckily, this upgrade is provided as a matter of course, and is easily installed by simply removing a plate from the 309's bottom and swapping the old chip for the new one. Full, clear instructions are given, as is the necessary chip‑removal tool.

On either side of the main operating system chip there's a socket where the synth and drum/percussion expansion options are installed. Essentially, the synth expansion adds 37 new oscillator models, offering up to four oscillators each, two new filter algorithms (12dB low‑pass and 12dB high‑pass), plus sequence‑sync'able LFOs. You can now assign 16th, 8th, quarter and whole note values, that follow the 309's tempo, to the LFO. The new waveforms can be auditioned in 32 example sounds, but these memory locations are not accessible under normal circumstances. There are still 128 synth patch memory locations.

The synth expansion offers one — or is that two? — especially important new feature if the audio expansion option is also installed: two extra bass/lead synths. These synths can be played on their own MIDI channels, from an external keyboard or sequencer, or set up to double the main bass/lead synth. It's also possible to trigger the extra synths from the 309's drum sections. Let's be clear, though: you do not get two extra sequence tracks, just two extra synth voices.

Each synth has all the programmability the 309 has to offer, and tweaks can be made from the front panel, and sent over MIDI or recorded into the dedicated Master track). Press and hold F1 or F2 (under the display), and you can use the bass/lead synth's controls. For more detailed editing, double‑pressing F1 or F2 takes you to the main editing pages, visible on the display.

The drums and perussion option is equally impressive, adding extra kick (14), snare (11), hi‑hat (8) and percussion (127) waveform models and samples. There are also now 20 instead of 10 percussion kits. Amongst the percussion instruments is a selection of synth waveforms, that can, given the correctly programmed kit, be played melodically, albeit with a maximum range of 12 notes. A variety of hits, chords, yells and so on fill out the collection of synth‑based percussion. All drum and percussion sounds have most of the 309's synth parameters, including the new enhanced LFO — just the thing for wild, tempo‑driven modulated drum parts. This expansion also doubles the number of memory locations (to 128) for each of the drum and percussion sections, and adds 38 new preset Patterns.

Now to the audio expansion, possibly the most exciting option of the lot. This board is a little trickier to install, but the instructions are once again very clear. Basically, the expansion offers a pair of audio inputs and an extra pair of (assignable) outputs. Any line‑level audio appearing at the inputs can be treated — singly or as a stereo pair — with the full complement of 309 synthesis technology. And remember, that includes a wicked, newly enhanced filter and sync'able LFOs. You can also trigger the inputs from any of the drum machine/sequencer sections, for instant gated effects. The flexibility is quite staggering, and this option takes some beating for the creative mangling of sound. Take your pick: a tape deck, CD player, turntable (given a suitable preamp), audio output of a digital synth or sampler, or the audio from a larger analogue system are all grist for the Quasimidi mill. I had an enjoyable time deconstructing Radio 1 with the 309: using the tap tempo and sync'd LFOs modulating the filter, virtually anything — the waffling jocks or the music they were playing between the waffle — came across as a mangled yet coherent and synchronised part of whatever Pattern I was working with. Highly recommended.

Outputs 3 and 4 can be used to send any 309 sounds (or the treated audio ins) to a mixer for external processing; of course, on‑board effects are not available in this case.

Knobs and editing parameters are accessed in exactly the same way as the synth expansion; in fact, when you double‑press F1 or F2 to get to the editing pages, there are options for choosing the audio input or synth waveforms, so you could have one audio input and one extra MIDI‑controlled synth, if you liked. The only difference is that if you want to work on a stereo input, you double‑press F3; pressing and holding F3 lets you use the synth section's real‑time controls on a stereo signal.

To go back to my initial question: are these options essential purchases? With no reference to financial considerations, the answer is "Yes", emphatically. In the real world, of course, we're talking about £347 for all three options, which is more than 50% of the 309's £649 retail price. Add all the options, and the Rave‑O‑Lution will have cost you just under £1000. As a first choice, I'd recommend the audio expansion, although with this installed, the synth expansion really is worthwhile: between them, they offer two extra synths and as much external signal processing as you could reasonably want, which isn't at all bad for the money.

And once you've passed those hurdles, another £99 for all those extra drum sounds — not to mention extra drum memories — begins to look reasonable. As a committed 309 user, you'll probably start budgeting for these options. They give what is already a cutting‑edge musical tool that much more bite.

The new software adds one or two nice touches to the 309's operating system. Initially, the 309 couldn't follow Song Position Pointers when sync'd to an external device; v2.0 changes that, and SPPs are now happily recognised. Track mode is switchable to internal and external; before, it was one or the other, so the 309's sequencer couldn't control an internal sound at the same time as playing an external instrument over MIDI. Many users also wanted to be able to copy Motifs — the building blocks of Patterns. This is now possible, and you can even copy Motifs from one section to another (Kick to Hi‑Hat, for example).

The most significant enhancement has to be the implementation of real‑time loop recording when editing Patterns. Not only do Patterns loop while you add or delete note events, but you can actually switch sounds while you're doing it, using the Select buttons. A little jitter occurs when you change sounds, but nothing too distracting. This is a highly immediate way to create patterns, very reminiscent of the TR909 or TR808.

The excellent just got better. These options are highly recommended for any serious 309 user and will significantly expand the power and usability of this machine.