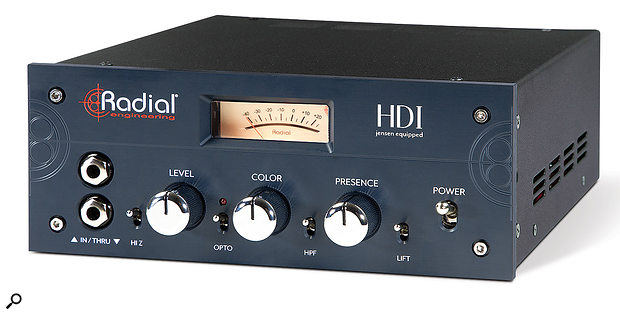 This studio DI box goes further than most, adding character to a range of sources.

The sound from a DI or instrument input — whether a stand-alone one, or one built into a mic preamp or audio interface — typically requires some additional sound processing, such as amp modelling. While that's now very easily achieved in the DAW, the problem remains of how to add that kind of appealing tonal colour without also introducing performance-wrecking latency to the monitoring, or when performing live. The simplest solution is to achieve the desired colour at source, rather than in the computer. And if miking an amp is impractical, a convenient alternative might be a DI box that can introduce the desired musical colour. That's precisely what Radial offer in their new HDI — which they describe as a 'High-Definition Studio Direct Box' and say provides the functionality of a DI box and the musicality of a guitar amplifier.

Despite its name, the HDI certainly isn't only a DI box for studio use; it could equally well be used on stage instead of a backline amp. The HDI ships as a stand–alone desktop processor, but can also be rackmounted (occupying a 2U space) singly or in pairs, using rack ears and a joiner-plate. These are generously supplied with each unit, rather than as expensive accessories — a nice touch. There's also a three-year warranty.

It's important to appreciate that the HDI's structure is based on splitting the input signal into two. One is an ultra-clean and accurate direct path and the other a controllably distorted one. The outputs from these two signal paths can be combined for the desired amount and character of coloration at the final output.

An engineer at heart, I tend to examine new products from the rear panel first, and the HDI's is very simple. A universal (100-240 V AC) IEC mains inlet with integral fuse holder is joined by three outputs. The first is a transformer-balanced line-level output on an XLR, and the second a mic-level output — effectively a built-in DI in a line-level DI box — which is derived from the line output via a standard Jensen JT‑DB‑EPC transformer. The line output employs a custom version of the JT‑11‑DM transformer, modified to include an extra 'bias' winding (more on that below). There's also an unbalanced instrument-level output on a quarter-inch TS socket. This is labelled 'Processed Output', simply to differentiate it from the front panel 'Thru' output (which, obviously, is not processed). The processed output could be sent, for example, to an on-stage monitor. 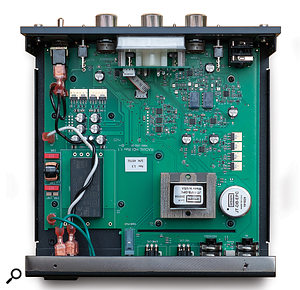 The obligatory shot of the inner workings — it's all very high quality.The HDI's nominal line output level operates at a standard +4dBu, with...