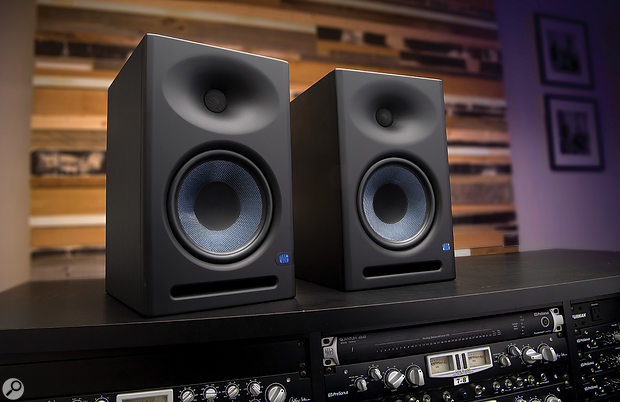 Both models feature extensive tuning controls, including input trim, a high-pass filter for use with subwoofers, both mid-range and HF adjustment, and a three-way switch for selecting between half-space, quarter-space or free-standing operation.

PreSonus' popular Eris range has been given an XT upgrade. We put them to the test!

Following the success of their existing Eris range of affordable studio monitors, PreSonus launched an updated Eris XT series, which includes the Eris E8 XT (pictured) and, more recently, the E7 XT, both of which we received for review a few weeks apart. Outwardly these are fairly conventional two-way ported active monitors, the Eris E8 XT kitted out with an 8-inch, woven composite woofer and a 1.25–inch soft-dome tweeter incorporating a silk diaphragm. Measuring 247.65 x 292.1 x 406.4 mm, it weighs a reassuringly hefty 10.43kg, and the speaker is priced individually so that users can choose individual speakers to create stereo or surround systems. The slightly smaller Eris E7 XT cabinet measures 240 x 242 x 365 mm and weighs 8.4kg.

Both models employ similar construction, and the tweeter and power-amp ratings are the same for both, so the bass/mid driver and cabinet size are the only outward differences. A black vinyl foil finish gives the speakers a tidy and purposeful feel, while the slightly rounded cabinet edges add to the overall unfussy look. A PreSonus logo lights up as the speakers are powered on.

For these monitors, the designers have employed a slotted front-facing port below the woofer to avoid problems when placing the speaker close to a wall. The MDF cabinet is internally braced, and the tweeter sits in an elliptical waveguide dish formed into the front baffle. We're told that this EBM (Elliptical Boundary Modelled) waveguide was designed by Hugh Sarvis of WorxAudio to produce a 100–degree (horizontal) by 60–degree (vertical) dispersion, the practical outcome of which is that these monitors have a usefully wide sweet spot with less energy aimed at the desk's surface.

Both models incorporate a 75 Watt amplifier for the LF and a 65 Watt amplifier for the HF. In terms of electronics, the only major difference between the two is that the crossover frequency of the E8 XT is set at 2.2kHz, and that of the E7 XT at 2.5kHz. The circuity is protected against RF interference, excessive output current and over-temperature. There's also protection against potentially damaging transients and excessive subsonic content. The amplifiers have a soft start to avoid switch-on thumps. The power switch is on the rear panel along with a power LED. IEC mains cables are included, and switching for 100-120 or 220-240 V operation is present on the rear panel near the mains inlet.

A look at the spec sheet reveals that the E8 XT can manage a maximum SPL of 105dB at 1 metre, which is more than enough for close work, and the E7 XT is only 1dB shy of that figure. The low end extends down to 42Hz for the E7 XT while the E8 XT goes down to 35Hz, and both models have an upper limit specified at 20kHz. Input can be on either a balanced XLR, balanced jack or unbalanced RCA phono, and user adjustments on the rear panel include a HF control (continuously variable over a ±6dB range) as well as a mid-range EQ band centred on 1kHz. These two controls both have centre detents, as does the level control. Acoustic Space settings are also included, and these trim the low end to compensate for placement near walls or corners, with options of flat, -2 or -4 dB selected via a slide switch. There's also a switchable high-pass filter for use with subwoofers, and that can be brought in at 80Hz, 100Hz, or left switched off.

While truly esoteric performance can't be expected from a monitors in this price range, the Eris E8 XT gives a good account of itself. I tested a pair with the EQ controls set to flat and with the speakers set up on Primacoustic Recoil Stabiliser platforms on my desktop, away from the back wall. For comparison I used my Event Opals, which I regard as very credible monitors, and also my AKG headphones, though given that a pair of Eris E8 XTs cost less than the VAT on the Opals, it would be quite unreasonable to expect them to deliver the same results. However, such a comparison does help identify areas of compromise. On a range of material the Opals sounded drier and tighter, with less overhang on bass notes and kick drums, but the Eris E8 XTs certainly didn't disgrace themselves. They remained smooth but detailed-sounding at the top end, very clean in the mid-range and punchy at the bass end without excessive smearing at low frequencies.

They remained smooth but detailed-sounding at the top end, very clean in the mid-range and punchy at the bass end without excessive smearing at low frequencies.

Their general tonal balance in the room came quite close to what I was hearing both from my Opals and my headphones, and though the Opals won out on focus and tightness, I found the Eris E8 XTs suitably revealing, non-fatiguing and capable of a well-defined stereo image. I'd certainly have no problem mixing on a pair, and taking on board that most home studios are compromised to some degree by imperfect acoustics, there's an argument for not considering really high–end monitors until you get the acoustics properly sorted anyway — which may not even be possible in some domestic rooms and garage conversions. In many rooms you'll always need to double-check on headphones, which is no bad thing as that's how many people listen to music these days.

When the slightly smaller E7 XTs arrived, I set them up in the same way as I did for the E8 XTs and again compared their sound with my Event Opal monitors and AKG headphones. If anything they seemed to be very slightly forward-sounding in the mid-range, but dropping the mids by just a dB or so using the rear panel controls brought the overall sound much more into line with my existing monitoring. That just goes to show that having control over the mids rather than just the bass and treble levels is very important when you need to adjust the response of these speakers to match their location, especially if you have them mounted on a desk.

Both models provided more than enough clean level for nearfield use and, as promised, the sweet spot is wide enough that two people can work together while still enjoying a similar sonic experience. Although more money will obviously buy you more accuracy, we're in the land of diminishing returns here, and given their entry-level pricing, I have to say that both the Eris E7 and E8 XTs turn in an impressive performance for their price.

While built to a price, it looks as though the money has gone into good design and decent-quality components rather than flashy frills, and as a result both of these monitors represent good value for money.