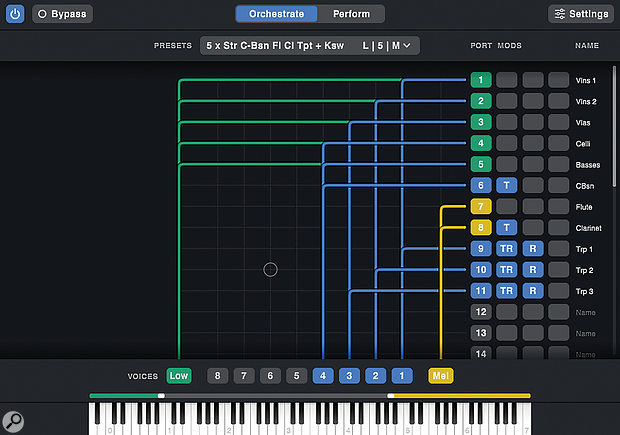 The routing system is very intuitive, even with complex configurations. Here, four voices are routed to five string parts: voice 4 plays cellos coupled with basses and contra bassoon playing an octave lower. Voices 1, 2 and 3 also play trumpet staccatos via three Repeaters, whilst the Melody voice plays flute and clarinet in octaves. The Low range is used for keyswitched articulation changes in the strings.

Suffering for your orchestral arrangements? Divisimate can help.

Creating multi-part MIDI orchestral arrangements is challenging and absorbing, but it can also be a daunting process, especially when you start with a blank canvas. What combination of instruments will work best, and which voicings? One typical workflow is to lay each part down one by one, choosing sounds and building the arrangement as you go. Alternatively, you might opt to work out parts using one instrument — a piano or a generic polyphonic string patch, for example — and then split the parts out by hand to individual MIDI tracks. Both approaches can be very time-consuming, with frequent returns to the drawing board. Wouldn't it be great if you could simply play, and hear each note of a chord going to its intended instrument — and record the results — all in real time? Well now you can, as this is exactly what Divisimate is designed to do.

Divisimate runs as a stand-alone application that mediates between your MIDI keyboard and DAW, in much the same way that a stompbox sits between a guitar and amplifier, except it's processing MIDI events, not audio. It appears in your DAW as 32 virtual MIDI ports, each port addressing its own VST Instrument. Divisimate intercepts incoming chords from the keyboard and splits them into individual 'voices', each of which is sent to one of the 32 ports. In order for the DAW to acknowledge the output ports, Divisimate needs to be run prior to starting the DAW. The process for activating the ports differs for every DAW — in my case I'm using Cakewalk, which found all 32 ports with no problem. You don't have to enable all 32 ports, just as many as you think you'll need — you can always enable more later if necessary.

Logic presents a different case, as it can't address 32 ports, so as of version 1.1 Divisimate includes an optional Logic Mode (activated from the Settings page). In this mode, Divisimate's ports 1‑32 are renamed as ports A (channels 1-16) and B (channels 1-16). Ports A and B correspond respectively to ports 1 and 2 in Logic. A full explanatory video is available on Nextmidi's YouTube channel, along with many other clear and informative tutorials.

Up to eight simultaneous notes can be analysed and split into individual voices. So how does Divisimate coordinate this seemingly impossible feat? The answer is... via a very slick and intuitive interface. Eight buttons above the keyboard graphic represent each voice from high to low; running vertically down the right-hand side are the 32 output ports. Taking a typical SATB scenario such as violins, violas, cellos and basses, the logical approach is to assign voice 1 to violins on port 1, voice 2 to violas on port 2 and so on. With voices 1 to 4 activated, routing voices to ports is as simple as clicking on the matrix at the intersection where they meet; connections appear as blue lines. Assuming MIDI channels are correctly set and MIDI echo thru is on for all relevant MIDI tracks, each note of a four-note chord should play the correct instrument in top-to-bottom fashion. As you move around playing different chords, the instruments keep track, following any internal movements, leading voices and bass notes. A single voice can also drive multiple ports, thus duplicating a part on two or more instruments. For example, to have a flute doubling the violins, simply add another intersection point on voice 1, routed to port 5 which is driving the flute.

Additional to the eight voice buttons are two more: Low and Mel (melody). Activating either of these reveals key range sliders; these key ranges work independently and are excluded from the analysis engine, but can be routed to multiple ports in the same way. Use these to play a melody part, bass, or any other sounds you like. One useful application of the Low range is to dedicate it to manual keyswitching, whilst bearing in mind that if manually keyswitching multiple instruments to matching articulations, their keyswitch locations have to correspond. 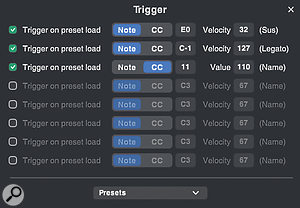 The Trigger modifier: when this particular Divisimate preset is invoked, it sends instructions to the violins to select the sustain articulation, turn Legato on and set CC11's volume level to 110. 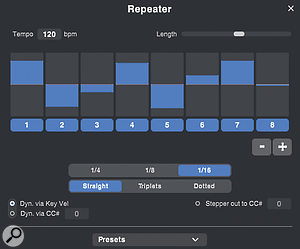 The Repeater modifier: a step-sequencer that outputs customised rhythmic patterns in a variety of note values. Overall dynamics can be controlled by key velocity or any MIDI CC.Three types of modifier can be applied to each port: Transposer, Trigger and Repeater. The Transposer needs little explanation; the Trigger sends up to eight different MIDI messages to whichever ports it's applied to. These are sent when a preset is selected, and can be either note numbers or CC values, for example keyswitched articulation changes, legato or sordino on/off commands, volume levels — the possibilities are numerous.

The Repeater is essentially a rhythmic sequencer with control over the number of steps, note value and note length. Overall dynamics can be optionally governed by key velocity or MIDI CC. Since each port can host independent instances of the Repeater, this offers the possibility to create interesting polyrhythmic 'duelling ostinatos' between instruments.

One drawback is that Repeater's tempo is set manually, and currently does not sync to the host. The makers assure me that tempo sync'ing is top of the list for a future update. 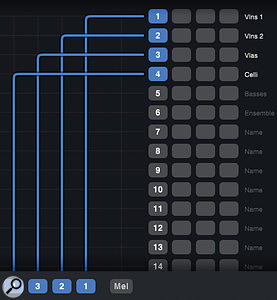 Configurations can be as simple or complex as you like; this is a basic four-part split for strings.Divisimate can store 100 configurations (presets), displayed as five pages of 20 presets per page. Managing your presets couldn't be easier — invoking the Manager opens an explorer/finder window containing the Presets folder. From there you just drag and drop the ones you want directly onto any empty slot.

Whilst Divisimate saves presets as individual files, though, it currently doesn't save complete collections of 100 as a 'global suite'. Something to consider for an update, perhaps? One excellent aspect of preset selection is the preload function. This allows you to choose a new preset whilst notes of the current one are still playing. The new preset instantly kicks in the moment all notes (or the sustain pedal) are released.

The inevitable question is: what happens if you play more (or fewer) notes than there are specified voices? Releasing some notes of a chord to play new ones (whilst continuing to hold the others) is rarely problematic. Releasing all notes of a four-note chord and then playing two may result in them going to the wrong instruments.

Having recently used Divisimate in an orchestrally heavy project, it saved an enormous amount of time that would have been spent splitting parts manually.

Divisimate appears to offer its best guess based on the pitch range of the new notes compared to the most recent ones, but can often get it wrong. Having presets prepared with the appropriate configuration changes is therefore essential for live performances. When recording, you can simply stop, reconfigure Divisimate accordingly, and restart. It's just a case of working out what works best for the situation.

Having recently used Divisimate in an orchestrally heavy project, it saved an enormous amount of time that would have been spent splitting parts manually. Yes, there was a fair amount of fine tuning of note lengths, timings and dynamics controller curves, but that would have been necessary under any other circumstances. However, the ability to record multiple instruments in one take made the process of arranging a real pleasure. That said, Divisimate perhaps offers less assistance when dealing with more complex parts involving lots of rhythm and counterpoint — these are probably best done one part at a time. But for simpler, chordal arrangements with a consistent voice count there's arguably no faster way to get them down. Whilst Divisimate is clearly aimed at media composers working with large orchestral templates, there's no reason be constrained by that. Imagine the sheer variety of unusual tonal combinations that could be produced using it with synthesized sounds...

A free Divisimate app enables remote selection of presets from Android and iOS devices. Since such devices can be located in an accessible position for the player, the app is clearly aimed at live performers — as long as a Wi-Fi signal is available, of course. Perhaps Bluetooth could have been offered as an alternative, as most modern devices are equipped with that. In practice the app works perfectly on my Android phone, with no lag — preset selection is instantaneous.

Usefully, if your phone/tablet is tied up doing other tasks, presets can also be changed using either CC31 or standard Program Changes 1‑100.