This convenient acoustic screen doesn't have to be used just for vocals, and is a versatile and effective tool for home-studio recording.

It seems that the subject of acoustics in the home studio is begining to get the attention it deserves, and affordable acoustic treatment is now available from a number of companies including SE Electronics, Auralex, SM Pro Audio and Real Traps. If people are paying more attention to the space in which they record, this can only be a good thing, but an interesting and novel complement to conventional room treatment is also available in the shape of portable, stand-mounted screens such as SE's hugely successful Reflexion Filter, and now Real Traps' Portable Vocal Booth. 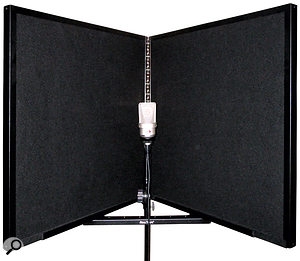 Real Traps are an established name in the US acoustics marketplace, and their products offer an increased performance level over simple acoustic foam, albeit at a correspondingly higher cost. The Portable Vocal Booth is currently available only by direct order from the manufacturer, but they are quite happy to ship to Europe. Although designed to use with vocals, it can also be useful when recording acoustic guitar, guitar amplifiers, or any other source where separation needs improving, or where room reflections need to be kept out of the microphone.

Constructionally, the device seems similar to the full-scale Real Traps, but rather thinner (around one and a quarter inches per panel) and, at just 11 pounds, lighter. A pair of two-foot square panels are hinged in the centre. There is also an adjustable mounting system that can be fitted to a mic stand. I'm not sure whether the panels are simply high-density Rockwool, with a porous material on either side, or whether there's a membrane involved, but they certainly do the trick. Our review sample was black, but you can also get white, wheat or grey if you prefer. Each panel has a metal outer frame to keep it rigid, and the frames are hinged along their complete length.

The mount comprises a pair of metal channels that pivot on a central bar, so that the Portable Vocal Booth can be set up at any angle, with its centre of gravity more or less over the mounting point. A knurled locking ring is provided to help fix the mount to a mic stand, though it should also be possible to use a mic stand clip or shockmount to secure both the mount and the mic to a single stand. In fact Real Traps recommend using a boom stand and then trapping the mount between the upright and the boom pivot, using the knurled nut as a kind of large spacer-washer, but I found a stand where it screwed on perfectly, so there are clearly a few practical mounting options.

As with the Reflexion Filter, the idea is that you sing towards the apex of the 'V' shape, which shields the sides and rear of the mic from reflections, as well as reducing the amount of vocal energy getting out into the room: the less sound escaping into the room, the less there is to reflect back. However, I'm a great believer in putting something absorbent behind the singer too, as cardioid mics are most sensitive in that direction and will pick up any wall reflections coming from over the singer's shoulder. The most practical, cheap solution is the ubiquitous duvet, but where you want something more professional-looking, you could put a second Portable Vocal Booth behind the singer or use it in conjunction with another similar product. The Portable Vocal Booth is much larger than the SE Reflexion Filter and so should be more effective in screening off relections, but this also means that if you put it behind the mic, it is more likely to obscure the singer's view of other players, or of the engineer.

Because the Portable Vocal Booth is built around a stable 'V' shape, it is also suitable for table-top use or on the floor, where it can be used free-standing. The table-top approach will be ideal for voiceover work, and standing it on the floor is perfect for getting a bit more separation between guitar amplifers or similar sources. 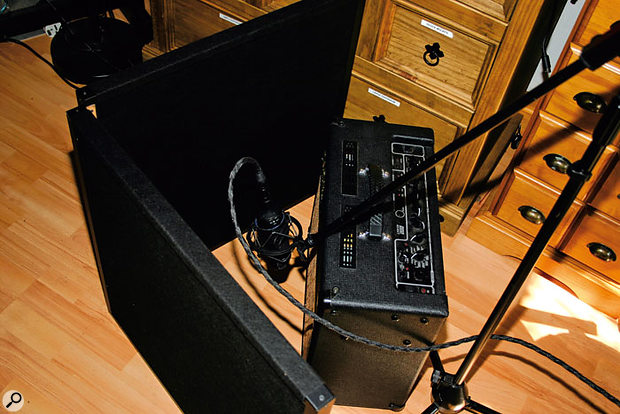 Not just for vocals: the versatility of the Portable Vocal Booth should make it a worthwhile addition to many home studios.

I tested the Portable Vocal Booth with a cardioid vocal mic and found that it made a useful difference on its own, but it worked even better in conjunction with an absorber behind the singer. Used this way, even the worst room can be vastly improved, and in a typical domestic room there's no reason not to get results that rival a professional vocal booth. Most vocal recording problems can be traced back to the acoustic environment in which they are made, so you're a lot better off in the first instance buying a product of this type than spending extra money on an over-specified microphone or mic preamp.

As I have a Reflexion Filter in my studio already, I tried using both, with the Reflexion Filter in front of the singer and the Portable Vocal Booth behind, and this worked really well. Neither product significantly affects the tonal quality of the mic unless you position the microphone too close to the screen, and the larger area of the Portable Vocal Booth means you can afford to work a bit further away from it.

If you do any amount of recording with microphones (as distinct from, say, sequencing synths), then one or two Portable Vocal Booths would come in very useful: they are surprisingly versatile and have applications far beyond vocal recording. Conveniently, they also fold up flat for storage, so you can hide them under the bed, or in the back of a wardrobe. The large area of the Portable Vocal Booth when open makes it very effective in most situations, though the barrier to visual contact may be a consideration for some applications. Even taking into account shipping, this is sensibly priced. It is also well made and should provide many years of reliable service.

As mentioned in the main article, there are now a few similar products on the market, though all have different strengths and weaknesses. If you are considering purchasing the Portable Vocal Booth, you might also want to look at SM Pro's The Mic Thing, the Auralex Max Wall, and SE Electronics' Reflexion Filter...

...and of course the classic SOS duvet!

A useful and versatile acoustic treatment product that improves the sound of vocals and other sources recorded in a typical project studio.