Rode have built on the technology from their respected NTK to develop an affordable new multi-pattern valve mic. 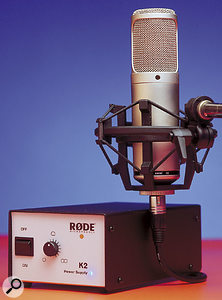 Photo: Mark EwingIt's almost two years since I reviewed the Rode NTK valve mic, and it turned in such an impressive performance that both SOS 's Debbie Poyser and myself ended up adding one to our respective mic collections. Valve mics inevitably cost more than their solid-state counterparts, but they are far more affordable today than ever before and they remain popular because of their flattering musicality. At first, fixed-pattern tube mics such as the NTK were about as much as the home user could be expected to afford, but as Rode have developed more sophisticated means of production in their native Australia (the new K2 is entirely designed and manufactured in Sydney), they are now able to offer the multi-pattern K2 at a very attractive price.

From NTK To K2

Physically, the mic is almost exactly the same size as the NTK, but has a different grille design with a heftier support frame. It features a large (one-inch diameter) dual-diaphragm capsule with gold-sputtered, edge-terminated mylar diaphragms. As with the NTK, the onboard circuitry is based around a selected 6922 dual-triode tube operating in a Class-A configuration, working in conjunction with bipolar output transistors so that no output transformer is required. The tube is held in place in its porcelain socket by means of a plastic spring clip, and the standard of mechanical and electrical engineering is up to Rode's usual very high standard.

All the electronic components are mounted on a glass-fibre circuit board, while the capsule itself is shockmounted. Such wiring as there is is very neatly executed. The double-layer, stainless-steel grille mesh provides the necessary screening from radio frequencies, while also protecting the fragile capsule from physical damage, and the all-metal housing is beautifully machined and finished with a matte nickel plating. Access to the tube compartment is achieved by unscrewing the main body sleeve, and a knurled locking ring is used to secure the included SM2 shockmount. 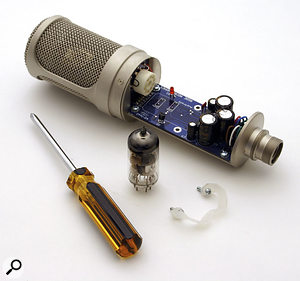 The K2's internal valve can be replaced without any soldering.Photo: Mark EwingThe mic comes in a tough moulded RC2 plastic travel case of the type normally associated with power tools, and includes not only the shockmount and power supply, but also the necessary multi-pin XLR cable to connect it to the power supply. The mic itself has no switches or other controls and the mic pattern is adjusted using a continuous rotary control on the power supply. This provides everything from omni, through various widths of cardioid, to figure of eight. A gold-plated stud indicates the 'hot' side of the capsule, in Rode's usual tradition.

There are no pad or filter switches on the PSU, but this shouldn't be a problem, as most mic preamps and mixers have the necessary low-cut filters and, with a maximum SPL handling of an incredible 162dB, you'd probably have to shoot this mic to get it to distort! I always like to remind potential purchasers that the paper spec tells you precious little about the sound of a mic, though it can help to establish how quiet or sensitive it is. The quoted sensitivity figure is -3dB (reference 1V/Pa) and the equivalent noise figure is just 10dBSPL (which means there's a signal-to-noise ratio of 81dB) — rather better than some solid-state mics, and a little quieter than the NTK. The frequency range is 20Hz-20kHz, with little deviation other than a very deliberate, but still suitably subtle, presence peak centred at around 12kHz in omni mode. Another lesser peak at around 5kHz is evident in cardioid mode, which is very reminiscent of the NTK's response shape. This is about the only part of the spec that might give a clue as to how the mic might sound, as this type of presence peak often results in an open and airy high end.

If anything, the Rode K2 is a hint sweeter-sounding than the NTK, and it definitely does the 'subtle flattery' thing — which is, after all, why we tolerate tubes inside our microphones in the first place. The way in which it flatters is hard to describe, but, in addition to adding weight to what I call the 'chest' frequencies of the voice, it also captures the high-end detail in a way that sounds noticeably smoother and less aggressive than is often the case with solid-state mics. As with the NTK, the lack of a bass roll-off switch means you'll probably need to engage the low-frequency filter on your preamp or mixer when recording vocals, and you'll certainly need a pop filter. In fact, pop filters are such essential components of any vocal recording system that I'm surprised more mics don't come with them — they're just as important as shockmounts, yet we seem to get those thrown in with nearly every mic we buy these days.

As a vocal mic, the K2 sounds very classy indeed, and it has been deliberately engineered to be reminiscent of classic studio mics. It is, however, rather quieter than some of these tube classics, and probably a lot cheaper to service given that the tubes used in the Rode mics don't belong to an endangered species. This is a great mic if your voice needs a bit of filling out, or if the high end of your voice needs rounding off. I also tried the mic on the usual acoustic guitar and hand percussion, where it turned in a solid performance, combining warmth with evenness of tone. I particularly liked this mic for strummed acoustic guitar played in a pop style, as you get a punchy, no-nonsense result that sounds almost as though it's been slightly compressed, with no ragged edges.

Rode's K2 is a great performer, offering multi-pattern functionality at a very affordable UK price. Rode have risen well above the bargain-basement dog fight that seems to be going on at the moment, so the K2 isn't the cheapest tube mic on the market by a long stretch, but it offers quality, both mechanically and sonically. Anyone in the market for a large-diaphragm multi-pattern mic should audition the K2, if only to find out what the others have to live up to.

The Rode K2 is a very nice multi-pattern tube microphone, with a warm, classic sound. Although there are cheaper mics coming in from various Far Eastern locations, it offers a very good balance of price and quality control.