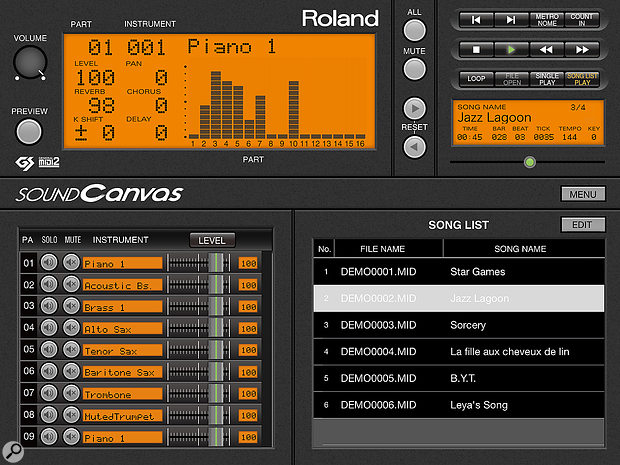 In 1991 Roland introduced the company’s first Sound Canvas module, the SC55. Aimed at the enthusiast market, the SC55 offered pared-down functionality from Roland’s RS-PCM and LA synthesis engines in a neat little box. It was ideal for those who couldn’t afford the more professional U220 or D110 modules, and I remember being very jealous when I got the chance to play with a school friend’s SC55.

While the SC55 wasn’t revolutionary in its sound or functionality, it had the distinction of being the first module that supported General MIDI (GM), which standardised, amongst other things, what instruments should be mapped to the 128 program-change slots. This meant you could take a MIDI file created for one GM module and know that when you played it back on another you would indeed hear the intended sound of an electric guitar rather than a bassoon. The SC55 also took things a step further by supporting Roland’s extended GS sound-mapping, which specified how sounds should be mapped beyond the 128 available program changes using banks.

Twenty-four years and many Sound Canvas modules later, Roland have now brought the Sound Canvas sound set to iOS in the form of a universal app aptly named Sound Canvas For iOS, available from the App Store for £14.99$19.99. Loosely based on the SC8820 module, Sound Canvas is 16-part multitimbral and provides just over 1600 sounds with 63 drum kits.

The default user interface pays homage to the SC55 with a recreation of the orange LCD display, although an alternative, slightly more modern interface is available by swiping two fingers to the left. With its larger display, the iPad is able to display all elements of the UI on one page, whereas on the phone you swipe two fingers up or down to reach the different sets of controls.

Most of the values on the LCD display can be edited by simply tapping them, and then adjusting the value from a pop-up display that appears in the centre of the screen. Tapping the Instrument name brings up a full-screen index of available sounds, where you can choose Instruments from a selection of categories and even a selection of mappings. Sound Canvas supports various maps to be compatible with earlier modules, including the SC8820, SC88 Pro, SC88, SC55, and even the CM64, which combined Roland’s CM32L (basically an MT32) and CM32P (a U110 with one expansion slot) into a single module. It’s just a shame there’s no way of entering a search string to help you find the instrument you’re looking for.

So what about the sounds themselves? If you’ve heard a Sound Canvas before you’ll know exactly what to expect, and all the old favourites are there — Fantasia, Warm Pad, Voice Oohs, SynCalliope, and the unforgettable Gt.FretNoiz — along with my least favourite Roland sound ever: Ice Rain. But when I say old, I mean old: these are not modern, crisp, cutting-edge sounds. However, considering the relatively small cost to have a Sound Canvas-based module in your pocket, it’s hard not to have a renewed sense of affection for them. 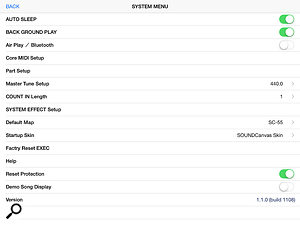 Away from the main screen, the settings page is a touch spartan. My biggest gripe with Sound Canvas is the way in which settings are adjusted beyond what you see on the main user interface. Rather than there being a nice graphical interface for, say, adjusting the global reverb effect parameters, as you might expect (or hope), all of the more ‘advanced’ settings are accessed via a fairly ugly hierarchy of pages that use bog-standard iOS controls. So to adjust the Reverb Time parameter, you tap the Menu button to open the System Menu, followed by System Effect Set-up, Reverb, Reverb Time, and then you can adjust the parameter from a picker control. There has to be a better way.

If you’re old enough to remember the original Sound Canvas SC55, you might also remember a companion product Roland released called the Sound Brush SB55 — canvas, brush, geddit? The Sound Brush was a MIDI file player (and recorder) housed in an identically styled enclosure to the SC55, featuring a 3.5-inch disk drive to load and save MIDI files. As if to be an homage, Sound Canvas for iOS also implements simple MIDI file playback functionality, and you can make MIDI files accessible to the app via iTunes file sharing. It’s possible to play back individual files or create a song list if you so desire. And if you’re really looking for a burst of sentimentality, you can search the Internet for the original SC55 demo songs and once again enjoy masterpieces like Jazz Lagoon in all their ’90s glory.

As you would expect, Sound Canvas supports Core MIDI, responding to both external MIDI input and adding a virtual MIDI port to the system when the app is loaded. While the initial 1.0 release offered no support for Inter-App Audio (IAA) or AudioBus, the latest version 1.1 includes support for both. In IAA speak, Sound Canvas operates as a Generator, meaning that while you can record the app’s audio output into another app, you can’t send MIDI messages to it directly via IAA. Practically, this means you won’t be able to use Sound Canvas directly on a MIDI Track in Cubasis, for example; instead, you’ll need to create a MIDI Track to send MIDI to the app via the virtual MIDI port, and then create an Audio Track to record and monitor the actual audio output. However, this is probably a sensible approach given that Sound Canvas can play 16 instruments at once but offers only one audio output.

One of the most obvious competitors for Sound Canvas is IK Multimedia’s SampleTank, which sells for exactly the same price (although a free version is also available so you can try some of the sounds before making a purchase). Weighing in at a whopping 1.03GB, the sounds are, perhaps unsurprisingly, a little more contemporary than those offered by Sound Canvas (which is less than 40MB), and this might be the most important factor if you’re considering buying just one iOS-based sound module. Interestingly, though, despite the fact SampleTank has the larger memory footprint, the same isn’t true of its CPU usage. Playing a Bach prelude (BWV 871) with a piano loaded in both apps (using Apple’s Instruments developer tool to measure the performance) Sound Canvas used an average of 16.4 percent CPU whilst playing the piece on my iPad Air 2. SampleTank, on the other hand, averaged a mere 3.6 percent, which was a little surprising.

Despite not offering the freshest sounds on iOS (is it still cool to use that word?) Sound Canvas still has a few things going for it. In particular, anyone who wants a slice of nostalgia will really get a kick out of this app. But also, if you want a convenient all-in-one app to play back General MIDI files, Sound Canvas is more than up to the job, even if the result will sound a bit like a Butlins’ karaoke night in the mid ’90s. However, given the large quantity of sounds on offer, you’re bound to find more than a few patches to contribute a slightly different colour to your iOS productions.