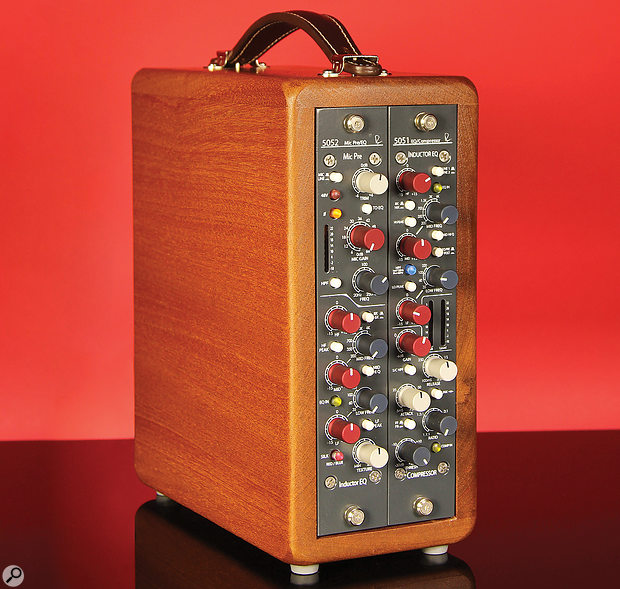 These classy modules bring the best of Mr Neve’s classic designs into the 21st century.

I’ve never borrowed a penny from Rupert Neve, but I owe him a great deal! A long time ago, I sat down behind a Neve console in the basement control room of a tiny, long–forgotten studio in an Edinburgh back street. That console was a 1970s,16:4 8014 Small Studio Console, loaded with 1073 mic pre/EQ input modules. I learned how to listen and how to engineer on that 8014 and, to this day, its sound remains etched on my aural memory. Two decades had to pass before I found myself in another long–gone studio, sitting in front of a 1970s Neve, this time around a fully rebuilt 32:16 8048 loaded with 24 1064 and eight 1073 modules.

Over 40 years after those two consoles were built, the sound that Rupert Neve pioneered and developed in his old rectory in Little Shelford still entrances recording engineers and producers. Although original 1073 modules are now relatively rare and savagely expensive, you’ll find ‘1073’ modules waiting for you, ranging from painstaking recreations by AMS–Neve and a handful of ‘boutique’ manufacturers, all the way down to DIY homebrew designs.

The Long Road To RND

It seems to me that Rupert Neve has never been one content to stand still and rest on his laurels. Having sold the company that still bears his name, he founded ARN Consultants in 1975. The end of his involvement in the ill–fated, original incarnation of Focusrite in 1989 was followed by a period of consultancy with Amek that culminated in the launch in 1993 of their System 9098 console. In 1994 Rupert and his wife Evelyn moved to Wimberley, Texas, where, in 2005, ARN began trading as Rupert Neve Designs (RND) and launched the first of the Portico product line.

Over the last 10 years, the engineering team at RND have released a steady stream of new products, all of which are based on the sonic principles of his classic design, but have been built for a world dominated by DAW software — so although you can clearly see their heritage, none of those products have been clones or copies of their ancestors.

With the launch of the Shelford Series 5051 EQ/Compressor and the 5052 Mic Pre/EQ, RND engineers have now cast their eyes back to the old rectory and have combined vintage design elements (from both the 1064 and the 1073) with concepts and components from the Portico series, to create a contemporary take on a vintage channel strip.

The Shelfords are handsome units, their thick steel front panels finished in the classic blue found on early Neve consoles. The rotary knobs are anodised metal, their colour following their function: red for control, black for selection, silver for anything else. Illuminated LED buttons indicate key active functions, and smaller white buttons handle any switching.

Although both the 5051 and 5052 can be fitted into the penthouse of an RND 5088 discrete analogue mixing console, they both require a ±24V external power supply and custom–sized racks for stand-alone use. RND supply two-, four- and nine–module racks, and five- and 25–way power blocks to satisfy those requirements.

Both the 5051 and 5052 feature Class–A, discrete–component, ±24V circuit topologies. Traditional transformer–coupled inputs and outputs are used in both, for technical as well as musical reasons. Their signal paths employ Class–A gain blocks, and use as few of them as possible to get the job done. This minimalist approach, coupled with custom–wound inductors and transformers, is designed to give both units the performance, sound and musicality for which the 1064 and, in particular, the 1073 are known.

Both the 5051 and the 5052 are equipped with a three–band inductor–based EQ in which the use of Class–A, low feedback, discrete–component electronics plays an important role in preventing the sound being undesirably affected by low–level artifacts and harshness. History repeats itself with the use of a custom–tapped inductor and carefully selected capacitors in the mid–range. Inductors are also used in the high– and low–shelf EQ, where the shelf curves are based on those of these two vintage designs.

In some senses, this is a bit of a ‘greatest hits’ EQ, with the low–frequency band being based on that of the 1064, the 1073 supplying the mid-range’s inspiration, and the high–frequency circuitry being a hybrid of the 1073’s inductor and modern capacitor componentry. However, the EQ circuitry is no slavish copy of its antecedents: it’s much more an update of the original designs, using components and design techniques that simply didn’t exist when the 1064 and 1073 were being developed. The redesign has given RND’s engineering team the opportunity to add flexibility to the original implementations. 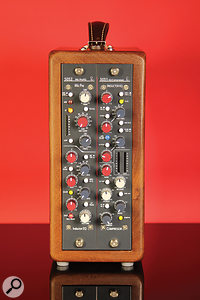 The 5051 and 5052 both inherit many features directly from vintage Neve console modules, but also from the more modern RND Portico series. In the case of the LF band, which acts at the vintage frequencies of 35Hz, 60Hz, 100Hz and 220Hz, the addition of a peak filter to the original shelf filter makes available a bell–curve option, to give a total of eight different LF EQ response curves, adding a finer level of control to the 1064’s signature bass sound.

The Q of this 1073–based mid–range EQ narrows as cut or boost increases and, conversely, widens as cut or boost decreases. Overall, the Q tends to be slightly wider at lower frequencies and slightly narrower at higher frequencies. In a deliberate design decision, the Q is also narrower for cuts than it is for boosts. This makes a lot of sense to me since, when particular frequencies are being cut, they are usually the ones causing problems. When engaged, the Mid Hi Q switch, which wasn’t present on the original 1073, narrows the Q considerably, giving the 5051 and 5052 a finer frequency focus than was available on the 1073.

For the high frequencies, not only has a bell–curve peak filter been added alongside the original shelving response, but also the 1073’s original fixed corner frequency of 12kHz has been replaced by a switchable choice between 8kHz and 16kHz to give a total of four different HF EQ response curves.

The one difference between the 5051’s EQ and that of the 5052 is in the placement of the high–pass filter. In the 5051, the HPF is an 18dB/octave Butterworth filter, set at either 60 or 120 Hz, which sits inside the EQ between the mid-range and the HF and LF shelving circuits. This positioning is dictated by the fact that the EQ section in the 5051 can be switched pre– or post–compressor.

In the 5052, it’s a 12dB/octave high–pass filter, and it’s continuously variable between 20 and 250 Hz. This sits in the audio path immediately after the input gain and trim controls, a circuit position which is necessary because both the mic preamp and EQ have their own separate balanced XLR inputs and outputs — an HPF that was part of the EQ circuit would not be active unless the mic preamp was being routed through the EQ.