With RND’s famous Silk circuitry on board, this summing mixer allows you to dial in texture to taste.

Rupert Neve Designs’ 5057 Orbit is an elegant 1U rackmounting 16x2 summing mixer that contains all the salient parts of the company’s own Rupert Neve‑conceived mixing consoles, but without all the extraneous controls, the physical size, or the substantial budget. What’s on offer here, in a compact 4.5kg unit that extends a modest 230mm behind the rack ears, is a simple unity‑gain mixer with 16 balanced analogue line‑level inputs, but the stereo outputs are transformer‑coupled, and RND’s popular Silk circuitry is included for even more characterful ‘texture’.

A pair of AES59/Tascam D‑sub sockets accept the 16 line inputs with a nominal 16kΩ input impedance. Each input is capable of handling signals up to +26dBu (so there are a few decibels of headroom over the +24dBu maximum output of professional converters) and is individually buffered, using the well‑proven NE5534 op‑amp, which also unbalances the signal to feed the stereo mix bus. Odd channels go to the left, even channels to the right, and front‑panel buttons also allow the first eight inputs to be summed to mono, in four independent pairs, if desired. There’s no extra summing attenuation (no ‑6dB pan law, for example), though, which means that if identical signals are present on both inputs the mix contribution is 6dB greater when summed to mono, and it’s not obvious at a glance whether these mono buttons have been pressed; as there are no status LEDs, there’s a little potential for confusion here should a button be pressed accidentally.

All balanced inputs feed the summing bus with a fixed unity gain; there are no input level trims or pan controls to fine‑tune the mix. Any mix optimisation must be done in the DAW before feeding the stem outputs to the 5057’s mix bus.

A TRS socket on the rear, labelled Link In, allows another 5057 to inject its stereo mix bus into the busses of the receiving unit; RND recommend daisy‑chaining up to four 5057s in this way, for a total of 64 channels, although it’s possible to add more if desired. The mix‑bus amplifiers use more NE5534s, as do the Link output buffers, which provide unbalanced outputs from the mix bus on another TRS socket to feed the Link inputs of another 5057, or of related units, including the 5059 Satellite and 5060 Centrepiece.

A pair of indicator LEDs shows the signal level on the mix bus, lighting green from ‑20dBu and changing to red at +24dBu. A precision rotary 12‑step attenuator switch trims the mix level downwards by up to 20dB before the output transformer stage, its inter‑channel matching being within 0.1dB at all settings. The attenuator offers 1dB increments down to ‑6dB, followed by 3dB steps thereafter, until the last 2dB step. The output section includes the Silk effect circuitry (of which more below), and features some elaborate class‑A circuitry, involving a number of discrete transistors which drive the large output transformers. These are located at the rear of the PCB motherboard and mounted at right‑angles to each other, to avoid magnetic coupling. 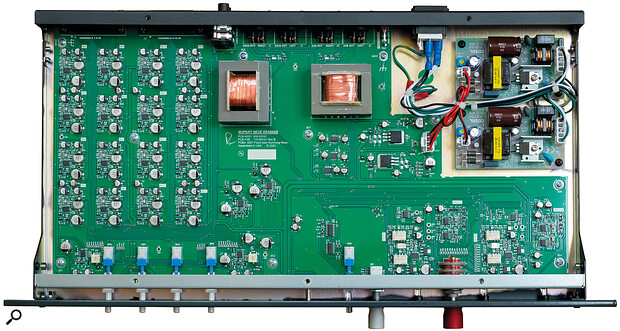 The circuitry is carried on a single large PCB with a separate OEM module for the power supply. Four columns of input buffers occupy the top left of the board, with the two orthogonal output transformers alongside. The mix‑bus amps are either side of the mono buttons, with the Silk circuitry and output sections at the right front.

The transformers have centre‑tapped secondaries, and are wired to provide two balanced outputs. The Main outputs are capable of supplying +26dBu, while the secondary outputs are derived from the transformer centre‑taps, so only use half of the secondary winding and have 6dB lower output level. The idea is to allow the output stage and transformers to be pushed into saturation without potentially overloading the connected destination equipment. Both sets of outputs are presented on male XLRs, and both can be used simultaneously to feed different destinations. A slide switch on the rear panel isolates the XLR pin 1s from the chassis ground to break ground loops where necessary.

Mains power (100‑240 Volts AC) connects via an IEC inlet with integral on/off switch; there’s a power LED on the front‑panel but no switch, unfortunately. The internal switch‑mode power supply generates ±24V rails which are further regulated to ±21 and ±15 V DC for various sections of the audio circuitry. The maximum power consumption is 35W.

The amplitude response plotted against frequency with Silk off (black line) and with the Red and Blue Silk modes active. Red introduces a mild presence boost and high‑pass filter, while the Blue mode lifts the bass a little.

The Silk effect will be familiar to users of other RND products. Pressing the front‑panel button cycles through three modes, Off, Red and Blue, and the button illuminates red or blue to identify the current mode. The Red option introduces a gentle presence boost of 2dB around 4kHz and also emphasises the higher saturation harmonics, while the Blue mode gives a similar amount of boost down at 40Hz and emphasises the lower frequency saturation components. In both cases the strength of the Silk effect can be adjusted with a detented rotary control labelled Texture.

As would be expected, the 5057’s technical specifications are exemplary, with a flat frequency response extending between 10Hz to 50kHz (±0.1dB), as confirmed by my own tests using an Audio Precision test set. The high‑frequency ‑3dB point is at 150kHz. My bench tests also gave the (unweighted) noise floor as ‑97.5dBu, implying a total dynamic range capability of an excellent 123dB. When not being pushed intentionally into saturation, the THD+N figure is an impressive 0.003 percent, and crosstalk from any input to the opposite output channel is well below the noise‑floor at ‑117dBu (measured at 10kHz).

An Audio Precision plot showing the THD ratio against frequency. The black line is with the Silk mode switched off, while the various shades of red and blue lines show the THD when the Red and Blue Silk circuits are engaged with 0, 50 and 100 percent Texture settings.

One area where analogue mixing differs, often quite significantly, from in‑the‑box mixing is in the phase response. Digital summing is phase‑linear by default, whereas analogue electronics inherently introduce frequency‑dependent phase shifts, especially when transformers are involved. The phase response of the 5057 is close to zero degrees from 20Hz up to 3kHz or so, gently falling above that range (reaching around ‑25 degrees at 20kHz) and rising below (+10 degrees at 10Hz). Activating either of the Silk circuits introduces some moderate phase shifts through the presence (Red Silk, +10 degrees) and bass (Blue Silk, ‑10 degrees) areas, and both also create quite dramatic subsonic phase shifts reaching over +40 degrees at 10Hz. The Red and Blue Silk modes also introduce modest frequency response peaks, along with dramatic increases in mid‑ and low‑frequency distortion. The Texture control varies the amount of both the amplitude response and distortion levels.

The phase response plotted against frequency with Silk off (black line) and with the Red and Blue Silk modes active. Note the greatly increased phase shift at low frequencies.

I have only eight channels of D‑A output available on my current DAW setup, so I used these to deliver four stereo stems to the 5057, and supplemented this with another five channels from MIDI‑triggered instruments. The 5057’s outputs fed an external A‑D to record the resulting mix back into the DAW.

There being so few controls, the 5057 is trivially simple to use. Because I generally allow plenty of headroom when tracking and mixing, my initial OTB mix experiments came out sounding very clean and accurate, and comparing them to static ITB mixes revealed only very subtle differences — to the point where I didn’t form a definite preference either way. However, dialling in the Silk feature brought about more obvious differences, with more of an analogue feel; the mix seemed to gel together better and felt slightly more open through the midrange.

I then raised the level of the DAW track outputs by around 10dB, cranked the gain of the MIDI instrument channels (which were routed through a Yamaha DM1000 console), and tried again, with the aim of provoking more noticeable saturation effects. This resulted in far more distinct differences, with the 5057 introducing a very noticeable thickening and richness — this is an effect which could easily become very add ictive. Again, dialling in some Silk effect added a further, controllable dash of sonic flavouring. The Red and Blue Silk options have distinctly different tonal signatures, so they suit different types of material and mixes. As I suggested earlier, the Red Silk mostly enhances the high end while the Blue mode favours the low end, and in the online version of this article, I’ve included some Audio Precision plots that show what’s going on when these different ‘colours’ are being applied.

The Red and Blue Silk options have distinctly different tonal signatures, so suit different types of material and mixes.

Depending on the dynamics of the source tracks, the ability to ease the mix‑bus level back a little is a very useful feature to avoid overdriving the connected A‑D, as well as to help control the output stage saturation. And that brings me on neatly to the provision of the ‑6dB output XLRs. I can certainly appreciate the practical usefulness of this feature, but it strikes me that when the unit is rackmounted it will be difficult to move the output connections around. OK, there are ways around that, such as by hooking all four outputs to a patchbay, but would people really want to use both sets of outputs simultaneously? Personally, I’d have preferred to have a front‑panel switch to change the level coming from a single pair of XLR outputs. There appears to be sufficient front‑panel real‑estate for such a switch, and for a mains on/off switch too (I much prefer rack equipment that I can turn on and off from the front!).

Outboard summing has an obvious practical role when you’re bringing signals out of the box to apply outboard processing, but as a means of improving in‑the‑box mixes it has supporters and detractors. Those who value the technique see it as a means of introducing some analogue character to a mix, often claiming benefits in imaging, depth and cohesion. Personally, I tend to achieve this either by routing an ITB stereo mix through a colourful stereo preamp, or by using a passive summer (which avoids all potential headroom issues) to feed a stereo mix to a characterful stereo preamp. The 5057 takes a similar approach to me, in that the summing side of the equation is pretty clean‑sounding, but RND have then deliberately included tools that impart a range of characters to the mixed stereo signal.

The critical question, then, is this: does mixing through the 5057 bring something useful to the party? The answer is undoubtedly yes. As would be expected of any RND product, the 5057 Orbit is very well built. It has a useful feature set, twice as many inputs as some of its immediate competitors, and it does the job asked of it superbly, with admirable technical specifications. It does exactly what a good mixer should, while also introducing some controllable colour and character in a musical way which can be helpful in polishing what might otherwise be described as sterile mixes.