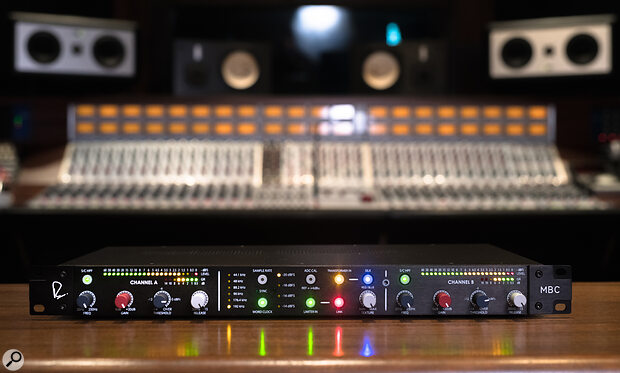 With selectable analogue drive paths and a fast limiter, this box is designed to add controllable vibe and colour as you capture your analogue mix.

In any digital audio system, the quality and integrity of the signal is ultimately dependent on the A‑D converter — because if the musical information isn’t encoded to the highest standards at the start of the chain, any lost or corrupted information can’t be recovered later. Rupert Neve Designs recognise this truism and have addressed it directly with their new MBC, or Master bus Converter, which they describe as “the ultimate tool for creating digital signals…”

The MBC comprises a (protective) stereo peak limiter integrated with a high‑quality A‑D converter, all in a 1U rackmounting box (which extends around 230mm behind the rack ears). It obviously makes practical sense to integrate high‑quality peak limiters with master converters since these two items normally exist at the end of every analogue signal path, and together they jointly define the sound of the mix. Clearly, then, the MBC’s main applications will be in the mixing and mastering worlds, but it could potentially have a role in tracking situations, too.

As you’d expect from RND, the MBC also offers refined tonal shaping options in the form of switchable inter‑stage transformers along with the company’s famed Silk circuits which include an adjustable Texture control. The peak‑limiter’s parameters are also adjustable, of course, and the converter technology employed in it is derived from the company’s RMP‑D8 Dante mic preamp (reviewed in SOS September 2020: https://sosm.ag/rnd-rmp-d8).

The MBC’s rear‑panel connectivity starts with an IEC mains inlet and integral On/Off switch; I’m not generally a fan of rear‑panel mains switches for rackmounted products but it’s a point I’ve made often so I won’t repeat the arguments here. The MBC employs an internal switch‑mode power supply which accepts any mains supply between 100 and 240 VAC, while consuming 45 Watts.

A pair of Neutrik combi sockets accepts balanced analogue line inputs, via Rupert Neve’s TLA (‘transformer‑like amplifier’) circuitry. The maximum input level (for 0dBFS at the digital outputs) is +24dBu but the A‑D alignment can be adjusted, allowing a lower peak input level of +18dBu. These extremes correspond to the SMPTE and EBU alignment standards.

On the rear, combi sockets cater for the analogue line inputs on jack or XLR, while digital output can be AES3 or either flavour of S/PDIF, though there’s no direct computer connectivity.

The stereo digital output is presented as AES3 (on an XLR) and as S/PDIF in both coaxial (RCA‑phono) and optical (Toslink) formats and all outputs can be used simultaneously. I was somewhat surprised to find only simple and ‘old‑school’ digital connectivity here; there are no expansion options to allow audio to be dispatched, for example, over USB, Dante, AES67 (AVB) or any other more modern standard. This means that the MBC has to be used in conjunction with some other form of computer interface with a compatible stereo digital input. Two BNCs are also provided for word‑clock in and out, the former being permanently terminated with 75Ω. Unusually, these two connectors are only active when selected from the front panel.

The front‑panel enjoys plenty of space and the white legends are easily readable. The left‑ and right‑channel limiter parameters reside at the outer edges, while the signal path and A‑D facilities are located in the centre. All the buttons have LEDs to indicate status, and the elegant anodised aluminium rotary controls (in grey, red and dark blue) all have clear pointers on the top and 31 detent actions.

Six standard sample‑rate options are available (44.1 to 192 kHz), while Word Clock synchronises the A‑D with an external clock source connected to the rear‑panel BNC. A Sync LED illuminates if a valid clock source is present and the sample rate LEDs reflect the incoming rate.

The adjustable A‑D alignment is controlled with a button labelled, logically, ADC Cal. This cycles around four options: ‑20dBFS, ‑18dBFS, ‑16dBFS and ‑14dBFS. The numbers refer, perhaps slightly confusingly for some, to the digital output level when receiving an analogue input of +4dBu. For those who like to think in terms of the analogue input level required for 0dBFS, the four options correspond to +18, +20, +22 and +24 dBu.

Of the remaining two pairs of buttons in the centre section, the first pair activate both limiters and link their side‑chains (to ensure stereo image stability). The second pair switch the inter‑stage transformers into the signal path (adding subtle harmonic richness), and activate the Silk transformer saturation circuitry for stronger effects, toggling through the familiar Red (HF emphasis), Blue (LF emphasis), and Off modes. A detented Texture control adjusts the strength of the Silk modes.

Each channel’s limiter is provided with four rotary controls and a button. The button engages a 12dB/octave high‑pass filter in the side‑chain, while the first blue knob adjusts its corner frequency from 20 to 250 Hz, to make the limiter less sensitive to low‑frequency energy. The other three detented controls set the make‑up Gain (Red, with +20dB available), the Threshold (Blue and calibrated with respect to the digital output, from ‑14dBFS to ‘Over’, effectively switching the limiter off), and the Release time (Grey, spanning 50ms to 1 second). There is no auto‑release option, and the attack time is fixed at 0.5ms, as is the ratio at 10:1 (with a 2dB soft knee).

Lengthy horizontal bar‑graph meters indicate the analogue signal level going into the A‑D converters, scaled from ‑60 to 0 dBFS, but with the top half of the meter covering the range from ‑6dBFS. Shorter meters below indicate the limiter gain reduction over a 14dB range, with the upper half spanning just 4dB. The output meters have a selectable peak‑hold function activated by one of two rear‑panel DIP switches; the second switch sets the hold time to either one or three seconds.

The A‑D converter is an AKM Velvet Sound AK5397EQ with 32‑bit filters, while digital output formatting is handled by an AK4115VQ. The limiter circuitry is built around the usual THAT2181 Blackmer VCA chip and discrete transistor stages are employed to drive the interstage transformers. These custom‑designed transformers are well separated on the large motherboard to minimise interaction. The ubiquitous NE5532 op‑amps are used in the side‑chain circuitry, but not in the class‑A signal path. 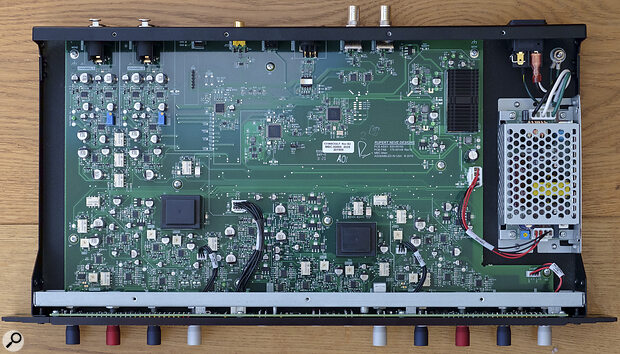 The large single PCB is built with SMD components. The interstage transformers are obvious, along with the discrete transformer stages alongside. The TLA input circuitry is just below the input sockets, while the limiter VCA circuitry is near the front panel, and the converter and digital output chips are in the middle.

Running the review unit through my usual bench test procedures, I measured THD figures of 0.0005 percent without the transformer, rising slightly to 0.004 percent with it switched in. Engaging the Silk modes introduces more harmonic saturation, of course, along with subtle frequency response boosts in different parts of the spectrum (see 'Audio Precision Plots' box).

The signal‑noise ratio (measured over a 20Hz‑20kHz bandwidth) was ‑111dBFS (A‑weighted) without the transformer, improving with the transformers engaged to ‑117dBFS A‑weighted — both figures being in line with the published specs. Similar performance figures were obtained with the AES17 dynamic range test giving figures of 111dB (A‑wtd) without the transformer, and 116.4dB (A‑wtd) with the transformer. The latter result is slightly better than RND’s RMP‑D8 Dante mic preamp (which uses different Velvet Sound AKM converter chips) and the performance sits alongside the Audient ASP880, UAD Apollo and Antelope Audio Orion converters. In other words, comfortably within the upper‑middle ground of professional converters. (For reference, of the 30+ A‑Ds I’ve measured, the top 10 converters measure 120dB A‑wtd or higher.) Crosstalk between channels measured ‑97.3dB at 10kHz, which is an excellent result.

I have often found that running a stereo ‘in the box’ mix through almost any well‑designed analogue outboard device adds something musically beneficial to the sound: analogue warmth, if you like. I think this comes from the inherent imperfections, harmonic distortion, phase shifts and noise that come with transformers, transistors, capacitors and so on. The MBC delivers exactly that kind of analogue warmth to a mix and, while it’s AES17 score might not quite put it into the top‑10 converters judged purely on technical specs, it is most definitely up there in terms of its sound character and the aesthetic musical quality it brings to the party. The limiters are very fast and effective, allowing a mix to be squashed quite hard to be made louder in a nice way, where that’s desired, while the transformers and the Silk enhancements can be used to bring out even more character.

The limiters are very fast and effective, allowing a mix to be squashed quite hard...

Given the RND heritage and the quality of the design, it’s not surprising that this is an expensive piece of outboard. In terms of price, it sits between the Dangerous Music Convert AD+ (which doesn’t have a limiter but does have transformers with variable emphasis, and can send the digital signal over USB), and the Crane Song HEDD Quantum (which includes a D‑A as well).

Being picky, I’d have liked the MBC to include some form of direct connectivity to a computer, which would make it more convenient and more competitive in the marketplace, especially since RND have already developed that technology for their Dante preamp; to not even cater for a future expansion module seems a missed opportunity. Nevertheless, the MBC does what it does extremely well, and it is a joy to use and listen to. If you want to add some analogue polish to a digital mix, the MBC could well be the finishing tool you’ve been looking for.

The Dangerous Music Convert AD+ is probably the closest broadly comparable unit, as discussed in the main text. 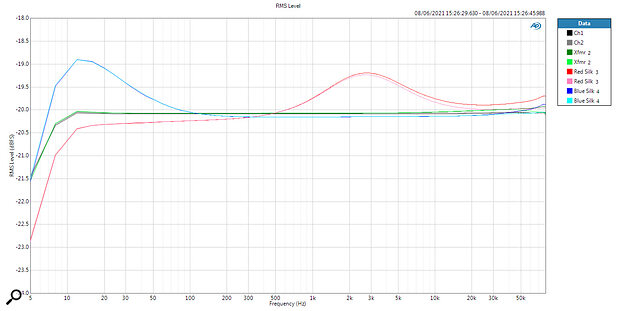 This plot shows the small but significant changes to the frequency response when the blue and red Silk modes are selected.

The blue Silk mode (at half Texture) raises the harmonics a lot more than the clean or transformer paths, especially the odd harmonics.

...and the red Silk mode boosts the even harmonics too.

The straight path has the least harmonics, as you’d expect. 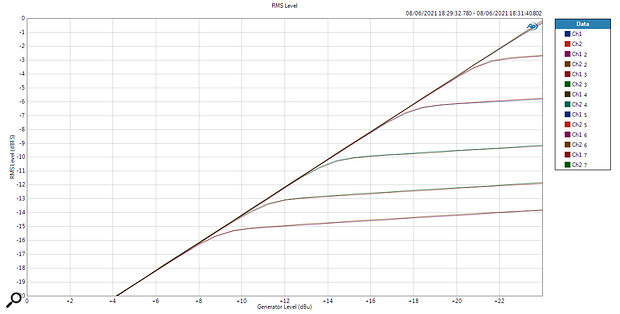 The usual transfer plots showing the limiter curves at different threshold settings. There’s a consistent 10:1 ratio with a soft knee action over the first 2dB of limiting.