Readers with an interest in RND’s Portico product line may well think that the Shelford 5051 looks familiar, and they wouldn’t be wrong. The Shelford 5051 is essentially the Portico 5051 EQ/Compressor module (first launched in late 2011 for use exclusively in the 5088 console), repackaged and relaunched for stand-alone use.

The 5051’s VCA compressor, like the EQ section, harks back to the past not only with Class–A gain blocks, but also mixes in gain–reduction techniques that have been developed over the years. From the modern age come elements from the highly regarded Portico II Master Buss Processor. The compressor’s threshold ranges from –30 to +20 dBu, its ratio can be set from 1.1:1 to 40:1, attack time can be continuously varied between 5 and 75 ms whilst the release time can be set anywhere from 100ms to 2.5s. Make-up gain can be set from –6 to +20 dB. This is a far cry from the vintage Neve 2254 compressor/limiter, with its fixed 5ms attack time, five fixed compression ratios (1.5:1, 2:1, 3:1, 4:1, 6:1) and its four release times (400ms, 800ms, 1.5s and an Auto range of 50ms to 5s). 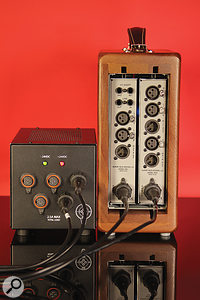 PSUs are available that can deliver power to five or 25 modules, while the channel strips themselves feature multiple outputs, including a link facility and side-chain insert for the 5051.The 5051 retains the classic feedback mode, in which a signal taken after the gain–reduction stage is used to trigger compression, giving a smoother, gentler, more traditional–sounding compression. However it also gains the more modern, feed–forward mode, in which the gain stage’s input signal is used to trigger compression. Feed–forward topology typically allows high ratios and tends to be faster, so it can have a more dramatic effect on the audio signal. Used in moderation, though, it can offer a more flexible and cleaner sound.

The 5051 includes another 12dB/octave high–pass filter (250Hz) in its side–chain, to reduce the possibility of low–frequency material inadvertently affecting gain reduction. A rear–panel link switch and associated quarter–inch jacks allow multiple 5051s to be chained together for stereo or multi-channel operation. Also at the rear, a side–chain insert loop allows you to plug in your own EQ for de–essing and so on.

The 5051’s rear panel also carries the two balanced XLR line inputs (only one of which can be active at any one time) and the compressor’s single balanced XLR output. These allow you, for example, to connect the output of the 5051 on one and a channel from your DAW to the other, without any need for repatching.

Worthy and wonderful though the improvements to the classic vintage designs in the EQ and compressor sections may be, it’s what they’ve done with the 1073 preamp in the 5052 mic preamp that interested me the most. First up, 48V phantom power is now selectable via a front–panel control. More importantly, there’s 72dB of discrete component, Class–A gain on the mic input — 66dB in 11 6dB steps and ±6dB on a trim control. The old rear–panel Hi/Lo impedance switch has disappeared and a line–level balanced XLR input has appeared. The chunky, square–cored input transformer sits post the mic/line selector and Phase (polarity) switches, and pre the trim control.

The high–pass filter turns up next, after which the signal takes two parallel paths. One runs straight out through an output balancing transformer to the Mic Out XLR, giving a completely clean direct out for recording or for feeding an external processor such as the 5051. The other path is only activated when the To EQ switch is engaged, routing the parallel signal through the EQ section and out, via another transformer–balanced XLR, to the 5052’s main output. This output–transformer stage features the Silk Red/Blue and Texture facilities from RND’s Portico II series, which allow you to mould the harmonic content and tonality of the output stage. With these controls active and sufficient drive on the output, the 5052 can deliver four to five percent THD, which is mostly second–order distortion and adds richness and body to tracks without overloading the output stage.

When the mic signal is not being routed to the EQ, the rear–panel balanced XLR EQ input is active. This enables you to run an external signal, such as a DAW return, into it to take advantage of the 5052’s EQ and Silk features.

In addition to the recordings I made, I still own the same old Guild guitar and a few of the same AKG microphones that I used with both vintage Neve 80-series consoles all those years ago. Listening to that guitar through the Shelford 5052 was an interesting experience. The basic character of those old Neves was still evident: the clarity in the high end, the warmth, the scale, the sheer ‘size’ of the sound was there, although I felt a definite sense of increased overall detail. Being able to trim the preamp gain with 1dB precision was an added luxury — although I don’t remember ever being phased by the 5dB steps in the old modules! As it was back in the day, in a mix situation the basic sound of the guitar recorded flat needed cutting back a bit to leave room in the spectrum for other instruments, and judicious use of the HPF and EQ did a perfect job of sitting the guitar into an appropriate spectral space.

With the 5052 EQ in circuit, I had the chance to experiment with the Silk and Texture controls. The Silk function reduces the negative feedback on the output transformer, adding harmonic content to the output signal as Texture increases and negative feedback decreases. With the Silk switch shining red, the saturation in the mid and high frequencies is accentuated, whilst in its blue state, the lower frequencies’ saturation is increased. The amount of saturation depends on how hard the output transformer is being driven. Juggling Silk colour, the Texture control and the drive into the output transformer gave me results ranging from great to fabulous. Silk is a very addictive addition and I could get very used to over–using it on any source.

I’ve not had the opportunity to work with a vintage Neve compressor, so I have no idea how the 5051’s compressor would measure up against one, but I can say that the 5051 contains a very fine compressor. This was the first time that I have had the opportunity to compare feedback and feedforward compression back to back on a single outboard processor, and to really get to grips with the different responses.

The Rupert Neve Designs 5051 and 5052 are two of the most artistically inspiring pieces of audio gear that I’ve heard in many a year. The nature of the sound that they produce takes me right back to my early experience on 1970s Neve consoles but adds a little something that I don’t remember from back then. Everything that contributes to the classic sound of a Neve console is in there — transformers, Class–A circuitry, inductors — and, to my ears, a modern layer of detail has been added that illuminates proceedings.

Although the 5051 and 5052 take their inspiration from vintage designs, they aren’t clones in any way, shape or form. Perhaps I’m being fanciful, but I have the feeling that the 5052 sounds the way that the Neve 1073 was always capable of sounding, or perhaps it’s just that Rupert Neve and his engineering team have reached a design pinnacle after all these years of research and effort. Either way it doesn’t matter, the Shelford Series 5052 is simply a superb microphone preamp and EQ combination.

I have a slight worry that the Shelford Series 5051 might be in danger of being overshadowed by its stablemate. That would be a real pity, as the 5051 has an enormous amount to offer artistically, both in tracking and in mixdown. Pairing it with the 5052 produces a complete and flexible modern vintage channel strip that is ideal for the DAW environment and that offers good value, despite being priced towards the top end of the market.

Audition these at your credit card’s peril, but you really should take a listen!

If you’re a Neve aficionado, then doubtless only the AMS Neve recreation of the 1073 mic pre/EQ and the 2264 compressor/limiter will do. By the time that you’ve paid for those and bought a rack to put them in, you’ll have spent considerably more than the cost of a 5051, 5052, PSU and the wooden two–bay rack. If you’re looking for an alternative mic pre/EQ/compressor combination the Manley VoxBox and the Retro Instruments Powerstrip would probably come into play, as would RND’s own Portico II Channel. All these would leave you with some change, although you’d have to do without the Shelford–series sound.

The Shelford Series 5051 and 5052 take inspiration from the early designs that Rupert Neve developed back in the days when his company was based in his home in Little Shelford, near Cambridge. Building on this legacy, RND engineers have developed two superb modules that bring the classic Neve sound right up to date and, taken together, form a complete and flexible modern vintage channel strip that is ideal for today’s DAW environment.