Royer Labs have created the world's only stereo ribbon microphone that has active, valve‑powered electronics. So what does it have to offer that conventional ribbon mics don't? 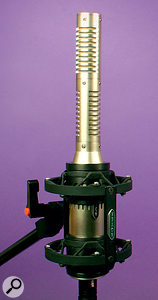 There's been a very noticeable resurgence in companies making ribbon microphones over the last year or two, but American manufacturers Royer have been producing very impressive‑sounding ribbons for over a decade, and have a strong band of supportive users. Their first product was the R121, a straightforward and relatively robust general‑purpose ribbon mic. This was followed by the R122, which had the same transducer, but with phantom-powered, solid-state, active electronics to provide a stronger output level. This meant it was better able to drive long cable runs, and had slightly improved transient and low-end responses. A little later again, the R122V was released, with valve‑based electronics powered from an external unit, for those who appreciate the slightly richer and warmer sound character this technology can bestow.

For stereo applications Royer neatly combined a pair of R121 transducers, mounted at 90 degrees to each other, into a single body to produce a true 'Blumlein Pair' microphone that could be used in X-Y or M/S configurations. As with the R121 variants, Royer also produced a phantom‑powered, solid‑state derivative, this time called the SF24, and have recently completed the set with a new valve‑based version. Called — yes, you've guessed it — the SF24V, it's the world's first stereo valve ribbon mic, and the subject of this review.

The SF24V is a handsome but subtle microphone, measuring 270mm long and 25mm in diameter over most of its length, but expanding to 39mm for the base section, which houses the amplifier circuitry. It weighs a hefty 572g and the review model was finished in a dull satin nickel, but a black chrome alternative is also available, as is an 18ct gold version for the extremely well heeled! It's supplied in a lockable aluminium flightcase, with the microphone supported inside its own wooden box, complete with velvet mic cover. The power‑supply unit and mains and mic cables are also included, with a dedicated cable compartment, as is a Rycote Softie windshield and the bespoke and elegant RSM24 suspension mount. Although the shockmount came without a 3/8‑inch thread adaptor, it does have two thoughtful slotted guides to ensure accurate alignment of the mic for X-Y and M/S orientations. The mic is protected by an impressive‑sounding lifetime warranty for the original owner, although this is constrained by a 10‑year warranty on the valves and a one‑year warranty on the ribbon elements. A very detailed and well‑written 22‑page manual is included, and gives careful explanations about how to get the best out of the mic and how to look after it properly.

The two 1.8‑micron aluminium ribbons are thinner than the ribbons used in the R121 mics, and are placed one above the other in non‑rotatable capsules, mounted at 90 degrees to each other and offset from the central badge by 45 degrees each side for instant X-Y stereo use. The capsules feed into the active electronic stage at the base of the mic, which employs a pair of tiny 5640 wire‑ended valves that measure only 9mm in diameter and 36mm long. These are, essentially, high‑quality versions of the EF732 pentode and are used in a triode configuration as cathode followers (basically just acting as impedance converters), with around a 135V anode voltage, and drive unbalanced outputs down the Mogami cable to the chunky power‑supply unit.

This power supply measures 130 x 265 x 65mm (whd) and is fitted with a seven‑pin XLR socket for the supplied mic cable, plus two three‑pin XLRs for the mic outputs at one end of the case. The opposite end carries an IEC mains socket with integrated voltage selector/fuse holder and an on‑off rocker switch. The internal construction of the power supply is to a high standard, and the case also houses a pair of relatively large (certainly far too big to fit in the microphone casing) Jensen audio output transformers. These not only balance the outputs from the unbalanced signals carried over the multi‑pin cable from the microphone itself, but also provide some useful step‑up voltage gain to increase the overall sensitivity to a healthy 12mV/Pa. 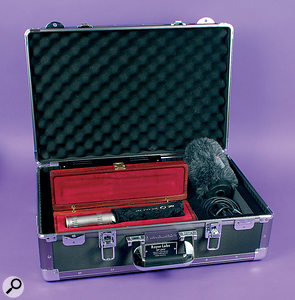 As you'd expect at this price, the Royer SF24V comes with a sturdy carry case, complete with a range of good accessories, including the power supply and cable, bespoke shockmount and Rycote windshield.

Connecting the SF24V is simple enough, although it's necessary to allow 10 minutes or so of 'warm‑up' time for everything to reach a stable operating condition. Thanks to its internal amplification stage, the SF24V provides a healthy output level and I connected it to my GML 8304 preamp, which is the cleanest and most transparent I have available. The quoted frequency response is 30Hz to 15kHz — pretty normal for a good ribbon — and the Royer doesn't disappoint. It has a lovely smooth top end, free from any hint of peaky resonance, and takes high‑end boost equalisation very well if you want to add more air and sparkle without sounding harsh. It also has a rich, weighty bottom end, especially if used close to the source for added proximity lift. Many ribbon mics are particularly prone to picking up hum radiated magnetically from power‑supply transformers — a common problem when miking electric guitar combos — but I found the SF24V to be very well behaved in this respect, and didn't encounter any problems during the review period.

I was fortunate enough to be able to compare the SF24V directly with a borrowed SF12 stereo ribbon, amplified by AEA's wonderful TRP preamplifier (which is designed specifically for ribbon mics), effectively allowing me to hear exactly what character the valves and transformers bring to the Royer ribbon party. I had to dial in 15dB more gain on the TRP than on the GML preamp to match the sensitivity differences between these two mics.

In comparing the two mics on challenging acoustic sources like a 12‑string acoustic guitar and assorted percussion instruments, the SF24V seemed to have a slight edge in terms of transient response, and was fractionally more airy. It came across as being very slightly faster and sharper, and this is probably down to a combination of ideal impedance loading close to the diaphragm, and the slightly more extended frequency response that results.

Stereo imaging — for those who like the precisely etched sound of coincident figure‑of‑eight mics — is superb: clear, accurate and immensely detailed. Off‑axis coloration is almost non‑existent, mostly because the level drops so quickly and dramatically into the deep side nulls. The front and rear pickup sounds identical, which is vital, of course, in a mic designed to serve optionally as an M/S pair (the single‑capsule variants have a deliberately different tonal character back and front). In situations where the rear pickup might be problematical, placing an SE Reflexion Filter or some other absorbent material behind the mic helps a lot.

The relatively compact size of the SF24V makes it easy to position horizontally above drum kits (it's great as an overhead pair), and above the strings in a grand piano for a delicious, bright piano sound. However, the power supply has to be placed near the mic stand — as it would with any valve mic — and that obviously impacts on the convenience of the mic to a degree in some situations.

I also had superb results placing three brass musicians each side in two narrow arcs about four feet away, to produce a full stereo brass section across a full image, with plenty of bite and detail, but with without any harshness — although it took a little care and effort in moving the individual players around to optimise the balance. I also used the supplied Rycote Softie windshield, which just slides easily over the top of the mic, for added protection against inadvertent wind‑blasts. It looks odd in a studio situation, but works brilliantly. With a maximum SPL capability of 130dB levels weren't a problem, provided I kept the trumpets and trombone four or five feet away! However, I did notice that the sound quality started to get noticeably richer and crunchier with very hot sound levels. I doubt this was down to the valve stages and suspect the output transformers were the cause, but it wasn't unpleasant at all — we all quite liked it, actually — but it is a noticeable departure from the relative transparency that the mic enjoys with more normal signal levels.

Having said that, the SF12 through the TRP preamp did have a great level of transparency overall, and was the more accurate in tonality. The SF24V tends to emphasise the mid-range a little more, and does sound brighter — although these are very subtle differences. If I was looking for an accurate stereo ribbon for orchestral and choral recording, and I had access to a really top‑notch preamp optimised for the job (like the various AEA offerings), then I'd pick the SF12. But for more general‑purpose applications where a hint of character would be beneficial, louder sound‑pressure levels might be encountered, and I wanted to use more familiar preamps, the SF24V would be the better option without doubt.

This is a lovely mic, beautifully finished and presented, with a wonderfully smooth but detailed sound character, and a precisely etched stereo sound stage. It's expensive, but well worth it in my opinion, because this is a really classy sounding mic that will deliver superb results wherever it is used.

As this is the world's first stereo ribbon valve mic, there aren't any directly comparable alternatives. However, Royer's own catalogue provides both passive and solid‑state versions of the same ribbon capsules which offer useful variations on the theme. The only other active stereo ribbon mic I'm aware of is the solid‑state Sontronics Apollo, which costs about a fifth as much as the Royer SF24V. Other passive stereo ribbons include the budget Cascade X15, and the huge high‑end AEA R88.

A stereo ribbon microphone with valve electronics to complete Royer's line-up of passive, solid‑state and thermionic ribbon microphones. Presented as a nicely packaged and equipped set, it's easy to use and relatively robust. The sound character is beautifully smooth but detailed, with a hint of mid-range richness that blossoms at high sound pressure levels.