Sherman have teamed up with Rodec to bring us more of their own special brand of filter mayhem. 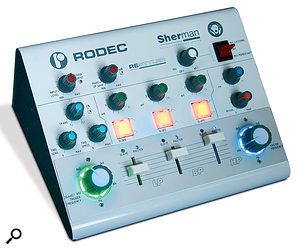 Lennon and McCartney, Simon and Garfunkel, Laurel and Hardy; I'm sure everyone has their own favourite musical partnership. Aiming to be yours, two respected Belgian companies — Rodec and Sherman — recently pooled their considerable talents for building DJ mixers and analogue filters. The result is the Rodec Sherman Restyler, an innovative design that combines DJ immediacy with the sound‑mangling prowess of genuine analogue filters. If you thought Belgium was only about beer and chocolate, it's rethink time...

First impressions are all about chunky ruggedness. The metal sloping panel is tilted at a friendly angle, while the controls reek of quality like my pants reek of concealed herbage. The two large knobs, with their LED collars, are especially eye‑catching, twin control points in a flexible filter design. For precision adjustment of master and slave filter frequencies, they inspire a confidence that never dissipates.

Three sliders determine the output levels of the low‑pass, band‑pass and high‑pass filters. Although their travel is short, at just 20mm, operation is smooth. Raising any slider above its centre detent boosts that filter's output considerably, while simultaneously reducing the range of audio modulation. Unusually, the modulation amount knobs have their zero position at the nine o'clock mark, with positive modulation found in a clockwise direction and negative anti‑clockwise. Both amplitude and frequency modulation are offered, their source being an envelope follower.

Unlike Sherman's more strange and freaky product, the Filterbank 2, there is no LFO, no voltage connectivity with modular synths, nor even MIDI. This isn't a complaint: the Restyler is a study in elegance precisely because of its control selection. Consistent with a role processing instruments or entire tracks, it is a stereo device. Audio inputs and outputs are via DJ‑friendly phono (RCA) connectors or quarter‑inch jacks. XLR inputs are provided but outputs are not, although the panel has been prepared for them (they are optional extras). Power is supplied from a screw‑in adaptor with line‑lump supply.

Apparently, two Restylers can be rack‑mounted side by side. I'd recommend keeping yours close by at all times, though: this is an analogue machine and it craves human contact! As a Sherman Filterbank 2 user, I found the Restyler's layout and control selection to be a massive step forward in ergonomics.

Visual feedback is high on the agenda, whether via the red input LED indicating signal overdrive or the flip‑flopping LEDs representing the triggering of the envelope follower. All are invaluable in cementing your relationship with the audio. An amber LED shows when signal output hits 0dB, and there are other, less conventional indicators too, such as the pumping blue main frequency control (illustrating filter modulation) and the initially enigmatic blue and green trigger LEDs. These predict whether the master (blue) or slave (green) filter knob should have the greatest effect on the signal at any moment. This is the only minor test of intuition, but it eventually makes sense when you realise they also paint an impression of filter output. LED brightness represents filter level and fluctuates according to modulation strength. In a live situation, this fluctuation is sure to be a welcome memory-jogger.

Three slope buttons nudge the filters from 12dB mode to a steeper, deeper 24dB mode. There are eight button combinations, and exploring the interactions between slopes, levels and twin cutoffs is a joyous way to appreciate more filter flavours than an MP can appreciate perks.

DJs don't relish brow‑furrowing demands on their concentration when mixing/performing — or so my keen observational skills suggest. They do, however, delight in making musical, meaningful tweaks whenever the mood takes them. I guess Rodec's influence is at work here, because familiarisation takes mere minutes. After that, it's just a matter of practising with a variety of source material.

The manual is a trifle vague, but other than alerting you to potentially high output levels, it is largely superfluous. Incidentally, I recommend a compressor/limiter directly after the Restyler in the audio chain. This is because the manual's warnings fall into that particular category of stuff ignored only by fools and governments: facts. Perhaps a noise gate could be useful too. If the Restyler is permanently patched into your audio chain, be aware that some of the filter combinations generate noticeable hiss.

In order to experience its impact on a selection of audio sources, the Restyler is ideally connected to either a mixer subgroup or pre‑fade effect sends. Of course, there's nothing to stop you directly processing synths, drum machines, CD players and so on. Having chosen the mixer option, I set modulation and resonance to zero and auditioned a few tracks in progress. Sweeping the mix control smoothly from dry to wet, I adjusted the level sliders, the filter frequency and resonance, and was pleasantly rewarded.

The tones are definitely Sherman but with extra clarity and warmth. I'd describe it as warmth you might associate with electric grills rather than roaring log fires; there's a tangible rawness that even ears honed on iPods shouldn't mistake for a plug‑in. If you boost the input level, a characteristic Sherman crunchy overdrive ensues.

When the band‑pass filter is in 12dB mode, or when either of the other filters are set to 24dB, you have two independently adjustable roll‑off points eager for manipulation. In the case of the band‑pass filter, its twin peaks hint at David Lynch‑style other-worldliness. With increased resonance, or if the master filter is subjected to frequency modulation, the atmosphere turns decidedly edgy and brittle. Fortunately, no matter how strange it gets, a return to familiar tonality takes only a second. Dialling up 24dB low‑pass response requires engagement of just the low‑pass slider and its corresponding slope button. The resulting filter is a product of both master and slave frequency knobs operated in tandem. The beauty of this arrangement is that you can then introduce a smidgeon of high‑pass or band‑pass too, thus transporting your mix into a whole new space. And that's only for starters.

Remember I mentioned that the master and slave controls have rather attractive LED collars? When you click the middle slope button, you notice that the slave frequency collar (ordinarily green and blue) turns pure green. This is a reminder that when you make a 24dB band‑pass filter, access is reduced to a single cutoff peak. In this mode, the master frequency has sole jurisdiction, leaving the green knob tied to the envelope follower. Thanks to a hidden band‑pass filter, the envelope follower has the rare property of being specifically tuneable rather than acting on the whole mix. This feature is responsible for much of the Restyler's charm.

Triggering the envelope follower requires setting the appropriate sensitivity to incoming signals — ideally, so that the two trigger LEDs alternate. The range of detection is so large that it can clip, warping the symmetry of the envelope pulses. Boost level too high and the envelope detector can freeze, producing potentially interesting, if unpredictable, outcomes. Next, the trigger transition knob is your means to smoothly morph between modulation based on the contours of the input signal or squared on/off‑type transitions. Lastly, the speed control sets how fast triggering occurs. Set this very fast and frantic and repeated triggering, or even distortion, can result. Conversely, a slow response is a means of delaying the trigger — a useful starting point for offbeats and gaps.

Gaps and gating effects are generated by the modulation of individual filter amplitudes — a feature I've not met before. Since modulation is bipolar, you can shift bands of the mix in different directions, which can be pleasantly trippy, or nausea‑inducing at extreme depths. Applying filter FM to the master cutoff can release subtle or dramatic blips and zaps, a technique I successfully employed to liven up a track's flabby 808 kick.

Once I started tweaking, it was damn near impossible to stop. Before we finish, I'll offer some brief examples as further illustrations of the Restyler's versatility. Let's look at how you'd chop a few holes in an incessant bass line. First, tune the envelope follower to trigger on the bass. This will be at around nine o'clock on the Slave/Trigger frequency knob. Adjust the envelope shape so that it's predominantly square and play with the low‑pass filter's amplitude modulation and the envelope follower's trigger speed. At this point you might experiment with fine‑tuning the trigger frequency, remembering, of course, that you are free to trigger on any part of the audio spectrum. We've seen that slow triggers will delay the envelope follower, so set the value almost at minimum to produce multiple gaps. Then flip between the dense and the sparse mix with the momentary switch, adjusting the filter levels to taste.

During performance, you are constantly drawn to the three‑way rocker switch to flip between wet, dry and a brief blast of wetness (at my age, such phrases can have scary connotations). This switch is a treat for instantly engaging filter operation, and with practice you can rapidly flip while spinning those generously proportioned knobs. If you require filter sweeps that travel in one direction only, this is a nippy and perhaps unique way to achieve them. Techniques of this sort — and better — will occur to Restyler players everywhere, I'm sure.

This isn't the world's first stereo multi‑mode filter with an envelope follower. Where the Restyler shines is in how wondrously its elements combine. From the outset, I felt more like I was encountering an instrument than an effects box; an instrument that's intuitive, responsive and deep, yet free of clutter. Don't get me wrong — in unskilled or insensitive hands, it could be a lethal tool, and whether you consider yourself skilled or not, a limiter should be part of the signal chain to curb more intense outbursts.

Restyling is more than mere filtering. Its scope covers everything from tastefully altering the mix of a finished track to roughly deconstructing it. While it's true that dynamic material yields the best results from the envelope follower, you needn't get fixated by pumping filters, gating or beat chomping. Even without modulation, you have lightning‑fast access to a wealth of analogue tones, adding colour to the greyest of sources. Even the simple act of boosting the input signal into distortion produces a warm and useable overdrive, considerably less 'rippy' than that of the Filterbank 2.

It's tempting to make comparisons with that other Sherman product. I've had one for eight years and it still retains the potential to surprise and delight — or confuse and intimidate. Yet even if I owned the (rather expensive) stereo version, I wouldn't dare stand in front of an audience and attempt the tricks in the Restyler's repertoire. The new kid is simply faster, more civilised and more co‑operative: the Sherman you can take anywhere.

When considering an analogue filter for DJ/live use, Xone's VF1 is a more conventional, yet worthy, choice. Featuring stereo operation, an envelope follower and an LFO, plus MIDI and tube distortion, it nonetheless doesn't compete in terms of depth. Although warm and imparting less colouration, the VF1 lacks the smooth mixability of the Restyler's filters and doesn't possess the capacity to fine‑tune the envelope follower's response and perform the kind of remix work the Restyler begs to be involved in.

Another possible alternative is Vermona's Cross Filter, a far simpler machine altogether. It even lacks an envelope follower but is still designed for DJ filtering action with its crossfader and warm, Moog-y dual filters.

The Restyler offers broadly traditional filter effects such as sweeps and resonant wibbles along with gating, chopping, weird beat‑mangling and more. Whether you're a performing DJ or undertaking remix work, whether mastering or even processing individual instruments, this ingenious white box delivers Sherman musicality that you don't have to be a boffin to enjoy.