The latest Notion scoring package offers upgraded orchestral samples, VST compatibility and a host of new features. Will it score highly with the musical community? 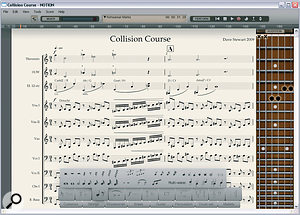 Notion, the innovative scoring‑plus‑playback package created by US company Virtuosoworks, has been on the scene for around five years. The inclusion of an orchestral sound library recorded by the London Symphony Orchestra is a big selling point, enabling composers to hear their musical visions rendered by top players. Since its release in 2005, Virtuosoworks have changed their name to Notion Music and the program has been rebuilt from scratch, culminating in the release of the radically upgraded Notion 3. (Read the SOS review of the original program at /sos/oct06/articles/virtuosoworks.htm).

An unhelpful quirk of the original software — not being able to hear samples as you recorded parts — has now been fixed. Another important, and very welcome, new feature is that Notion can now run VST software instruments and samplers such as Kontakt, EastWest Play, Vienna Instruments, Vienna Ensemble, Modartt Pianoteq and so forth. The sonic and musical advantages are endless: as well as hearing the LSO playing your scores, you can add instruments from your favourite sound libraries. To facilitate this, Notion 3 provides presets for EWQL Symphonic Orchestra (Platinum Play Edition), Garritan Personal Orchestra (ARIA), Miroslav Philharmonik and Vienna Symphonic Library's Special Edition and SE Plus collections.

Notion 3 will also run third‑party effects such as IK Multimedia's CSR Hall Reverb and Amplitube X‑Gear amp simulator (both bundled with the program), and indeed any other VST effects installed on your computer. A new, fully featured mixer page incorporates a nifty 'power pan' control for each channel, which lets you adjust stereo width as well as placement. The program now supports ReWire, enabling audio and MIDI to be freely streamed between different programs on the same computer. This new functionality means that, in the immortal words of TV character Arthur Daley, "the world's your lobster”: the program has become more connected, and its compatibility with other popular tools of the trade should help ensure its survival in the marketplace. 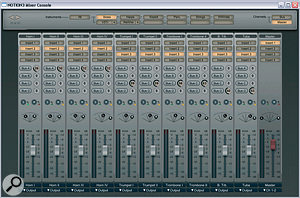 The new‑look mixing console incorporates an interesting 'power pan' control, which can adjust width as well as placement in the stereo field.

In my October 2006 review, I sung the praises of Notion's string ensembles but criticised some solo instruments. The solo trumpet, in particular, was so off the money that it sounded to me like an oboe. The sound library has now been completely reprogrammed and features close‑miked stereo samples from the original sessions throughout; this drier presentation allows the character of the instruments to come through and also makes it more feasible for users to add their own reverb effects. As a result, I can report that the offending solo instruments are much improved and the trumpet now sounds like the real thing!

Notion 3 retains its original samples along with the reprogrammed ones, which is a boon to users who want to continue working on earlier projects. The new and old sample sets total 15GB. Former add‑on instruments (solo strings, euphonium, piccolo clarinet, contrabassoon, marimba, vibraphone and extra hand percussion) are now included in the core library. Played with soft and hard mallets at different motor speeds, the vibes also offer some cool, ethereal, bowed samples, a sign that the library has moved beyond the basics into the realm of more adventurous articulations.

New rock and jazz instruments include playable Clavinet and Rhodes keyboards, sampled, as far as I can tell, at two and five dynamics respectively. Electric and acoustic guitars, bass guitar, upright bass and drum kit have all been very decently multisampled, and if you want to rock out, the Amplitube X‑Gear plug‑in will transform the clean guitar into a raging, overdriven tribute to the Gods of Metal. A library of pre‑programmed rock, jazz, funk, Latin and Afro‑Cuban drum kit patterns is also provided. I enjoyed the jazz brush hits, especially the beautifully resonant and sustaining brush toms.

Some of the instruments listed in the Notion 2 menu (vocals, harpsichord, three of the sax family and some hand percussion) don't yet exist. However, these missing sounds will be available (along with non‑orchestral items such as banjo, mandolin and so on) as expansion kits at some point, costing as little as $1.99 apiece.

To make Notion 3's strings switch on the fly between arco, pizzicato, tremolo and trills, all you have to do is grab those markings from a palette and drop them in the score at the right place, which is a lot easier than having to program your own keyswitches. Thanks to the included orchestral presets, VST Instruments such as Vienna Instruments and EastWest Play also faithfully follow these instructions. Fancier strings articulations such as sul ponticello, harmonics, col legno, Bartok 'snap' pizzicato and interval‑based tremolo are currently missing, but should be available in an expansion kit before long.

Working with third‑party instruments in Notion 3 is a cinch: the score setup page shows a list of your installed VST Instruments, and clicking on one of them assigns it to a score staff. I found it very handy to be able to launch Native Instruments' Kontakt sampler and add bagpipes, yak mating calls, Lithuanian eunuchs' choir and ukulele to my latest composition, though listeners might not be quite so thrilled. For some reason, Notion 3 failed to automatically detect EastWest's Play sound engine on my system; to rectify that, all I had to do was click on the VST Manager tab, browse to the folder containing the Play DLL file, highlight it and hit 'enable', after which all was well.

Major orchestral libraries' multi‑articulation setups are heavy on RAM consumption: VSL Special Edition's solo viola matrix, for example, requires over a gigabyte of RAM. I feared the worst when loading Notion 3's full orchestra template, but was pleasantly surprised to observe that, due to some nifty disk‑streaming techniques, it uses little more than 200MB of RAM.

Notion 3 now supports an unlimited number of staves, and staves can display up to four voices, sufficient for the most intricate contrapuntal compositions. The transposing issues I identified in my 2006 review have been ironed out, and you can now view your scores in concert pitch or old‑school style, with instruments transposed into their respective keys. A wrongly placed note may now be dragged into its correct position (previously you had to delete and re‑input it). However, the mouse drag‑and‑drop facility only works on single events.

A simple‑to‑use transpose function allows you to lasso multiple notes and/or chords and shift them up or down in pitch, with a choice of chromatic or diatonic (meaning 'in a key') transposition. The former mirrors how a MIDI sequencer behaves, while the latter method simply shifts notes up and down the scale — for example, in the key of D-major, diatonically transposing the notes D‑E‑F#‑G up a step gives you E‑F#‑G‑A. An alternative method for multiple‑event transposition is to highlight a group of notes and use the up and down 'arrow' cursor keys. This works fine with melody lines, but when applied to some simple triads, the first chord's pitches are consistently jumbled. The makers say this is a bug, which they will fix in an update.

The program is not good at guessing the correct enharmonic 'spelling' of notes when no key signature is specified. When I wrote in a standard open E-major guitar chord on the fretboard, it notated the major-third interval as an Ab rather than a G#. (Sounds the same, but looks all wrong on paper.) However, you can quickly 'respell' errant flats and sharps by pressing Shift‑E: this places an 'enharmonic tool' on your cursor, enabling you to change accidentals simply by clicking on them. By a similar process, you can also edit note durations (for example, change a quarter‑note passage to eighth notes) without the hassle of re‑inputting the notes.

A great new feature is the big, rather handsome‑looking on‑screen fretboard first seen in Notion Music's Progression guitar notation program (see /sos/jul08/articles/progression.htm). It's brilliant, allowing you to place dots, crosses or 'open string' symbols directly onto the strings, then hear the chord played back with a built‑in, impressively realistic fast strum. The program also contains an extensive library of guitar chord shapes for every imaginable type of chord, in all 12 keys. All in all, this is a highly flexible, efficient and fun system for fretted instrument notation.

Notion 3 offers two music fonts: a simple, classic engraver's style (which, in my opinion, is a big improvement on the original 'Stava' typeface), and a jazzy, Real Book‑style quasi‑handwritten font. Both are clear and easy to read. For lyrics, titles and so forth, the only option is a Times Romanesque serif font. At the moment there's no way of altering note spacing, nor can you change the size of individual note-heads, which would be useful for notating descant lines, optional harmony parts and the like. Notion Music assure me that they plan to address these issues, and that the user note‑spacing facility is already present in the code and "not far from being implemented”.

I found that the original program made it impossible to notate drum parts properly, so was pleased to see that the formerly sketchy drum notation has been replaced by a complete set of percussion note-heads, crosses and so on. The only remaining limitations I experienced were being unable to change the vertical spacing between staves, and the lack of user‑sizeable 'mini‑slur‑marks' that don't automatically connect to a target note. Avant‑garde composers will probably miss a few other arcane symbols and squiggles, but the symbol palette as it stands will meet the requirements of most of the music community.

As is the norm with virtual instruments nowadays, Notion 3's internal samples are proprietary and can't be loaded into external players. It's also worth noting that you can't use Notion 3 as a stand‑alone, multitimbral sound module — it will play incoming MIDI one instrument at a time, depending on which staff is selected, but to hear all instruments playing together, the score must reside inside Notion.

However, if your goal is simply to produce an accurate and readable score, accompanied by a musically faithful audio rendition, such technical limitations are irrelevant. Notion handles score creation, part extraction and full orchestral playback very well, and, in addition, its new virtual‑instrument compatibility opens the door to an unlimited sound world. Having seen the long list of improvements achieved over the last few years, I can now unreservedly recommend this program as an efficient and affordable notation package.

The obvious alternatives are Sibelius and MakeMusic's Finale. Both are highly sophisticated and perhaps more extensively featured notation packages, with versatile playback options, but both are also a lot more expensive than Notion.

Notion 3 is a mature, well‑thought‑out program with a good, comprehensive sound library, designed from the ground up to notate and play back music. Although it doesn't work quite like a sequencer, you can record parts in real time, editing is quick and easy, and the resulting scores are of a professional standard. Being able to bring your favourite sound libraries on board for playback is a huge bonus, and at this price the package looks a very good deal indeed.