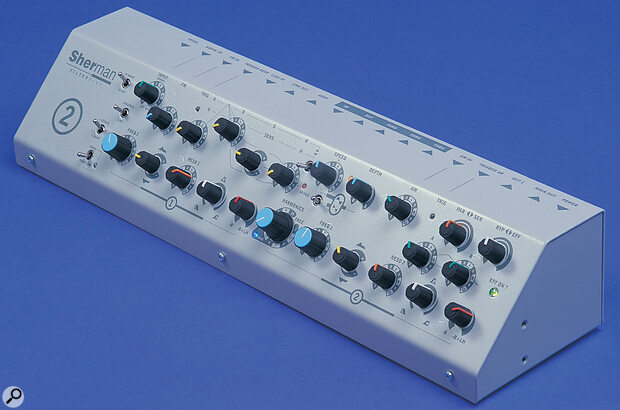 Four years on from its launch, Sherman have updated their innovative Filterbank analogue filter unit. Paul Nagle checks out all the weird and wonderful new features.

After four years of production, Belgian company Sherman have ended the run of their original Filterbank. This unit, reviewed back in SOS April 1997, comprised two multi‑mode 12dB/octave VCFs, two envelope generators (ADSR and AR), an envelope follower, an LFO and two VCAs — effectively a patchable analogue synthesizer without any oscillators. Since the launch of the Filterbank, Sherman have been able to re‑examine its design, consider user comments and make various tweaks and enhancements, the most obvious of which are five new switches, two LEDs and a pedal input.

The Filterbank 2's casing has retained its predecessor's unusual shape, designed for rackmounting at a variety of angles, though its colouring has changed from the original's cream colour to a pale, faintly metallic grey. The unit still requires 15V AC to power it, which is provided via a two‑pronged Euro‑type connector on the rear panel and a separate adaptor (urgh!).

The rear panel features no fewer than 11 quarter‑inch jack sockets, providing not only signal input and output, but also a host of control possibilities. The new pedal input will be of most interest to previous Filterbank users, and this accepts a normal sustain‑type pedal. Currently the pedal can only act as an effect bypass switch, though Sherman are apparently bringing out their own pedal which promises foot control of the first filter's cutoff frequency as well.

The rest of the control sockets are pretty much the same as they were on the original model. FM In and AM In jacks allow external signals to control the VCF centre‑frequencies and the VCA levels, and there are trigger inputs for both the envelope generators. Link In and Link Out jacks allow multiple Filterbanks to be used in tandem — though this would perhaps be most useful for working with stereo material, the manual also has some helpful hints on configurations involving more than two units. Finally, the ADSR Out socket allows you to control other units from the internal ADSR envelope generator. It does seem a shame that Sherman didn't also include an LFO output.

The audio socketry amounts to Signal In, Out 1 and Main Out jacks. Normally, the main output carries the combined signal from the two filters, but if you plug a lead into "Out1", Filter 1 can be sluiced off seperately. A set of MIDI sockets complete the back panel, providing In, Out and three Thrus. The MIDI implementation remains as limited as it was on the original Filterbank, though I didn't really find myself feeling impoverished by this. There's certainly enough control for all sorts of filtered sweeping and gate chopping, and it's nice that the two envelopes generate MIDI notes — you could pass an audio drum track through the Filterbank 2 and use the resultant MIDI notes to trigger replacement sounds from your sampler, for example.

An LFO sawtooth waveform and envelope triggering mode are accessed from a new three‑position switch.

One of the appeals of the original Filterbank was that its filter configuration was continuously variable between serial and parallel operation, and that each of the filters could be smoothly adjusted between low‑pass, band‑pass and high‑pass operation. Because the filters could be sync'ed at a variety of intervals, you could produce 24dB/octave slopes if you wish, as well as notch filters and some more unusual curves too. The onboard LFO could affect the cutoff frequency of each filter identically or in opposite phase — and with a very wide range of rates, it was more than adequate for anything from William Orbit sweeps to pseudo‑ring modulation effects. (For more detail on how the individual rotary controls work, check out the original review on the SOS website.)

All this functionality has been retained on the Filterbank 2, keeping the unit's essential character intact, albeit with updated circuitry which improves the signal‑to‑noise performance, increases the range of resonance settings for Filter 2, and increases the envelope speeds by 40 percent. Most of the new functionality comes courtesy of the five new front‑panel switches. The first of these is a Hi Boost/Hi Cut switch which not only tweaks the high‑frequency content of the input signal, but also alters the sensitivity of the input making it a reasonably effective method of coarse gain control. Hi Boost, especially, seems to add extra energy to a signal, which is ideal for piercing solos.

The second new switch gives greater flexibility in responding to different types of signal input. The Sensitrig setting decreases the threshold for envelope triggering and the Limit setting prevents the nastier artifacts of self‑oscillation when the input stage is heavily overdriven. This is certainly necessary if you set the preamp control beyond the detented centre point, as thick, analogue distortion is always lurking there, eager to pounce — in fact, even before the knob's centre position, I found I was frequently walking a thin line between providing enough signal to trigger the onboard envelopes and lurching into mild distortion, but analogue overdrive is the very essence of the Sherman sound, and I for one liked it a lot.

The third switch transposes the filter range, either up an octave or up a fifth. This latter mode has what Sherman describe as a 'dirty character', which works very successfully on monophonic signals with a little filter‑frequency modulation — suffice to say I've experienced more 'dirty characters' since the Filterbank 2 arrived than a News Of The World hack at a swingers' convention!

Another switch, probably the most important addition of all, activates the two tracking modes, both of which tune the second filter to the pitch of the incoming signal. (Filter 1 can also be slaved to it using the Harmonics control.) For normal use, Track mode will be most suitable, but for the most speaker‑wobbling basses the Track Low setting will be more appropriate. A new white LED is positioned next to this switch to indicate when the tracking system is locked on. Like many pitch followers, the results when working with either of the tracking modes depend hugely on the quality of the input and the range over which you try to use it. Playing cleanly articulated notes on a synth gave fairly (though never fully) controlled results, and added a sizzling presence or an ominous rumble depending on the filter settings.

The last of the new switches offers a new sawtooth LFO waveform and a means to retrigger the LFO via the AR generator. I smiled at the manual addendum sheet, which suggested "pumping grooves were an unavoidable result" of this retrigger function, but it certainly is capable of some interesting effects, especially on drum sounds when you've got the LFO running at a low speed. 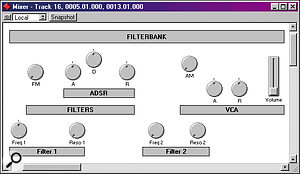 The original Filterbank was far more than just a couple of filters in a box, and its successor features several useful improvements, such as the pedal input and the pitch follower. The Filterbank 2 shines as an analogue distortion unit or exciter, and if you consider the number of features included, the interfacing possibilities, the MIDI control and its general organic quality, you can see this unit finding a home in many studios — as its predecessor did before it.

The only problem I can see is that you do need to spend some time with one of these to fall in love with it — with its numerous controls, flexible patching and MIDI functionality, there's a lot to digest. This isn't helped by the fact that the front panel appears at first glance to be a little disorganised and non‑intuitive and, even with familiarity, I can't say I actually like it. For example, the input level knob is far too close to the FM amount, resulting in unwanted adjustments, and the ADSR knobs are confusingly not in a straight line.

And the learning curve isn't eased by the same ill‑named "Abusers' manual" that Chris Carter disliked so much four years ago. Rather than describe each function, it is structured as a series of exercises to familiarise you with Filterbank operation. These exercises take time — time you might not have under normal 'shop demo' conditions. I diligently plodded through them all, and I probably understand the unit better because of it, but I am acutely aware that many would‑be customers won't have the time to do this. What's more, the tutorials haven't been updated to reflect the new model — unless all the new switches are set to their centre positions, the exercises won't necessarily work as intended.

However, despite these small complaints, even an old fogey like myself wasn't immune to the Filterbank 2's rough charms. In the first few seconds after plugging it in for the first time, I gave my monitors more exercise than they've had in years, as cat‑worrying highs and heart‑stopping bass erupted from them. The tracking modes in particular could justify buying one of these boxes, if you find that you have trouble making your solos cut through.

When I read the review of the original Filterbank I put off checking it out, reasoning that I could spend the cash on yet more synths instead. Now I see I missed a chance to make what I already had sound a little different, to breathe life into some of my virtual analogues, to dirty up some of my bland drum grooves — there's serious cutting, tearing mayhem to be had for anyone even remotely resembling a Prodigy wannabe! Find a shop with a Filterbank 2, try it out for as long as you can, and you just might find that it will be the energy bolt you've been looking for in this increasingly tame world.

Sherman's website already provides both a Steinberg Cubase mixer map and a Cakewalk studioware panel for external control of the Filterbank 2. However, Sherman have informed us that a number of other control templates will be available soon, including an Emagic Logic Environment setup and patches for the Kenton Control Freak and Doepfer Pocket Control hardware controllers. Mike Seniorinformation £ £499 including VAT.

A filter box which wants to be an overdrive unit, a semi‑modular synth without the oscillator, a MIDI‑controllable gate and a drum‑loop energiser as well. You'll never find a plug‑in with this much character and you'll never run out of things to process through it. The only thing you'll ask yourself is whether one channel is enough.