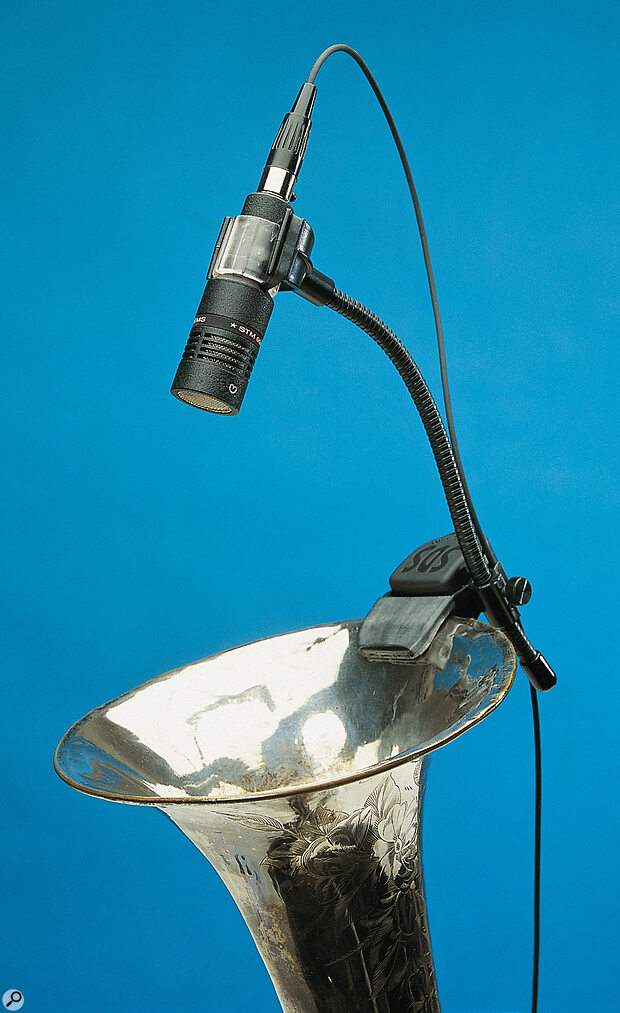 Trying to keep a microphone in the optimum position on an acoustic instrument is often difficult, especially when recording brass, woodwind and string instruments, where the musician is likely to move about during the performance. SD Systems, a Dutch company based in Amsterdam, have therefore developed their new STM99 modular microphone system specifically to meet this challenge.

The new design comprises a medium‑sized condenser microphone (with interchangeable capsules) together with five different mounting accessories which allow it to be fitted onto pretty much any brass, woodwind or string instrument. The CL89B mount holds the microphone in a suspension cradle atop a small tripod, the rubberised legs of which clip to the bell of a wind instrument. The CLGS mounts a similar cradle on a gooseneck with a clamp for attaching to some appropriate part of the instrument, and the CLDR is a similar design optimised for mounting on drums. The CLBS mounts the suspension cradle directly on the bridge of a double bass or cello, Finally, the CLSTD allows you to mount the mic on a conventional stand for miking static sources.

A detachable two‑metre cable links the capsule's head amp to the remote preamplifier body which provides the XLR output to your mixer. There is no clip provided for securing the preamplifier to a mic stand or clothing.

The three capsules available provide cardioid (SCC), omnidirectional (SCO) and supercardioid (SCH) polar patterns, and all require phantom power of 12‑52V. Since the microphone is always likely to be used close in to the source, the specifications are necessarily at odds with most general purpose microphones. There is therefore greater emphasis on high maximum SPL handling (all three capsules handle at least 131dBSPL at 0.5 percent THD) than on low self noise or high output level.

The published frequency‑response plots for all three capsules seem substantially flat between 30Hz and 20kHz, with the exception that the omnidirectional capsule exhibits a noticeable peak between 5kHz and 10kHz, and the supercardioid has a tendency to roll off gently from 5kHz.

I was supplied with the SCC cardioid capsule and the CLGS gooseneck clamp. The mounting was nicely engineered and extremely versatile. The neck could be bent into a 'U' shape, with the tightest radius being around 3cm, and was sufficiently stiff to remain where it was placed — vital when small changes in positioning can have pronounced effects on tonal balance. The neck's length and the orientation of the suspension cradle were fully adjustable, while the clamp's spring‑loaded jaws were extremely strong and rubber‑sleeved, providing a firm grip without the risk of damaging the instrument. I tried the mic fitted to a clarinet, as well as trying it on top of a Leslie cabinet, and the suspension did a good job of minimising the transfer of mechanical vibration in both cases. However, a windshield was required when working with the Leslie — none is provided, but the capsule's standard size allowed me to use one from another microphone.

The microphone proved to be quiet enough for any normal use, with more than adequate output level and a well‑balanced sound. The cardioid polar pattern and close placement kept spill pickup to the bare minimum — this could make life a lot easier both in the studio and on stage. Once a sweet spot was found, the mounting ensured that even the performer's most energetic gyrations made little impact on the recorded sound.

The STM99 is not cheap, but it is well‑designed and is certainly of studio quality. If you want to record instruments without inhibiting the performer's freedom of movement, this could be the solution you have been looking for. Hugh Robjohns