Rycote's resilient plastic lyre suspension system quickly established itself as a 'better mousetrap' microphone shockmount technology, due to its far superior isolation when compared with traditional wire‑frame and elastic mounts. The high‑tech thermoplastic they use is also incredibly tough and resists being broken or deformed, making it suitable for day‑to‑day studio, broadcast or sound‑for‑film work. 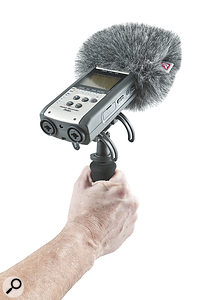 Their new Portable Audio Recording Kit utilises both Rycote's shockmount technology and the company's expertise in designing those familiar hairy windshields that are often seen on outside broadcast and film microphones. It's intended for use with a range of portable solid‑state recorders, and Rycote actually make different versions for specific models including those by Olympus, Sony and Zoom, taking account of the weight and dimensions of the different models.

The mount itself has a standard camera thread on top, and this screws into the matching threaded sockets fitted to many portable solid‑state recorders — though bear in mind that there are still one or two models that don't have a mounting point. I had no problem fitting the review model to my Olympus LS5 stereo recorder.

A dual‑lyre suspension isolates the top of the mount from the base, which offers a choice of mounting options: unscrew the hot‑shoe adaptor and you get a 3/8‑inch thread to fit a standard European mic stand or boom pole, and with the adaptor fitted you can either screw the whole affair onto a tripod via a quarter‑inch female thread in the base, or use the integral mounting plate to slide it into the shoe of a camera. The whole of the base is also fixed on a swivel joint, so that the recorder can be tilted up or down as needed.

The kit also includes a padded short handle, which can be screwed into the base of the mount for hand‑held use, and a small, fluffy Rycote windshield. The latter is elasticated to fit over the mic section of most small recorders. The review model was a little loose on my rather slimline Olympus, but it would be a simple matter to stitch a couple of tucks into the open end to tighten it. It's also possible to buy the shockmount, handle and windshield separately.

Whenever I've used a portable recorder, I've always had problems finding places to put it that wouldn't be affected by vibration, especially when recording my own band's gigs. The Rycote Portable Audio Recording Kit offers better isolation than you'd get from a traditional mount, making it a professional but affordable solution to that problem. Just stick it on top of a Gorilla Pod (a lightweight, flexible plastic tripod) for example, and you can set up your recorder almost anywhere. The wind sock means you can work outdoors with far less risk of wind noise, while the camera‑shoe option is perfect if you want to capture high‑quality audio while shooting video. Brilliant!  Paul White