Q. Do I need a shockmount? 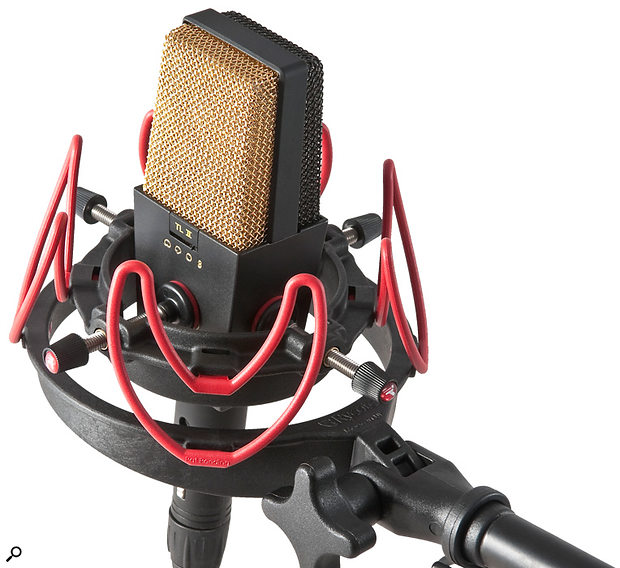 If your mic lacks a shockmount, or came with one of poor quality, it might be worth investing in a new one, such as the Rycote InVision model pictured here.

I would just like to ask if it’s important to use shockmounts on my microphones and how effective they are?

Technical Editor Hugh Robjohns replies: I think this is one of those ‘it depends’ answers. If the mic is not subjected to external mechanical vibration then shockmounting is unnecessary, clearly. And in many project-studio situations there won’t be any significant mechanical vibrations to worry about. Moreover, if what you’re recording has no relevant low-frequency content you can use a steep (18dB per octave) high-pass filter to remove any unwanted LF rumbles anyway. So again, no shockmount is necessary in that kind of situation.

However, as a rule of thumb, the larger the diaphragm the more susceptible the mic will tend to be to mechanical rumbles (think long ribbons and large-diaphragm capacitor mics). Also, the more directional the polar pattern the more susceptible the mic will be to LF nasties, too, so figure-of-eight, hypercardioid, and cardioid, in that order. Subcardioids and omnis are far less prone to picking up unwanted mechanical vibrations. The reason for these trends is that large diaphragms generally, and the diaphragms of directional mics, tend to operate with relatively low tensions, making them far more prone to wobbling about in response to external vibration.

It’s often recommended to always use a shockmount, and I do generally do use shockmounts everywhere, mainly because I have good ones to hand, so it would be a waste not to! But a poor or inappropriate shockmount can make the situation worse rather than better, so some caution is required. It may seem counterintuitive, but you may well get better results with no shockmount than when using a poor one!

A shockmount works as a mass-spring damping system, and is not too dissimilar to the suspension on a car. All systems of this kind have a resonant frequency, and above that frequency (about three times higher, in fact) the damping system will act to remove vibration very effectively. Below the resonance, though, it won’t, and at the resonance itself the system will actually tend to amplify the vibration! Consequently, to be genuinely effective, a shockmount system must be designed to have a resonant frequency somewhere below 6-8 Hz, in order to provide effective damping by the time useful audio information starts to appear around 20 or 30 Hz.

Lots of factors affect the resonant frequency of a mass-spring system, but for a given spring compliance the obvious variable in the context of a microphone shockmount is the mass of the microphone it’s being asked to support. Consequently a shockmount must be designed and specified to work with a specific microphone, or at least a narrow range of mic weights.

Sadly, the cheaper end of the mic market seems content to supply simple generic shockmounts, with no regard to optimising the complete system’s resonant frequency. The results are, therefore, somewhat unpredictable. This is especially true of the ‘cat’s-cradle’ style of shockmount for large-diaphragm capacitor mics, the weights of which can vary enormously.

I am a big fan of the Rycote InVision shockmounts (pictured) which I use in various models almost exclusively for all my small- and large-diaphragm mics. I’ve found these to be superbly effective, fundamentally because they’re designed properly; the compliance of the suspension Lyres in each model is adjusted through the manufacturing process to suit the weight of the specific microphone being supported, and the company website specifies different InVision models for different sizes and weights of mics. Inevitably, the InVision shockmounts are not pocket-money cheap, but they will last a lifetime and you’ll never have to replace a snapped elastic or rubber O-ring!

If you don’t have access to appropriate shockmounts, it’s always worth experimenting with a layer or two of carpet, or some furniture foam cubes, placed under the feet of your mic stand’s tripod legs. This should help to curtail the worst mechanical thumping of footsteps and the like from reaching the mic.

It’s always instructive to use a spectrum analyser (often provided as part of multi-band EQ plug-ins) to examine what’s going on below 40Hz on the mic signals, too. Ideally, there shouldn’t be anything there... so if you can see a lot of energy it will be worthwhile fitting a decent shockmount and/or applying a steep high-pass filter. (Bear in mind, too, that extreme LF signals can be generated by things other than direct mechanical vibration, such as drafts and air currents around the mics, and acoustic LF wavefronts from nearby machinery or traffic).