Sampled pop horns were popular during the '80s and '90s, but recently orchestral brass libraries have dominated the market, leaving those needing pop, rock, and jazz brass samples out in the cold. Big Fish Audio aim to raise the temperature of these poor shivering souls by releasing the defiantly pop-orientated First Call Horns. This 1.5GB library's dry studio acoustic can be sweetened by adding a splash of Kontakt 's built-in reverb. Most instruments come in a choice of solo or stereo section formats, the latter (which sound like unison duos) producing a lusher, broader sound than the mono solo instruments. None of the samples are looped.

Pop brass needs good saxophone samples, and Big Fish's baritone sax is the star of the show — big, honky, and in your face, perfect for dirty low-end riffs or for punctuating Tamla bass lines. The alto sax's intimate, breathy quiet notes are also particularly attractive. On the minus side, there's a big, jarringly obvious change in timbre between the alto and tenor saxes' quiet and loud notes, and the soprano and baritone instruments are single dynamic. However, being able to keyswitch instantly between vibrato and non-vibrato notes restores some expressive potential.

The solo trumpet's large array of attention-grabbing big-band mannerisms (long and short falls, 'doits', leery shakes, vicious razor-sharp staccato stabs, and so on) provides a stark contrast to the inhibited delivery of most orchestral players. The use of Harmon, cup, and plunger mutes takes us deeper into Miles/Louis Armstrong jazz territory. If you want subtlety, the mellow-sounding flugelhorn and stopped French horn employ a tasteful, understated vibrato, but if you don't, the trombone's vibrato notes are satisfyingly over the top. One nice, unexpected extra is the no-frills piccolo trumpet, which belts out some good, pure-sounding loud sustains.

The Improvs & Riffs section of the library is a big selling point, boasting over 1000 jazzy solo performances played by trumpet and trombone (with and without mutes), flugelhorn, soprano, and tenor sax. The blowing is fluid, free, inventive, and highly varied, featuring bebop-style lines, wasp-in-a-bottle note flurries, extended melodies, melancholic soft phrases, screaming high notes, and a few effects. No keys or tempos are listed, but with a lot of patience and a little retuning, this gigantic grab-bag of horn improvisations will yield great musical results.

First Call Horns ' instruments work together to create a realistic, versatile pop/rock brass-section sound. The samples are less well suited to replicating the subtle inflections, tonal detail, and smooth legato transitions of an expressive solo melody line — that requires a more forensic sampling approach. But if you're in the market for fat, powerful brass chord pads, swells, stabs, and falls, as well as a tremendous stock of jazzy licks, you could do a lot worse than this title, available now from your local Big Fishmonger. Dave Stewart

This 7.8GB piano library from Best Service features a Steinway model 'D' recorded in Belgium's top-notch Galaxy Studios and presented in both 16- and 24-bit versions. Release and 'resonance' samples (of which more in a moment) are included, and the instrument can output in a variety of multi-channel formats including 5.1 surround.

Let's cut to the chase — the piano sounds great. Packing up to eleven dynamic layers under its gleaming black bonnet, and sampled at tone intervals, it 'speaks' clearly and precisely while retaining a subtle lyrical quality. Dynamic transitions remain smooth right across its seven-octave range; the beautifully transparent high notes are responsive to the most delicate of touches and the bass notes can deliver weight and power. Note-off realism is enhanced by a set of newly minted, well-programmed release samples. Classic sounding without being too 'steely' or overbearing, the instrument is subtle and expressive enough for jazz and classical music, and strong and bright enough to cut it in a pop mix. No sampled piano could ever replace a real grand, but this one does a commendable imitation at less than one percent of the price!

Reproducing the effect of a piano's sustain pedal is a conundrum for samplists; Best Service tackle the problem by supplying a 'resonance' sample (consisting of the sympathetic overtones of other undamped strings) for each note. Recorded at one dynamic only, these ethereal samples remain silent until you hold down notes and press the pedal, at which point they fade quickly into the mix — the resulting drifty, reverb-like wash is extremely pleasant and inspiring for the player, but isn't entirely lifelike.

On to the big selling point: 5.1 surround capability. There are six-channel multis combining front left and right (close mics), rear left and right (ambient room mics), centre (mono mix), and LFE (low-frequency mono mix) presentations. These multis are highly CPU-intensive, but you can reduce the strain by using just the front and rear mikings, which still feels like being in the hall with the piano. Alternatively, you can stick with stereo by using only the front mics.

Surround compatibility is all very well, but there are other, more important considerations: is it a superior, well-maintained instrument? Is it well-tuned? Is the room acoustic good? Was it miked sensibly? Does it play well over MIDI? In the case of Galaxy Steinway 5.1, the answer to all these questions is yes, leaving me with no alternative but to recommend it highly. However, you should bear in mind that judging piano samples is a subjective process which depends on the player's experience, expectations, taste, and touch, so do check out the on-line demos before parting with your cash! Dave Stewart

The solo violin's sustains have a tasteful, sweet vibrato which reaches full effect after about a second. The player also puts a slight volume fade on the front of each note, but while this expressive style sounds fine in isolation it doesn't work very well for legato melodies. I tried the old trick of layering short notes over the sustains to add some attack, but the effect wasn't entirely convincing. The lack of straight sustained notes with a fast attack is arguably the library's greatest weakness.

Matching the violin's expressive delivery, the viola and cello sound lovely on very slow-moving passages, while the double bass's brusque, no-nonsense attack copes better with faster lines. I really enjoyed the sound of the double bass — big, authoritative, and with a lot of character. Its pizzicatos have a very nice round, mellow timbre and great tuning, and work equally well for orchestral and jazz styles.

The library includes no grace notes or col legno bow hits, but I did find a few fast chromatic scales and some great slides lurking undocumented in the effects section. Unusually, there are no staccato samples; short notes come in the form of marcatos (which the viola plays rather languidly) and spiccatos, both supplied in separate up- and down-bow versions. The most emphatic short-note style is the violin and cello's martelé (hammered) delivery. Dynamics are a strong point: the main articulations use three dynamic layers, and all instruments play excellent, strong crescendos of three different lengths. There are also a large number of programs with mod wheel control, useful for subtle swells and tonal shadings.

No samples have been looped; durations are on the short side, with sustained notes lasting between five and seven seconds and the violin's harmonics expiring after barely a second. However, the lack of loops does allow the players' vibrato to develop naturally from start to finish, while the short note durations guarantee that any feelings of fear and suspense generated by the string tremolos will be mercifully short-lived!

Although London Solo Strings lacks certain contemporary features like release samples or a monophonic legato mode, it covers a lot of musical ground in depth and boasts a sound quality second to none. The pricing is reasonable, and composers will appreciate this pragmatic set's ability to do its job efficiently with minimum setup time. Dave Stewart 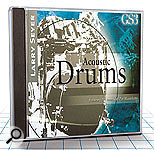 The snare drums all come across as well-recorded, classic rock snares. My favourite is the Ayotte model: precise, big, and beefy with just the right amount of snare buzz. A Montineri snare constructed from surgical steel (good for heavy metal?) has a harder, more aggressive attack, while the lower-pitched tones of the Slingerland and Sonor models work well for old-school funk. There's also a menu of tasty cross-stick samples for soulful ballads.

The kick drums range from the traditional pop/rock dry thud to more open, sustaining hits better suited to jazz and acoustic settings. Tuned quite deep, the library's set of Yamaha toms sound big and resonant. Played with mallets, they resemble timpani — a fabulous sound. Cymbal stand-outs include ear-catching cup chimes and splashes, rivet rides, China crashes, and mallet rolls. My only criticism concerns the hi-hats. Although it's handy to use the mod wheel to switch between tight and loose hits, I would have preferred the tight samples to be the default set.

As well as offering these elements separately, the library combines them into 115 very usable kits — these sound very good right out of the box, and the well-designed, modular programming system makes it easy to substitute a component (say, the kick). Reduced, two-octave General MIDI versions of all kits are also provided, along with 100 MIDI files covering a variety of styles.

Thirteen excellent 'room colours' for the Gigapulse reverb are included, fashioned in two-, five- and seven-channel configurations. The rooms range in size from a beach hut to the Taj Mahal, and feature some enjoyable 'trash' micro-spaces which sound like the samples are going through a Martian transistor radio.

If you need a solid and varied collection of acoustic drum-kit sounds, they don't come any better than this title. Despite the fact that there are no sustained drum rolls, licks, or brush hits, this set is a programmer's dream. Congratulations to all concerned (including programmer Stephen Orsak) for this great-sounding, versatile, and dynamically responsive library. Dave Stewart