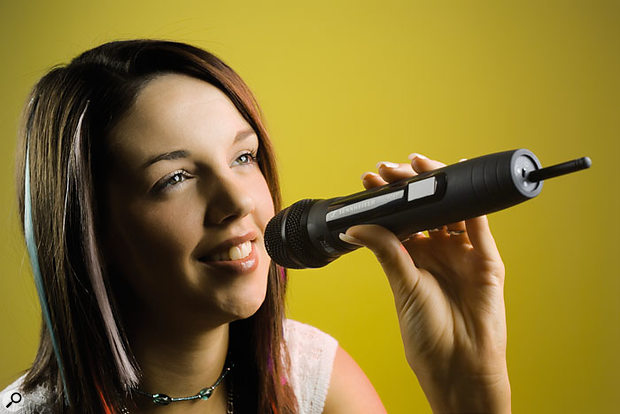 It's not difficult to find a cheap wireless mic system these days, but not all have a prestigious name tag — unlike this Sennheiser true-diversity setup, their most cost-effective to date.

A schoolteacher friend of mine recently asked me for advice about what sound equipment to buy for his school hall. As Gavin's requirements included a hand-held radio microphone and finances were limited, I suggested that he wait a week or so until I'd had the chance to look at the latest affordable UHF radio mic system from Sennheiser: the Freeport.

The Freeport is Sennheiser's budget UHF full-diversity radio microphone system, providing four user-selectable channels within the range 863-865MHz (licence-free in the UK) or 742.5-744.5MHz (for use only in the US and some European countries). All models supplied in the UK should operate in the licence-exempt band, which, I believe, is also unaffected by the introduction of the new digital TV channels and consequent spectrum re-allocation in the future (see our feature on wireless system licensing in the September 2005 issue of SOS Live). The four frequencies will operate simultaneously, free of intermodulation, so you can use up to four Freeport systems together (you will need a separate receiver for each microphone). A point to note is that the frequencies used by the Freeport are not exactly the same as those used in other radio systems from Sennheiser, such as the Evolution range, and you'll need to check frequency compatibility if combining different systems.

The Freeport is available in hand-held, belt-pack and lapel versions, and the hand-held vocal set is the one reviewed here. It arrived well packed in a fitted cardboard carton, which is not intended to be a transit case for regular use, although it looks as if it would see you through a few gigs, or serve as a storage case if the mic were going to be kept and used at the same place. The set comprises the hand-held microphone, finished with a smooth grey non-slip surface, receiver unit, power supply and mic-stand clip. 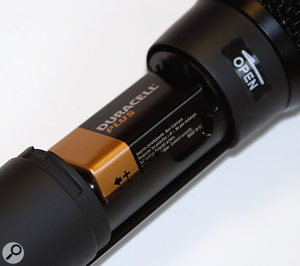 The 9V battery inside the hand-held mic powers its transmitter.Photo: Mike CroftsThe SK3 hand-held vocal mic is a dynamic cardioid type with a fixed capsule. Power for its 10mW integral transmitter is provided by a 9V battery (what us oldies call a PP3!), which gives around 10 hours of operation.

To gain access to the battery compartment and channel-selector switch, part of the microphone body which acts as a locking ring must be twisted about a quarter turn; the rest of the body then slides away from the capsule (but not completely off, so it shouldn't get damaged or mislaid) to allow access. One of four available channels can be selected by means of a small rotary switch, which really needs a thin screwdriver to turn, as it's recessed out of harm's way. The channel numbers one to four are clearly visible around the selector. On the bottom of the mic body is a slightly recessed on/off toggle switch, with a small red LED to indicate when the microphone transmitter is powered up. The short antenna also protrudes from the base-plate, and, although flexible, is quite chunky and looks as though it would withstand the amount of punishment it would tend to get during normal use.

At the other end, the capsule is protected by a strong wire-mesh basket, which contains a removable and washable foam pop/moisture shield. Although the basket assembly unscrews for simple maintenance, the dynamic capsule is not removable and is therefore not interchangeable with another capsule. The capsule mounting is itself flexible to reduce physical shocks which would otherwise be transmitted through the body, and there's an additional foam screen on top of the head unit, providing extra protection. Overall, the microphone feels light and well-balanced, and seems very well built. Even the on/off switch has a quality action. 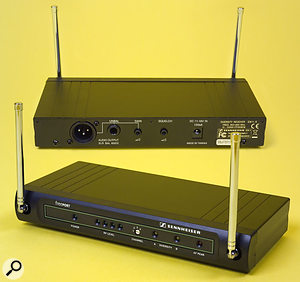 The Squelch control, seen on the rear panel of the EM1 receiver, is very much like the threshold control offered by an audio gate. It can be adjusted to allow through the signal from your own transmitter but to mute weaker signals that are lower than the level that has been set. The simple front panel of the EM1 receiver features a power LED; a four-segment Radio Frequency LED meter to show signal strength; a recessed channel selector; a pair of Diversity LEDs to show whether channel A or channel B is in use; and an 'AF Peak' indicator to show audio peaking.Photo: Mark Ewing

On The Receiving End

The EM1 receiver is housed in a small metal case of about a half-rack size. However, as far as I know there's no rackmount kit available for this model. On the front panel are two swivel antennae (happily non-telescopic, therefore it's much easier not to poke your eye out with them), a rotary channel selector (of the same type as on the microphone) and LED indicators for power, channel activity, audio peaking and RF (radio frequency) level. On the rear panel are balanced XLR and unbalanced jack outputs, Gain and Squelch controls and the DC power connector.

The receiver is a full-diversity design, which means that it incorporates two independent receiver paths, one connected to each antenna; the receiver automatically switches to the one providing the strongest signal, thereby reducing the risk of system drop-outs and loss of signal continuity. It's a very neat little package, and again has that quality feel about it so typical of products from this manufacturer.

Having inserted a battery and checked that mic and receiver were both set to the same channel, I switched both parts on and did a few "one two"s. At first, I missed having an audio level meter on the receiver — it's very reassuring to see the signal going nicely up and down before you turn up the PA — but of course you can set this on your mixer anyway. 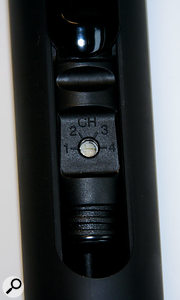 Also revealed when the mic body is slid apart is the recessed channel selector switch, used to choose one of the system's four available operating frequencies.Photo: Mike Crofts

The sound quality offered by the Freeport is absolutely fine for a range of uses, from stage vocals to conference speech and PA announcements. The 3dB frequency response claimed in the handbook is 80Hz to 16kHz, and the Freeport's performance certainly sounds in line with this specification. Speech comes over very clearly, with a nice crisp top end, good solid punch in the middle (especially on louder signals) and enough smoothness lower down. There's no unwanted system noise either, and in a quick comparison with some of my favourite general-purpose vocal mics it more than held its own. Although I didn't get the chance to use the Freeport system in a full-blown live situation, I did manage to slip it into a full band rehearsal, where it made a very good showing.

The RF range of this system is impressive: reception is full-strength (four LEDss) up to about 30 metres 'line-of-sight', and I still had three green lights at over 100 metres of open country. Everyone who handled the mic liked the feel and balance of it. I also appreciate the Freeport's understated appearance, which is similar to the more upmarket Sennheiser models, and indeed it looks and sounds as though it should cost a lot more than it actually does.

Obviously, you can't have absolutely everything in this price range, and some features have been left out: there are only four preset channels to choose from, and there's no audio level meter or fancy pilot-tone technology. What you do get is a very nicely built, neat-looking and good-sounding system for relatively little money, which will do for me any day. When considering buying 'budget' products, I've always been keen on those from leading manufacturers in the particular field, because they have their reputation to maintain, and I know from personal experience that Sennheiser UK are able and willing to provide good technical support.

So, having had a look at the Freeport system, I like it a lot — and yes, I think it could be the system you want, Gavin. I'm buying this one, though.

The Freeport is an excellent little system which performs well, looks good and won't melt your credit card.

The three Freeport systems each cost £229 including VAT.