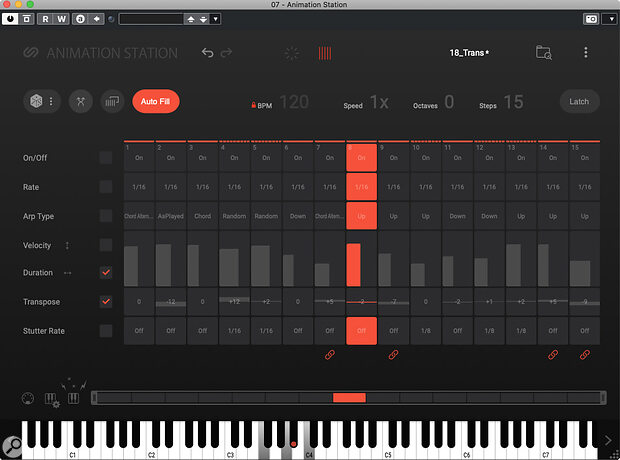 Sample Logic’s first plug‑in can bring your samples and music to life.

Sample Logic have a well‑established catalogue of sophisticated virtual instruments, and have just released their first plug‑in. Animation Station delivers a combination of the pattern‑ and arpeggiation‑creation tools found in many of their own instruments as a standalone plug‑in, which can be employed with any of the user’s favourite virtual instruments.

Animation Station is, in essence, a standalone step sequencer/ arpeggiator. It allows you to create patterns of up to 64 steps in length and provides control over seven parameters for each step: step on/off, playback rate, arpeggio type, velocity, duration of note within step, pitch transpose of step above trigger note, and stutter rate. Hovering over any lane label produces a drop‑down menu to access presets for just that lane. You can also ‘link’ steps using a button that appears as you hover over a step. This creates a group of linked steps (they don’t have to be adjacent steps), where edits made to one step within the group are then applied to all linked steps.

As described more fully below, one of the main features of Animation Station is its emphasis on randomness. You can opt for totally random pattern generation if you are feeling particularly lucky (or experimental!), but you can also constrain the randomisation process in a number of ways to generate more subtle variations on your sequence.

The vast majority of the controls are contained within the default Linear View screen. This includes access to the preset browser, undo/redo buttons, tempo, playback speed, adding additional playback octaves, number of steps and a latch option. At the bottom of the screen is a zoom bar, MIDI export, Mod Wheel (it can control either velocity or duration) and keyswitch assignment, and a MIDI panic button.

Amongst other things, the Playback Settings panel gives you options in terms of velocity response and timing.Top‑centre, you can switch between Linear View and Circle View. The latter offers only limited editing options, but the circular layout provides rather cool looper‑style playback visuals. Top‑right, clicking on the three vertically arranged dots opens a two‑part settings panel. The Playback Settings panel lets you set a balance between the velocity set in the pattern editor and any trigger note velocity. You can also ‘humanise’ the velocity, add a degree of swing and change the playback direction mode. I’ll come back to the Random Settings panel below. The three dots next to the main ‘dice’ randomise button pops open tick boxes at the left end of each parameter lane (these are visible in the main screenshot), allowing the user to include or exclude parameter lanes from the randomisation process. Usefully, if the combined length of your pattern’s steps does not complete a full bar, the Auto Fill button appears; one click and extra steps will be automatically generated to tidy things up.

Configuring Animation Station for use with one of your virtual instruments is straightforward but somewhat DAW‑dependent. The PDF manual provides straightforward instructions for multiple mainstream DAWs, and I was up and running within Cubase in just a few clicks.

Animation Station’s primary function is to provide new musical inspiration with minimal effort. To get you started, the plug‑in includes around 300 preset patterns organised into four categories. The Standard and Transposed groups contain a wide variety of pattern styles, with the key difference being that the latter feature scale‑based pitch shifts in the Transpose lane. Patterns in the Glitched category make full use of the Stutter Rate lane to provide plenty of electronica‑friendly timing quirkiness.

Perhaps more surprising — and a lot of fun to explore — is the Drum Machine category. You can use the patterns to target a single drum sound (for example, to create a pattern for just a kick or just a hi‑hat) but holding down the appropriate keys for multiple drums (for example, kick, snare and hi‑hat of your drum VST) at the same time can also produce some very cool grooves. It also works brilliantly with orchestral percussion or hand percussion such as claps and stomps.

The presets are great, but the real fun of Animation Station lies in using the various randomisation options to supply an assisted musical nudge in creating your own patterns. Sample Logic have struck a very sensible balance here between features and ease of use. providing enough possibilities but without bogging you down in overly complex control sets. That’s not to say I can’t think of a feature or two I’d love to see added (more on that in a minute), but what’s here is both creative and straightforward. 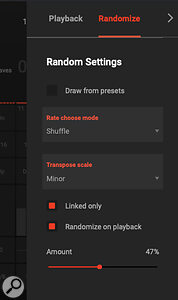 The Random Settings panel lets you control just how far the randomisation process can go in changing your current pattern.The lane tick boxes mentioned earlier allow you to limit which parameters are subjected to a roll of the randomisation dice, so you can go fully random or just let Animation Station gently stir the pot for a select parameter or two. Also cool is the Shuffle button (the icon with the double arrows next to the Dice button). This retains all the settings for each step, but randomly reorders the steps, which can be very effective in creating pattern variations that retain a sense of being related.

The Random Settings panel provides further control. For example, selecting Draw From Presets forces Animation Station to use the factory presets as a pool of settings for randomisation options. Choosing the Shuffle option for the Rate Choose Mode setting means that Rate settings are swapped with other steps, preserving the pattern length. Enabling Linked Only is particularly useful in that you can limit the randomization to just the selected steps. Equally, the Amount slider can be used to constrain the degree of change the randomisation makes to parameters. And, if you limit the randomisation to just a few lanes and/or steps, enabling the Randomise On Playback option can be very cool; randomisation is applied each time the pattern is cycled through, creating endless variations.

While routing Animation Station’s MIDI output to a suitable virtual instrument is very easy, you can also export MIDI for your patterns for further editing and arranging within your host DAW. This works very smoothly and, combined with the randomisation options, it’s easy to build longer sequences with subtle variations or to create contrasting song sections from multiple patterns.

Sample Logic’s first plug‑in is both impressive and inspiring.

I had a lot of fun using the plug‑in. Whether it was to generate some synth bass‑line ideas, or arpeggiated/full chords with some interesting rhythmic patterns, Animation Station makes an excellent ‘ideas assistant’. Used with a staccato string sound — and avoiding the Stutter Rate lane — it was also an interesting choice for creating string ostinatos. It also worked nicely with a well‑sampled ‘clap’ virtual instrument and produced some very cool acoustic and electronic drum patterns.

That said, if I was prone to greediness, it would be great to see a couple of additions to the feature-set that, hopefully, wouldn’t compromise the easy‑to‑use workflow. First, it would be awesome to see a couple of MIDI CC lanes added with the option to specify the CC number target within the virtual instrument being used for playback. This would open up a huge range of useful possibilities for ‘animating’ your sounds. Second, it would be great if you could trigger the Randomly Reorder Steps button in real time from a keyswitch, and even better if you had the option to apply this action to just linked steps. I’ve no idea if these suggestions are technically possible, but they would add another layer of icing onto an already well‑iced cake.

Like other standalone arpeggio/pattern generators (for example, Sugar Bytes’ mind‑bending Thesys or Consequence), its price tag makes it more than a casual purchas, but Animation Station does exactly what it is designed to do; it helps you spark a new musical idea, and creating a few variations on a cool pattern can take you from zero to musical hero in a very short space of time. With MIDI export, you can do as much, or as little, hands‑on personalisation as you think is required.

This is excellent stuff from Sample Logic and I’m sure Animation Station will have considerable appeal for busy media composers or producers who regularly need a fast‑track start to a new musical idea.

Sample Logic’s first plug‑in is both impressive and inspiring. Animation Station is very useful tool for anyone needing new musical inspiration in a couple of clicks.