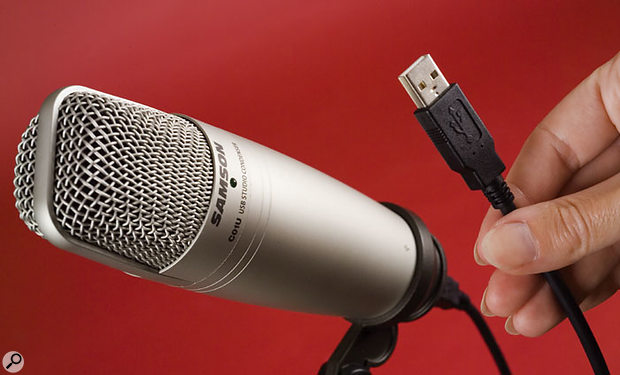 If you want the simplest possible computer recording setup, it doesn't come much more straightforward than this: a mic that plugs straight into your Mac or PC's USB ports.

Samson's C01U USB condenser microphone is a 'digital' version of their entry-level C01 back-electret, medium-diaphragm studio microphone. The 'digital' tag refers to the fact that it has a built-in analogue-to-digital converter and interface, enabling it to connect to a computer workstation via USB rather than the more usual analogue, balanced XLR cable. It outputs at 16-bit resolution and supports sample rates of 8, 11.025, 22.05, 44.1 and 48kHz. The convenience aspect of a USB microphone is undeniable for those working entirely on computers as it enables recordings to be made without buying any additional soundcard or audio interface, although the computer does need an audio output of some kind in order for you to be able to hear your recordings. The direct USB output also allows the microphone to be used without a separate mic preamplifier or the source of phantom power that condenser mics normally require, as everything is powered from the USB port.

Judging by the specifications and the price, Samson have targetted this microphone at the entry-level home-studio user and multimedia market, as more demanding applications would probably require 24-bit output resolution, although Samson have gone to great lengths to make the best of the 16 bits available. The main limitation of most basic 'digital' microphones of this type is that the internal preamp has a fixed gain prior to the analogue-to-digital conversion stage, so you only get full resolution when the microphone is hearing the maximum signal level it can accept without clipping, but Samson have been quite clever in their design. Singing at an average level, a couple of inches from the C01U, resulted in a peak level of around -20dB, which with a fixed gain structure would knock at least three 'bits' off the available 16-bit resolution. This would be most undesirable, so Samson's engineers have added a two-stage variable analogue gain cell inside the microphone prior to the converter. If you just use the mic as it comes, the computer's own system gain control actually governs the mic's internal gain cell (in the Audio MIDI Setup controls, in the case of Mac OS). However, as documented in the manual, you can also download a control panel applet, called Soft Pre, from the Samson web site, and this can be used to control the internal gain of the mic. Up to +48dB of additional gain is available, and the applet also provides metering, variable-frequency low-cut filtering and a phase invert switch.

The downloadable Soft Pre applet allows software control over the C01U's gain cell and other attributes.Photo: Mark EwingThe Mac OS X Soft Pre applet is currently available as a free download from the Samson web site, although the Windows version was still under development at the time of this review. Mac users running OS 10.4 need to create an Aggregate Audio Device in the Audio MIDI Setup utility so that the Samson's input stream will be added to that of any existing audio interfaces. Those running older versions of Mac OS X can choose the mic as their default audio input. Once I'd installed the applet from the Samson web site and created an Aggregate audio driver, I put the applet control panel in the Dock so I could open it whenever necessary, although the mic was recognised by my system prior to the software installation. Samson tell me they have succeeded in running multiple C01Us via a USB hub, which opens up some interesting possibilities for the future.

Mechanically, the microphone is finished to a very high standard and feels reassuringly solid. It uses a 19mm cardioid back-electret capsule with a three-micron diaphragm, suspended on an internal shockmount. The design follows that of a typical 'classic' side-entry vocal mic and the frequency response is quoted as being flat within 1dB over the audio range. Its maximum SPL is quoted as a perfectly adequate 136dB, but there are no noise specs and, as I recall, one of my concerns with the original C01 was that it was a little noisy by comparison with more costly studio mics unless used for close-miking fairly loud sounds. There are no pad or low-cut switches on the mic, although the applet does provide a very effective low-cut filter with variable cutoff frequency. A green LED on the mic confirms that USB power is being received.

Once I'd connected the mic, I found there was a slightly higher latency than I expected for the chosen buffer size, and at 44.1kHz, I could still perceive a hint of delay when Logic 's Audio Devices and Drivers page was set to 128 samples, although I think most singers would find this within acceptable limits. This may well have beeen an attribute of the Aggregate driver, but as long as you can work with buffer sizes of 128 samples or under, the latency is fine. 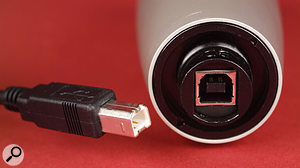 The Samson C01U requires a common USB-B type plug.Photo: Mark EwingLike the original C01, this mic does produce a low background hiss from its integral circuitry, although not enough to worry about when close-miking loud instruments or strong vocals. The noise is more evident on quieter instruments or voiceover work, but for typical studio applications the C01U can give good, clean results. Far more worrying, however, was a significant level of digital background clutter riding above the hiss when I tested the mic on a dual-processor Mac G5. I asked Samson's UK distributors, Sound Technology, about this and they found they could replicate the problem on some (but not all) tower G5s, whereas all other Macs seemed quite happy. Switching to my G4 iBook confirmed that the digital noise was gone.

Tonally, the mic is fairly neutral, translating transient details rather better than a similarly priced dynamic mic would. It could certainly be used to record a very respectable vocal track, albeit without the transparency and shimmer of a top-class microphone.

Although unashamedly entry-level, the C01U is quiet and clean enough to record vocals and instruments to a very acceptable standard, provided that they are close-miked, and its performance is well above that of any multimedia mics I've tested. As far as I can tell, the subjective performance of this mic is essentially the same as that of its wired counterpart, and that model has sold well for Samson. The digital noise issue will be a concern if you have a G5 tower-based studio system, but it could be argued that anyone with such a deluxe computer should be looking for a more sophisticated mic anyway!

I'm sure we'll be seeing a lot more USB mics in the future, but in my view, if they're going to approach the performance of a wired mic, they need to follow Samson's lead in providing some form of gain control or at least a choice of switchable gain settings prior to conversion. More serious models will also need a 24-bit output to provide adequate resolution at typical operating levels while still leaving some safety headroom. As it stands, the C01U is a very practical solution for entry-level users who don't have an audio interface and, if used carefully, it can produce commendable results in a wide range of applications provided that the source being recorded isn't too quiet or distant.

Currently, there are only a couple of other USB-equipped condenser microphones, although this may well prove to be a growth area. SE Electronics' D01 and Blue's Snowball are both rather more expensive than the C01U, but they also offer additional features such as the D01's headphone socket.

The C01U is a neat concept. Although it is based on a budget model that doesn't have the same technical specifications as more sophisticated (and more expensive) studio microphones, it can produce impressive results for close-miked vocals and instrument use. Laptop users who record on the move will particularly appreciate the fact that no other audio interface or mic preamp is required.