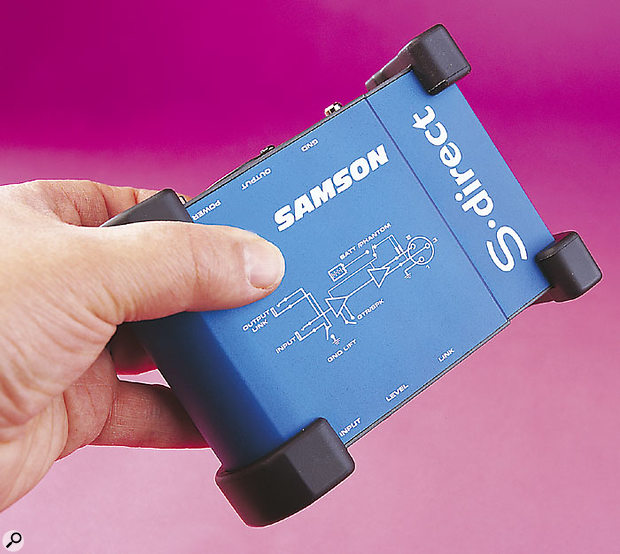 Samson's compact 'S'-series boxes solve a variety of studio problems without getting in the way.

Since they extended their hardware division beyond mixers, Samson have come up with some incredibly useful, yet affordable products — one of the benefits of designing in the US, but manufacturing in China. The new 'S'-series units are all packaged in desktop-sized boxes and, with the exception of the S•Direct DI box, are powered from included external PSUs. The bright-blue metallic casework is complemented by chunky corner mouldings, black front and back panels, and a block diagram screened on the top, but there's more to these little problem solvers than mere cosmetics.

The S•Amp is an extremely simple headphone amplifier, with one stereo input jack on the front panel and four stereo headphone output jacks on the rear. Each of the four phones outputs has its own level control and, though no power is specified (this varies depending on the impedance of the phones anyway), the amplifiers can drive phones down to 100Ω in impedance and provided plenty of subjective level when tested with my assortment of studio headphones. The only odd feature is that the power LED is on the rear panel.

Next out of the hat was the S•Monitor, another simple but useful box intended to provide personal headphone monitoring on stage or in the studio. Essentially, it incorporates a balanced XLR mic input with a Mic Thru XLR connector, and combines the mic signal with any stereo line-level source fed in via the rear-panel stereo jack, before feeding it to the headphone outs. There's also a Mix Thru stereo jack that allows multiple units to be connected where more outputs are needed.

There's one rotary control to set the microphone level and another to set the stereo mix level. There are no individual or overall phones level controls and, according to the brief manual, only dynamic and battery-powered mics can be connected. This seems like a missed opportunity — because the mic input and thru output are hard-wired, it should have been a simple matter to install isolating capacitors to prevent the internal preamp from being adversely affected by the application of phantom power via the thru socket.

Other than this limitation, the unit works well, with plenty of headphone level available. The mic amp isn't the quietest I've heard, but as this only affects the headphone outputs and not the Mic Thru signal, it's not really an issue. This little box could be used to allow a singer to set their own monitor level and balance, or to arrange zero-latency monitoring when you're overdubbing onto a computer-based system. 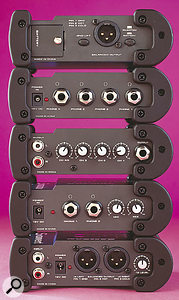 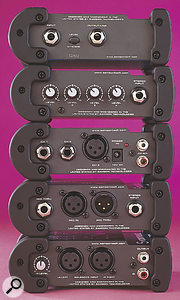 Each of the 'S'-series units has controls at both ends, as shown here — from top to bottom you have the S•Direct, S•Amp, S•Mix, S•Monitor, and S•Convert.Photo: Mike CameronLucky dip time again, and out from beneath the polystyrene packing granules popped the S•Mix, which combines up to five inputs into a stereo line-level mix. It has a mic input with phantom power, two high-impedance instrument/line jack inputs and a stereo pair of phonos.

The front panel has level controls for the mic, both jacks and the stereo phonos, where the mixed output is available both on a TRS stereo jack and on a pair of phono sockets. No individual pan controls are available, so mono inputs are panned centre and the stereo input remains panned left/right.

There's no phantom power switch, which is fine as long as you only connect balanced mics with proper balanced cables. However, no phantom power voltage was quoted in the manual so, being of a suspicious mind, I measured it. According to my meter, it was around 14V, which will reduce the headroom available on any capacitor mic that's used with it — and in some cases, the mic may not work at all!

Other than this 'glossed over' shortcoming, the unit worked well and the mic amp was unexpectedly quiet. The only thing to watch out for is that the inputs can be noisy if turned up when nothing is connected.

Next up was the S•Direct, a simple DI box that runs from phantom power in the 24-48V range, or from a 9V battery. It has a single jack input, with a hard-wired thru socket (again on a jack), and the main output is on a balanced XLR.

A button selects battery operation, and there's also a Ground Lift switch to help avoid ground-loop hum in complex systems. As you'd expect, the S•Direct switches to operating from phantom whenever the circuit senses that phantom power is present, but the switch is provided as a means of switching off the battery when the unit is not in use.

A further switch sets the input to instrument/line level or guitar amp speaker level — you need to ensure this is set correctly before you plug in a guitar amp! Samson haven't quoted the input impedance, but it was high enough to keep most guitars and basses happy. The unit does as claimed and is quiet into the bargain, though I'm still a little nervous about that level switch on the input, as guitar amplifiers can output quite high voltages!

Finally comes the S•Convert, a useful level matcher and balancer/unbalancer. Two channels convert balanced XLRs at +4dBu to unbalanced -10dBV phonos, while two more do the exact opposite, bringing two unbalanced phonos up to +4dBu on balanced XLRs. Both signal paths include a stereo level control with a centre-detented unity gain position, which is a nice idea, because not all equipment conforms exactly to the -10dBV or +4dBu standards, especially synths and keyboards.

The unit works well, which is not surprising given that level conversion is a technically undemanding task, but that doesn't detract from the usefulness of the device at all. If you have keyboards that don't provide enough level to keep your mixer or soundcard happy, this little box provides a very practical solution.

The 'S' series as a whole is a very attractive and cost effective range of problem solvers, and in the main they work very well — they also all have a three-year warranty. There are a couple of dubious design features, mainly relating to the provision of or tolerance to phantom power, but provided that these don't impinge upon what you need the units to do for you, it won't be a problem. I particularly like the styling of the units, and they also feel pretty solid. The only one you might need to nail down is the headphone amp, because four sets of phones, all with curly leads, can exert quite a pull!

I'm all in favour of affordable problem solvers, and this range should meet a lot of common requirements without breaking the bank.