Before you can call your computer a studio, you need at least two things: a means of getting audio into your computer, and some way of listening back to it. Enter the Samson Studio GT! 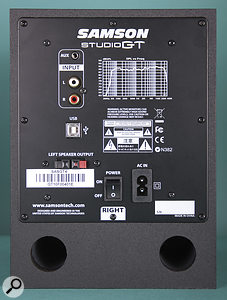 The rear panel of the right speaker, which houses the audio interface. This hosts the auxiliary inputs, the power socket, the USB port and the amplified output to the passive speaker.

For many of us, there's a gulf between what we'd like to use and what our budget and/or space permits. Smaller, powered monitor speakers, for example, have been around now for a very long time, and they meet the needs of those setting up their 'studio' on a computer desk. But in the Studio GT, Samson have gone one further and built a USB audio interface into one of the speakers. In addition to studio applications, Samson are pitching the Studio GT system at anyone wanting better‑quality sound for general music playback, gaming and video sound.

These powered, two‑way speakers measure 232 x 168 x 194mm (HxWxD), and are based around a magnetically shielded 4.25‑inch bass/mid-range driver with a polymer cone in a roll surround. This is teamed with a one‑inch, neodymium‑powered, silk‑dome, high‑frequency driver, which is protected by a metal grille.

Each cabinet is powered by 18 Watts (RMS) of amplifier power, and both power amps are built into the speaker that also houses the interface circuitry. The passive second speaker links up to the first using small spring‑clip terminal connectors on their respective rear panels (a two‑metre length of lightweight speaker cable is included). It is important to note that, although these speakers are powered, the crossovers are passive — the speakers are not bi‑amped.

Two small bass ports are located on the rear of the MDF cabinets, with the 'interface' speaker's rear panel also featuring two stereo aux inputs for monitoring (on a pair of phono connectors, and a stereo mini‑jack), the USB socket, the terminals for the second speaker and a two‑pin power inlet with switch. There are no level controls for the aux inputs, so these must be adjusted at source.

A single USB connection links the monitors and their interface to the computer, so you save on wiring as well as desk space. The interface uses 16‑bit conversion and operates at sample rates of up to 48kHz, so though clearly not aimed at high‑end professionals (who normally work at 24‑bit), the sound quality will probably suffice, and is unlikely to be the weakest link in the chain, given the acoustic limitations of small studios.

The quoted frequency response is 65Hz to 22kHz, which, from looking at the included response plot, seems to be correctly measured between the ‑3dB points. The crossover network comprises a 4kHz, 6dB/octave high‑pass filter and a 1.4kHz, 12dB/octave low‑pass section. No maximum SPL is quoted.

The built‑in interface supports USB 2 operation, and there are two mic/line/instrument inputs on 'combi' XLRs (with front‑panel gain adjustment and clip LEDs), plus two mini‑jack headphone outputs. The left headphone socket has its own level control independent of the speaker level (the speakers mute when the right headphone socket is used).

There's no instrument/line switch, but the input impedance is 1MΩ, which, while clearly a compromise, should work adequately well with both. Phantom power is permanently applied to the mic inputs, so care must be taken not to connect ribbon mics when the speakers are turned on, and not to connect mics wired for unbalanced operation at any time.

Zero‑latency source monitoring is also catered for, via a knob that balances the input sources with the DAW output. A separate switch selects between mono and stereo monitoring. 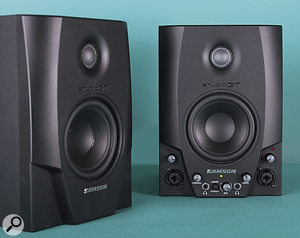 Studio GT installation turned out to be a simple plug‑and‑play operation on my Mac, with no audio drivers or other software to install — though if you don't already have a DAW, Samson are bundling a copy of Cakewalk's Sonar LE. This review was done on my Macbook Pro 2.33GHz Intel Core 2 Duo machine, and the Samson interface appeared in the list of available audio devices almost as soon as it was plugged in.

My first test was to play back some commercial tracks, and though these speakers don't play monstrously loudly, they do present a more solid impression of bass than you might expect from such a small driver and, as they are likely to be used pretty close up, the level should be quite adequate.

As you might expect, the sound isn't as open or detailed as you'd get from a high‑end studio monitor, but it is generally well‑balanced, with plenty of high‑end presence to counter the lows. Even standing directly on the desk, these little speakers give pretty good results, but they'd work even better placed on some type of isolation pad.

Plugging headphones into the right‑hand socket mutes the speakers, which is probably what you'd want to do when overdubbing, and there's a reasonable amount of clean‑sounding headphone output for most consumer‑type headphones. Samson quote 50mW of power into a 32Ω headphone.

My next test was to record some spoken word via a budget back‑electret microphone, which powered up nicely from the preamp input. On playback, there was no excessive background noise and the preamps had more than enough gain for the task in hand, though I felt the recorded sound was a little less crisp than I get through my own studio system using the same mics. Again, though, the sound wasn't bad and would certainly be up to basic home‑recording standards. The spec claims an output dynamic range of better than 90dB (A‑weighted), which, given the theoretical maximum of 96dB for an undithered 16‑bit system, is quite decent.

The Studio GT system is clearly aimed at the entry‑level market, or the musician with a casual interest in recording, and it meets those needs very well. There's no reason not to record and mix high‑quality demos or tracks to put online using these speakers, while the audio interface provides a clean way in for vocal and instruments which, while not the pinnacle of technical excellence, is streets ahead of what we had to endure when cassette multitrackers were the norm! If you need a compact solution that's easy on the wallet and simple to set up, you needn't look much further.

I can't think of any alternatives where an audio interface is built into the speaker in this way, though there are plenty of separate compact monitors and two‑in, two‑out interfaces that would fit comfortably on a typical desk. It would still be tough to get both at this price, though.

Though compromises are inevitable with products in this price range, the Samson Studio GT actually does a pretty good job and is capable of making some very decent‑sounding recordings. Having the audio interface built into the speaker certainly saves on wiring and desk space.