Like a Cold War spy, Olga is not as Russian as it first appears, but still hides a great deal of mystery and intrigue... 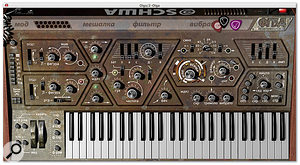 Olga's Russian control panel means a trial-and-error approach to programming. Unless you're Russian.The excitable email we got from the designer of Olga claims that it is an "analogue synth that sounds very different, looks very different, and is generally targeted at 'cool' rather than nervous, tweaky anorak types". Didn't this guy get the memo explaining that in electronic music, being a nervous, tweaky anorak type is cool? (That's what I keep telling myself, anyway...) To drive home the point that they mean Olga to be (and again I quote) "quirky, and a bit light-hearted", in contrast to the competition which is "terribly po-faced", tongue-in-cheek acronyms have been given to the DSP techniques used by developers Schwa: BADASS and GROOVE. Please, kill me now.

OK, enough with the cynicism. The idea behind Olga is actually quite charming. Olga is meant to feel like a mysterious old analogue synth that you've discovered on eBay, or dragged out from under a box of Amway products at a car-boot sale. Schwa are clearly thinking of the many obscure synths that were made in the USSR, so have taken the extraordinary step of labelling the synth in Russian. The design of the control panel is, in fact, more Hangar 18 than Soviet era synth (the Soviet-era Russian designs often being simply copies of the Rolands and Yamahas of the day), but, whatever, the result is definitely intriguing.

Like Schwa's other plug-ins, you can get Olga by downloading an 'evaluation copy' at www.stillwellaudio.com. No installer is supplied, so you must manually place the plug-in file in your AU or VST folder, depending on your platform. Olga is not free, but has not been hobbled in any of the traditional ways seen in demo software (there are no save restrictions, time-bombs, audio drop-outs, etc). The only limitation is that the first time you insert an instance of Olga into a project you have to wait while a five-second countdown is displayed. This hardly counts as nagware, and essentially means that you can use an unregistered copy of Olga indefinitely. Schwa's progressive approach is to let anyone enjoy their software legally, while hoping that people who like it will be decent enough to put their hands in their pockets.

As you'd expect, the first few minutes of playing with Olga are taken up with trying to figure out what all the controls are. This is a lot more fun than it sounds. If you're familiar with synths, it's fun trying to name all the controls. If you're not, it's probably just as much fun experimenting to see how the sound is changed by each of the mysterious controls. There's something to be said for not having everything handed to you on a plate, and limitations can be strangely satisfying and creative. Although old synth-heads will quickly identify the oscillators, envelope generators and filter, other controls are not so obvious, and I found that it was nice to build some patches in an organic, trial-and-error fashion, instead of taking a top-down, synth theory approach. 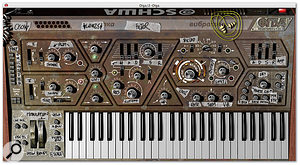 Spoiler warning! If you want to ruin the fun, you can let someone else do the translation work for you.You will be pleased to learn that Schwa have not taken the Russian concept to an extreme, and the PDF manual describes Olga's controls in English. A little clicking around on the synth panel will also reveal an alternative display mode, with English control names cutely stuck on with masking tape. It turns out that Olga is a fairly simple two-oscillator synth, with one main multi-mode filter, filter and amplitude envelopes, two LFOs, a gate trigger generator, a drive/distortion stage, and an effects module with phaser and chorus. Audio and modulation routings are fixed, and controlled with level/amount knobs.

Olga's oscillators are both the same, with a three-octave range, tuneable in semitones. Oscillator 2 has a fine-tune control for the classic detuned analogue sound. The oscillators can be switched between pulse and saw modes, then shaped further with an additional 'Shape' knob. In pulse mode, the Shape knob sets pulse width; in saw mode, the same knob is used to morph between saw and triangle wave shapes. An additional pot in each oscillator section controls modulation from LFO 1, which is hard-wired to the Shape control in Osc 1, and to the Detune control in Osc 2. There is no way to modulate any of the oscillator parameters from an envelope. Olga offers a selection of voice modes, including mono, eight or 16 voice polyphonic, and three unison modes — up to eight simultaneous detuned voices. A novel Duo mode alternates each played note between the two oscillators.

Both oscillators feed into the filter, which is a Moog-style ladder design, switchable between a 24dB low-pass mode and two band-pass modes. A slider lets you blend modulation from LFO 1 and the filter envelope, both of which are scaled by another knob. Everything then goes through a high-pass filter that can be used to tame the low end (of which there is plenty).

A prominent position on Olga's panel is reserved for the Drive section, featuring a circular pattern of slits through which shines a menacing orange glow when you crank up the drive. On some sounds, this successfully imparts a warm, tubey fatness, while on others it tends to be a bit grungy. The second, smaller knob is, ostensibly, the master output level control, although in fact it contributes rather more significantly to the sound. This is because there is a brick wall limiter on the output, which tends to come in at a quite a low threshold and add saturation to the sound. A feedback switch lets you add even more distortion.

As well as this deliberate distortion, Olga's GROOVE (Gaussian Reactive Oscillator Overdrive Virtual Engine) technology means that audio signals can be pushed into saturation and overdrive at all points through the instrument. All this distortion is both Olga's strength and weakness. Simple, bright, raw patches sound very convincingly analogue. However, it's all too easy for other sounds to get drowned in muddy, saturated mids and break up. To make clean sounds you need to keep the signal as low as possible at all stages.

Olga's effects section lets you apply either a Phaser or a Chorus to sounds. The Chorus is best in mono, as the stereo spread effect is overdone, resulting in nauseating anti-phase. The Phaser, however, is one of the hidden gems of the instrument. Three band controls let you sweep the comb filter frequencies, providing huge extra scope for shaping sounds.

Olga succeeds in its ambition to offer a novel and intriguing experience in a crowded marketplace of virtual analogue synths, despite its actual synth architecture being far from revolutionary. Although the Russian panel legending might seem like a simple gimmick, the work you have to put in is good fun, and might steer you away from your habitual synth programming approaches.

Sonically, Olga has strengths and weaknesses. It does manage to capture a nostalgic flavour that, for me, brought to mind dark synth pop and industrial music along the lines of early Human League and Throbbing Gristle. On a more contemporary tip, Olga can do classic monosynth basses and sticky leads in an authentically fat and dirty fashion that would work great in any electro house/electroclash production. However, the amount of saturation can overcook pads and the more delicate type of polysynth sound.

Olga's stripped-down feature set and fixed routing focus on the key requirements of a classic, small-form performance synth. The closest hardware comparison would probably be a Moog Rogue or Prodigy. Like a real analogue synth curiosity, it would be useful on those occasions when you're looking for a diversion from more predictable and well-behaved instruments. Za vashe zdorovye!

The virtual equivalent of finding an unknown analogue synth at your local boot-sale!