The field recorder market just got a little more crowded, but does Tascam's take on the portable two-track concept add anything new? 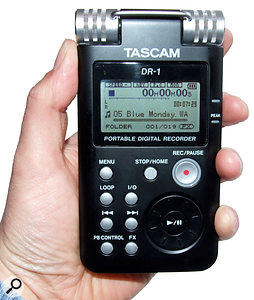 The choice of products in the hardware multitracker market might not be as bountiful as it was a few years ago, but small, pocket-sized recording devices with high-quality on-board mics are more popular than ever. Anyone interested in capturing a gig performance, collecting samples, or just having an ideas notepad currently has lots of options, one being the new DR1.

Tascam's DR1 has all the classic features for a product of this type, including a matching pair of angle-adjustable electret condenser mics mounted on its nose, an SD Media slot to accommodate Flash memory cards for recording, battery or mains powering, and a USB 2.0 socket for exchanging files with a computer. What's more, the whole thing, together with its padded carry pouch, slips comfortably into a modestly-sized pocket.

Having said that, the DR1 is not the most pocket-friendly product out there, even though it's marginally smaller than Zoom's popular H4. For example, it is twice the width and depth, and about 120 percent of the length, of my Olympus WS300M voice recorder. Admittedly, the WS300M isn't designed for critical audio work, but the Olympus LS10 (reviewed in last month's SOS) and Yamaha Pocketrak 2G certainly are, and they are almost as small. Being a bit on the chunky side does have its advantages though, as the DR1 is blessed with a relatively large, info-packed, backlit display screen (it's more than twice the size of the H4's), and all of its buttons and controls have plenty of room and are clearly labelled.

To challenge the competition, the DR1 borrows a few tricks from Tascam's larger digital multitrack recorders. Using the company's proprietary VSA technology, for example, the DR1can accelerate and slow down both WAV and MP3 files in real time, with or without changing their pitch. The recorder also offers a number of very immediate looping options, so that segments of a file can be marked out and repeated in a matter of seconds. Furthermore, an overdubbing setting and related balance control make it possible to non-destructively mix newly performed input material with playback files, karaoke style. Other notable features include a metronome, chromatic tuner and multi-effects processor, as well as comprehensive playlist options, for organising song material or simply using the DR1 as an audio/MP3 player.

Tascam's design places all the controls requiring continuous visual feedback, such as the Menu selector button, on the top surface, so that the user is able to monitor the progress of any action on the screen. Here also are controls such as the Record/Pause and track fast-forward/rewind navigation buttons, all the loop related controls, and a really useful scroll wheel that enables the user to, amongst other things, whizz back and forth through song files.

The I/O is sensibly placed around the edges, along with with those buttons and switches that are least likely to need constant adjustment. The most important of these, located on the right-hand edge, adjusts the level that's fed to the Line Out (headphone) socket, and there's a very useful 'Settings' button, which calls up a menu comprising the most significant recording-related adjustments. These include three input-gain sensitivity settings, a mono/stereo switch to ensure microphone compatibility, 'plug-in' power selection for the stereo mini-jack microphone input, a high-pass filter with settings of Off, 40Hz, 80Hz and 120Hz, a level control menu offering a limiter and dynamic compressor, and, finally, a left/right swap option for when unusual positioning of the DR1 leads to a reversal of the stereo panorama.

Tucked away on the opposite edge behind a plastic-hinged door, together with the USB socket, is the SD card slot. Tascam's latest media card test-sheet lists 49 compatible models, including some that are 8GB in size.

The onboard mics, which have five angled positions spread over a 90-degree range, are a proprietary design with a cardioid response. Their frequency graph shows a fairly flat response from 300Hz up to 10KHz, gently rolling off towards the bass. It is possible to attach an external stereo microphone, which may be useful if the recorder has to be operated away from the ideal recording location, but the output feed is only a mini-jack type with 'plug-in' power. There are no phantom-powered XLR outs, for example, and the single quarter-inch jack input (Mic 2 In) is mono. Nevertheless, it's worth saying that the main point of something like the DR1 is that the onboard microphones offer an all-in-one solution to field recording.

The on-board effects processor has 11 presets, which cover the usual reverb options, as well as a few handy thickening treatments such as chorus and detune. All have adjustable on-screen Level and Depth parameters and can be used as inserts when recording and/or for playback.

It doesn't take long to master the basic operation of the DR1. Even potentially fiddly tasks, like setting up loop points, overdubbing and making changes to the playback speed and/or pitch of a file, are joyously easy to do, largely thanks to the interaction of the large screen, scroll wheel and function buttons — it's certainly much easier to operate than Zoom's H4, for example. The overdub facilities, in particular, are really useful. Each new overdub creates a separate WAV file, so it's possible to build up a composition without destroying previous versions.

To a computer, the DR1 appears like any other storage device, so exchanging files is extremely easy, although the supplied 80cm lead is a tad short. Battery charging happens automatically whenever the DR1 is wired to a computer, and progress is indicated by an orange LED situated to the right of the screen (this goes out when the process is complete).

I was also able to update the on-board firmware from v1.01 to 1.10 very quickly and easily, by downloading a ZIP folder from Tascam's web site. The folder included the relevant firmware file, as well as PDF instructions explaining the update procedure and relevant improvements.

The recording performance of the DR1 is pretty good (providing the gain is set appropriately), and the level of noise generated by the mics is pleasingly low. In side-by-side recording tests with a Zoom H4, the DR1 proved itself to be relatively bright in the upper frequencies, although slightly lacking in warmth lower down. The limiter I found to be prone to distortion and the auto compressor acted unpredictably, so the best results were obtained with these tools turned off.

One immediately obvious issue is the inevitable noise picked up from hand-held use. In short, if you move a finger while holding the unit, the on-board microphones will hear it loud and clear. One solution is to mount the device on a stand, press record and then step clear, but there is no camera-style screw-hole for attachments. The basic package only includes a rubber wedge with sucker which, I assume, is for propping up the DR1 so that its mics are clear of vibrating desk surfaces. It's actually a shame that there aren't two of these wedges, as that would have allowed the DR1 to be stood clear of the surface at both ends! Fortunately, an accessory kit, which Tascam expect will retail for under £30, is on the horizon, and this includes a tripod adaptor, a mini tripod, a stand adaptor and a foam windshield.

A couple of issues I was going to complain about when I began reviewing were resolved in the firmware update, so it's only really the unimpressive auto level controls that disappoint, and, given that it is easy to update the firmware, perhaps Tascam can improve them fairly painlessly. Other than that, being able to mount the thing on a tripod or stand is important, so the cost of the accessory kit should be included in your budget. Fortunately, the DR1 is priced very competitively. Perhaps, also, the fact that the I/O does not include two XLR or quarter-inch jack inputs for stereo mic attachments will be an issue for some, as might the lack of 96kHz recording.

On the plus side, the large screen, widely-spaced buttons and useful navigation controls make it very easy to operate, proving that being large is as much of a benefit as it is a drawback. So, although it's probably not tiny enough for permanent pocket occupation, the DR1 is a still an impressive stereo recorder boasting a few very nice features of its own.

These days, every manufacturer seems to be making a portable digital recorder, but at just £209 the DR1 is in competition with those products at the budget end of the market. At present, the main contenders are probably the Zoom H4 and H2, M-Audio Microtrack II, Edirol R1 and R09HR, Olympus LS10 and Yamaha Pocketrak 2G.

A good little all-in-one stereo field recorder, with a few useful extra features, and all for a reasonable price.