You can have TL Audio's new series of vintage-styled valve devices in any colour you like - as long as it's black... 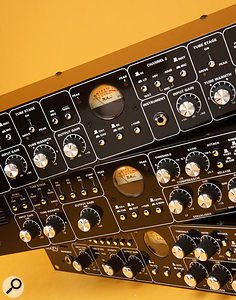 TL Audio (from here on TLA) are famed for their product series themed by colour. We've had the Indigo, the Ivory, the Crimson... and now we have the Ebony Series, which, as Spinal Tap would have put it, couldn't be any more black. The range comprises three discrete Class A 'hybrid' processors, each in a 2U format and with a retro-style, circular, moving-coil meter in the centre of the front panel. Each also includes an optional tube 'flavouring' stage with variable drive (optional in this case meaning that you can bypass it if you prefer the clean solid-state sound).

TLA seem to have put some effort into the cosmetic design of these UK-built devices, which combines glossy black paintwork with chrome knobs. All three have balanced I/O and are compatible with TLA's optional DO2 S/PDIF interface, for those wishing to plumb directly into the digital world.

The marketing literature makes a big feature of the Class-A design, although Class A is the obvious direction to take anyway when you're using discrete components to build preamps and EQ. Class B or A/B is more generally associated with power amps or the insides of many op-amp ICs, where it is used to reduce power consumption. In a Class-A circuit you essentially have a constant current flowing through all transistors, regardless of signal level. This is a bit more wasteful, in that power dissipation is higher than for Class B, but it avoids crossover distortion (which sounds extremely nasty, even in very small amounts). Discrete transistor circuits can also be designed to run from higher voltage rails than typical audio op amps, which allows for greater headroom. The maximum output level before clipping is 22dBu into a 2kΩ load or +26dBu into a 10KΩ load.

Internally, these processors are beautifully engineered, with a torroidal power transformer, a ceramic base for the single ECC83 tube, and multiple sub-circuit boards vertically mounted from a horizontal motherboard. There's virtually no separate wiring, other than around the power supply, and there's plenty of space for the digital option (which we didn't have at the time of the review). This mates with existing holes in the rear panel and plugs directly into a header socket on the motherboard.

TLA's Ebony A1 comprises a pair of preamps with mic, line and instrument DI input options. Each channel has switchable phantom power, a switchable 30dB pad and a switchable 90Hz low-cut filter. There's also a polarity-invert 'phase' switch, and, for when the tube stage is switched in, each channel also has its own rotary drive control so that you can adjust the amount of tube character you add. Red and amber LEDs monitor the amount of drive, with a green LED showing that the tube stage is in circuit. A central switch enables the analogue metering scale to run up to +10dBU for use with DAWs, which tend to have a maximum input level of around 16 to 18dB, and the single meter can be switched between the two channels to aid level setting, with a further switch for monitoring levels pre- or post- the master output level control. Separate peak LEDs always operate to warn of extreme levels. Rather than offering separate instrument and line input sockets, TLA have chosen to make the front-panel jack switchable between high and low impedance. The XLR inputs are located on the rear panel.

The Ebony A2 features the same preamp design as the A1, less the front-panel line/instrument input jack, but is configured for use with stereo signals, so there's only one set of knobs and switches in the preamp section, and no low-cut filter or pad. When the tube drive is adjusted, it affects both channels in the same way. The signal then passes through a compressor and a three-band equaliser offering high and low shelving controls (80Hz and 12kHz) plus a sweepable mid frequency covering the range from 150Hz to 7kHz. All three sections have a 15dB cut or boost range and, unlike some digital EQs you don't need to dial in very much at all to hear a difference, especially at the low end.

As compressors go, the design employed here is very straightforward, having controls for threshold, ratio and gain make-up, with basic fast/slow switching for the attack and release times, and a hard/soft knee switch. A further switch beneath the meter allows it to register gain reduction instead of channel A/B levels, while a further bank of switches above the output gain knob places the compressor pre- or post- the EQ and enables the EQ and compressor sections to be bypassed independently. There's also the option to switch the EQ into the compressor side-chain for frequency-conscious compression applications such as de-essing. Again there's that +10dB switch to extend the metering range, and the optional DO2 digital card can be fitted if needed.

Finally, the Ebony A3 is essentially a mono equivalent of the A2, but the saving in circuitry by having only one channel has enabled the designers to include a 30dB pad switch, an instrument/line jack and a 90Hz roll-off filter, so if you only need a single channel of processing, this is the most capable and flexible of the three units — and it offers an insert send and return point too (the insert send may also be used to provide a direct out feed from the preamp). The insert point comes before the tube drive stage and the spare half of the tube is used as the instrument input buffer. The compressor and EQ sections of the A3 are identical to those of the A2 so, given the circuitry similarities in the preamp and tube drive stage, I concentrated on the Ebony A3 during my testing, as that covers pretty much everything the other two units offer.

Starting with the A3's mic preamp, this sounds as neutral and quiet as any other TLA products we've tested over the years, so although it isn't overly fancy or esoteric, it turns in a very creditable performance. The EIN figure is quoted at -127dB unweighted, and the frequency response is flat to within 1dB from 10Hz to 40kHz with 40dB of mic gain. Bringing in low levels of tube drive adds a subtle degree of warmth and definition to the sound, but higher levels start to sound more obviously distorted, which can be slightly gritty and fatiguing on DI'd guitars or basses, unless you follow the Ebony A3 with a speaker simulator or plug it into a guitar amplifier to skim off the unpleasant high harmonics. I preferred to use the drive control in the first quarter of its rotation for most sound sources, including vocals. What I do like is the way the level is automatically compensated as you turn up the tube drive, so you can really hear what it is doing without having to mess about with output levels.

Back to black: the Ebony series demonstrate TLA's love of analogue VU meters and retro styling.Everything about the EQ section is reassuringly analogue, in particular the way you don't need much of it to make an audible difference. The low end needs to be used extremely sparingly on vocals but the mid and high controls are very musical with plenty of range in the mid to tackle drum boxiness at the low end or to add presence at the high end. The fixed bandwidth of the mic control makes it less flexible than a fully parametric EQ but the setting chosen is a good compromise. I love the well-defined high end and upper mid this EQ can achieve, and for bass instruments that low EQ really comes into its own.

Considering that the compressor has such a simple set of controls it actually sounds very capable and doesn't kill the high end as some lesser designs can tend to, even when it is used at relatively high gain-reduction settings. The slow attack/fast release setting works well on bass guitar, while the fast attack seems to suit vocals. You can get a really sweet country 'ping' to the guitar sound when DI'ing, and bass guitar also gains weight and definition when you add a touch of compression. One underplayed aspect of the compressor is the EQ/SC feature, which puts the EQ in the compressor side-chain, or at least that's what it seems to do (this point seems to have been completely ignored in the A3's manual). There's no side-chain listen option, which makes setting up a bit hit-and-miss, but I found it was easy enough to set up as a de-esser by simply watching the gain-reduction meter and then tuning the mid control for the most gain reduction on 'S' and 'T' sounds. Even at very high gain-reduction settings it sounded noticeably less 'lispy' than most other single-band de-essers that I've tried.

Overall, the Ebony range performs in the predictable and musical way that TLA products have tended to do over the years, which may be low on excitement but definitely avoids a lot of frustration. Indeed it is quite hard to make any aspect of the Ebony A3 sound bad unless you get really stupid with the EQ and tube drive levels. From my viewpoint, this is exactly the type of gear you need on a busy session, as you can achieve really good results with the minimum of messing around. Other than a few minor niggles, then, such as having to switch one meter to cover all functions and having no side-chain listen or external side-chain input, the Ebony range gets the thumbs up, even though it has some serious competition at similar or lower prices. There are plenty of plug-ins that offer EQ and compression, but there's still something about well-designed analogue circuitry that just sounds more 'real'.

Alternative channel strips with EQ and compression include the SPL Channel One and Drawmer 1960. If you're just looking for a good preamp of comparable quality and don't need the dynamics processing, the SPL Goldmike Mk2 and the Aphex 207D should feature on your list.

The Ebony range combines great audio quality with ease of use, and is precisely the sort of gear you could rely on in a studio session, but it is by no means alone in its price range.