SE have updated their Gemini and multi-pattern Z5600a mics with extra facilities and better technical specs. Are they worthy contenders for space in your mic locker? 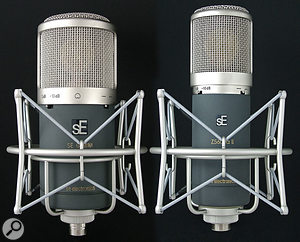 Photo: SE Electronics / Mark EwingSE's original fixed-cardioid-pattern Gemini microphone (reviewed in SOS June 2004, www.soundonsound.com/sos/jun04/articles/segemini.htm) broke with tradition by offering tube technology in a transformerless circuit, resulting in a microphone that combined the warmth of a tube mic with the airy top end of a solid-state, transformerless model. The vast majority of tube mics have transformer-coupled outputs, due to the need to match the high impedance of the tube circuitry to the lower impedance associated with microphone signals, but that design can soften the high end to a noticeable extent. Sometimes this is exactly what you want, but at other times it would be nice to retain a bit of 'air'. That's just what the Gemini aimed to do, and SE have now updated the concept with a new version, which I'm looking at here alongside another SE tube-mic update, the Z5600a II (first reviewed in SOS in May 2003; www.soundonsound.com/sos/May03/articles/sez5600.asp).

You may recall that the first Gemini mic used two dual-triode tubes, hence its impressive girth. Housed in a similarly chunky 80mm x 230mm body, the Gemini II again features dual tubes, this time a 12AX7 for the input stage and a further 12AU7 in the output stage; the latter takes over the role of the more usual transformer. There are no transistors or FETs that I could see, so this appears to be a true all-tube design.

A switchable 10dB pad has been added to the new mic, along with a switchable low-cut filter, and the included PSU is SE's new updated design, with a chunky, brushed-aluminium case and improved electronics for lower noise. The current range of SE tube mic PSUs feature a controlled power-up LED, which blinks for around 30 seconds to give the tubes a chance to warm up, but (as with tube mics in general) it's best to allow the whole mic to warm up for half an hour or more before using it, not only to get the circuitry to operating temperature but also to help drive off any condensation from around the capsule. This particular PSU features no controls other than a power switch, and aside from the IEC mains inlet there's just the eight-pin XLR to connect to the mic and a conventional three-pin balanced XLR output. A screw-locking (both ends) eight-pin cable is included with the kit, along with the shockmount and PSU. The mic itself has a foam-lined wooden case, and all the kit elements fit into a sturdy aluminium carry-case that weighs only slightly less than my guitar combo!

As far as I can tell, this revision uses a similar 1.07-inch, gold-sputtered, centre-terminated, cardioid capsule to its predecessor, mounted inside a large, dual-layer mesh basket on a shock-absorbing support. The twin tubes are fitted in porcelain bases, while the rest of the circuitry is mounted on two double-sided, glass-fibre circuit boards. All the components are discrete and appear to be of high quality, and the standard of workmanship is impressively high. As with the earlier version, there are no clips to hold the tubes in place but they don't seem in any way inclined to work loose. Both of the newly added switches (for pad and low-cut filter, as mentioned above) are sideways-mounted, miniature toggle switches with their functions labelled on the metalwork.

The Gemini II is predictably weighty, so it would benefit from a substantial stand to avoid toppling. At the bottom of the mic is an eight-pin connector for the cable that links the mic to the PSU, and the shoulder of the protruding XLR housing is threaded so that it secures to the shockmount's integral locking ring, allowing the mic to be operated at any angle, including fully inverted. The shockmount itself follows the familiar metal-cage construction, with fabric-covered elastic hoops supporting and isolating the inner section. I had some criticisms of the original Gemini's stand mount, as it was prone to working loose under the weight of the microphone, but this new version has a toothed pivot assembly that locks into place very firmly. The mount also comes with a thread adaptor, so will fit both European-thread and US-thread mic stands.

The Gemini II has a 20Hz-20kHz frequency range, but with a gentle hump up at around 10kHz to add an airy presence to the sound. Its sensitivity is quoted as 12.6mV/Pa, and its self-noise, at 12dB A-weighted, is a significant improvement over the 16dB A-weighted managed by the original version. Its maximum SPL for 0.5 percent THD@1000Hz is 135dB, some 5dB better than the Gemini I, and the output impedance is the same nominal 200Ω. 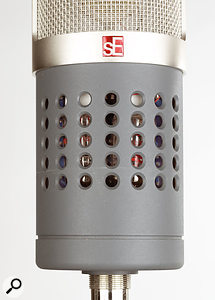 Like its predecessor, the Gemini II boasts twin valves, one for the input stage and one for the output stage, which can clearly be seen through the mic's case.Photo: SE Electronics / Mark EwingSubjectively, this Mk II version sounds quite similar to the original Gemini, which is a good thing, as I know a lot of users really like the Gemini sound. As I mentioned above, the transformerless design would appear to combine the most recognisable attributes of tube and solid-state microphones, providing the expected tube warmth and low-end weight but without losing the high-end sizzle, as can happen with 'tube plus transformer' designs. Because the presence peak is right up at 10kHz there's no tendency to over-emphasise the harsher upper-mid range, though singers wanting a slightly more rounded top end may want to try using the mic slightly off-axis to soften the tone. I did, however, notice that the basket assembly of the mic resonates at quite a low frequency if tapped, resulting in a very audible rumble. Use of the included shockmount, as well as a separate pop shield, is highly recommended.

Because of its high-end clarity, the Gemini II also makes a useful instrument microphone, its capabilities extending from acoustic guitars and other plucked instruments to percussion and wind. If you were thinking of buying a Gemini II as a main vocal mic for your own use, you'd need to make sure it suited the character of your voice, as you would with any microphone, but for anyone who already has one or two conventional solid-state and tube microphones the Gemini provides a distinctive tonal alternative and thus would be worth adding to a collection.

The Gemini II isn't a budget microphone — indeed, it costs more than some of the big-name European models, which may give you a hint as to the direction SE are taking for the future. They have a wide range of affordable microphones, and that looks set to continue, but they also have some innovative design ideas that they can apply to more up-market products, and the Gemini II is clearly in that category.

Lighter on both the pocket and the wrist than the Gemini II, the Z5600a II is, again, an update of an earlier SE tube microphone, this time the Z5600a. The Z5600a II is packaged in a similar way to the Gemini II, complete with new-style PSU, locking eight-pin cable and shockmount. Unlike the Geminis, however, the Z5600a II is a multi-pattern microphone offering nine pattern variations, going from omni, via cardioid, to figure-of-eight. The rotary pattern-control switch is located on the PSU alongside the eight-pin mic connector and the three-pin XLR balanced output feed. 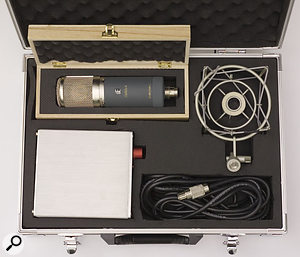 The Z5600a II kit includes shockmount, power supply, cable and separate wooden microphone box, all inside a larger carry-case. The Gemini II comes similarly packaged.Photo: SE Electronics / Mark EwingAs the microphone offers multiple patterns, it is equipped with a dual-diaphragm capsule (back-to-back cardioids), again 1.07 inches in diameter and centre terminated. LIke the Gemini II, -10dB pad and LF roll-off switches have been added since the last version. Conceptually, this mic is much more conventional than the Gemini II and features a dual-triode ECC83 tube feeding into an output transformer, so it sounds rather more like you'd expect a tube mic to sound, with plenty of body and warmth and a slightly smoothed-out high end. However, the capsule has a broad presence peak rising towards 10kHz, so this isn't a dull-sounding tube mic.

The Z5600a II's frequency response is specified as 20Hz-20kHz, with a sensitivity of 14.1mV/Pa (0dB=1V/Pa 1000Hz). Improvements to the PSU and internal circuitry have lowered the self-noise to a creditable 12dB A-weighted, while the maximum SPL for 0.5 percent THD at 1kHz is now 135dB. In general, the physical construction of the basket and housing (and the shockmount, in this case) is similar to that employed in the Gemini II and other recent SE models, and comes across as very solid and sensibly engineered. The basket assembly rings slightly if you 'ping' it with your finger, but that doesn't seem to come across in the sound and it doesn't produce the low-end grumble, when handled, that the Gemini does.

Tonally, this mic has much in common with its earlier incarnation, producing a full and generally smooth vocal sound with a bit of lower-mid 'chest frequency' support that may help those with thinner-sounding voices. It does sound a bit lacking in character in direct comparison with the Gemini II, but in reality that is probably because it is intrinsically less coloured. The high presence boost helps keep some 'air' around the top end, but the subjective result is still smooth. As I'd expected, the sound opens up more in omni mode, and although it's not as transparent as a single-diaphragm, dedicated omni model, the Z5600a II works well in omni mode for capturing room ambience or for close-miking acoustic guitars and other instruments. In figure-of-eight mode, the sound is closer to what you'd expect from the cardioid pattern than the omni. In accordance with the laws of physics, both the cardioid and figure-of-eight modes exhibit a proximity effect that exaggerates the low end when used close up, which the omni mode does not. Nevertheless, the tonal consistency between the patterns is pretty close.

At around half the cost of a Gemini II, the multi-pattern capability of the Z5600a II makes it rather more versatile, but it doesn't have the unique Gemini II timbre. It does, however, have a classy sound, especially on vocals, and because it doesn't stray too far from the expected tube mic tonality it may work with a wider range of voice types. It certainly offers good value, and even if you feel a cardioid-pattern mic is all you really need, those additional patterns may well come in useful from time to time.

It's unusual to find a transformerless tube mic such as the Gemini II, and the only other company I can think of that make one are CAD, whose less costly M9 employs solid-state output components in place of the second tube the Gemini uses at the output stage. Turning to the Z5600a II, If you're in the market for one of these the Rode K2 is also worth a look.

The Z5600a II sits at the more affordable end of the multi-pattern tube-mic market but delivers on both sound and build quality.