How have SE improved on their innovative Reflexion Filter?

There's no doubt that SE Electronics really started something when they launched their Reflexion Filter — it can have a significant impact on the sound of vocals recorded in a less than optimal acoustic space. The idea is that it intercepts reflections approaching the microphone from the rear and the sides, helping to dry up the sound. It's also claimed that it filters out the vocal that passes the mic, preventing it from reflecting around the room in the first place. I like to use them in conjunction with an absorber of some kind (usually a polyester duvet when working on a budget) behind the vocalist, as this intercepts reflections that might otherwise find their way into the hot side of the mic that the screen can't cover — but that's a story for another day! 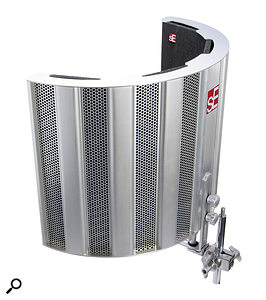 Since the original Reflexion Filter was launched, the bandwagon springs have been creaking under the strain of other manufacturers climbing aboard, though SE's patented multi-layer technology seems safe from direct copying. Most competitors use acoustic foam, sometimes over a perforated backing, sometimes over a solid backing, but occasionally just the foam on its own. Real Traps make a more sophisticated mineral wool-based device, but it is significantly larger.

Housed in a perforated aluminium frame, the Space is made up from 10 individual layers, counting the air gaps that are an essential part of the design. The mounting hardware, which is now tiltable, is also much better thought out than that of earlier versions. According to SE, the seven vertical pillar sections in these layers also double as bass traps, although I'm not sure how anything that small could actually be a bass trap. Then we have the punched-aluminium frame itself providing diffusion. Backing onto this is acoustic-grade wool, then a tensioned aluminium-foil membrane. The isolating air gap counts as another layer before a second tensioned aluminium-foil membrane, another layer of wool and then a polycarbonate diffusor. Next we have another air gap layer and then, finally, on the inside of the screen, is a layer comprising four polyester rectangular acoustic fibreboard panels. The overall effect is neat and very hi-tech looking.

It's very difficult to tell how much more effective this design might be when compared with the original Reflexion Filter, as that too seemed pretty efficient over that part of the audio frequency range that's inhabited by vocals. The slightly larger size will, of course, help keep out more reflections, and where the mic is positioned in line with the mouth of the filter — the normal mode of operation — any tonal coloration added to the recording is negligible. So yes, the new Space works very well, with most of its benefits probably due to its increased size and superior mounting hardware. The latter is a great improvement on the original design, which tended to put the whole mic stand off balance. Those extra layers should also improve the effectiveness at lower frequencies, which will be of most benefit when recording instruments or very deep voices. That doesn't mean you can do away with the duvet behind the singer or forget about ceiling reflections, but using the Space does give you a far cleaner vocal recording than not using it and it doesn't suffer from the levels of boxy coloration imparted by a bad vocal booth! Paul White