Studio stalwarts sE join the stage-mic fray with these two new designs. It’s a crowded marketplace — can they stand out?

While sE are perhaps best known for their studio mics, they’ve made entries into the live-sound market before, and these two new very affordable dynamic microphones are designed to survive the hard knocks of life on the road. The sE V3 and V7 are both hand-held, moving-coil vocal mics powered by neodymium magnets. 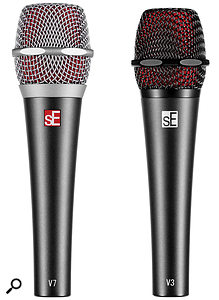 sE Electronics V7 (left) and V3.The V3 has a cardioid response with an on-axis frequency response of 50Hz to 16kHz, which is pretty healthy for this type of microphone. Its presence peak is nice and broad, which avoids adding nasal-sounding coloration while still delivering a reasonably airy sound that cuts through.

Constructionally the mic has a rugged steel-spring basket finished in satin black, and the surrounding bevel ring has five flats machined into it so that it can’t roll off the desk while I’m writing about it. Most considerate! Its zinc-alloy body is finished in a very dark grey metallic paint and feels comfortable and substantial in the hand. There’s an internal red foam windscreen just visible through the grille that can be swapped for the included black one if you prefer it. A resilient internal shockmount supports the capsule, which employs a copper voice coil, and the signal exits on gold-plated XLR pins. The mic is shipped with a stand clip and a soft storage pouch.

With similar styling but being marginally wider around the basket (54mm, as opposed to 52mm), the V7 offers design sophistications such as a lightweight aluminium voice coil that allows the frequency response to be extended to cover 40Hz to 19kHz. This time the polar pattern is supercardioid, with the least sensitive region being 45 degrees off the rear axis. The shape of the presence peak is also different, being more subtle than for the V3 and comprising two gentle humps, one centred at around 3.5kHz and the other around 10kHz. This time the basket has a silver/grey finish, again with a red foam insert and a black spare in the box. The accessories are the same as for the V3 and both mics have a similar weight, the V3 being just under 300g and the V7 just over.

Both mics are designed for low handling noise and to offer a reasonable resistance to popping, where the V7’s supercardioid pattern is designed to resist feedback at higher gain settings as well as reducing spill from instruments on either side. Both mics have sensitivity figures comparable with other high-quality dynamic microphones — 2.5 mV/Pa for the V3 and 2.0mV/Pa for the V7. Being directional mics, both models include a gentle low-frequency roll-off to help counter the proximity effect (bass lift) that arises when using pressure gradient microphones close to the source, as is invariably the case with live vocals.

Both mics deliver a solid, natural vocal sound with good resistance to popping and suitably low handling noise. They manage to sound punchy without being over-harsh in the presence region, with the V7 having a more airy character to the high end. Their resistance to feedback is at least the equal of other good-quality mics, but again the V7 has an advantage in this respect as its tight pickup pattern, combined with more subtle presence boost, allows for noticeably more level before feedback than for the V3.

While both mics are priced very fairly given their solid level of performance, the V7 is going to find itself up against the Shure SM58 on street pricing and, whatever the V7’s performance merits, the SM58 just seems to keep on selling in that price sector. However, I think the V7, in particular, is worth a close look as its extended frequency response and good resistance to feedback make it a strong performer. That’s not to say there’s anything at all wrong with the V3, and in some cases its more pronounced presence peak might suit your voice better, but as a good vocal mic will last for many years and the price difference is only about the same as a curry and a beer, I’d save up for the V7.

One often overlooked alternative is the Prodipe TT1, which has a very clear and open sound for a surprisingly low cost, and MXL also make some good budget vocal mics — as do AKG, Audio-Technica and Sontronics, among others. Indeed, you’ll find alternatives from many companies, with Shure’s SM58 and Beta 58 perhaps being the most direct competitors.

These are both very capable vocal microphones, but for me the V7 is worth that little extra, not least because of its greater resistance to feedback.