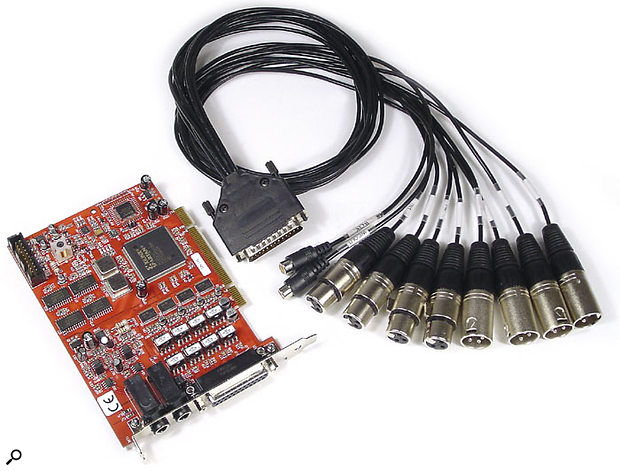 Amidst the plethora of PCI audio interface cards for computers there are few with truly professional aspirations, but the SEK'D Prodif 88 is one such offering. This unit boasts eight bi-directional I/O channels of pure AES-EBU digital interfacing, with full 24/96 resolution. Each digital port is transformer-balanced, and there are a further two analogue outputs for stereo monitoring. Being primarily a digital I/O interface, the technical specifications really depend on your audio processing software, and the quality of the A-D and D-A converters you choose to use for recording and monitoring.

The digital I/O is made available via a 25-pin D-sub connector, and a one-metre breakout cable is supplied. This provides a tangle of 10 separate cables, four terminated in male XLRs for the AES outputs, four more in female XLRs for the AES inputs, and two with phono sockets for word clock in and out. It would have made life a lot easier if cable-mounted female BNC connectors had been used rather than the phono sockets, given that word clock interfaces are connected exclusively with BNCs. However, suitable BNC-phono adaptors are available from all the usual suppliers at a cost of around £3. The D-sub pin-out wiring is a bespoke arrangement (mainly to accommodate the clock terminals) and is not directly compatible with the ubiquitous Tascam standard, but the handbook does provide the pin-out plan should you want to make up your own interface cables.

On the subject of clocking, the card is pretty flexible in this regard. The word clock output is derived from the analogue monitor outputs' D-A sample rate, and this may be different from the input sample rate. In fact the card can be set up through the configuration menu for independent clocking options on the record and playback sides, although certain combinations are not allowed. The user can select separate record and play clocks from either the external word clock input, any of the four AES-EBU inputs, or the internal clock at whatever rate has been preselected. However, when monitoring both record and playback simultaneously (as you would when overdubbing, for example) both sections must obviously use the same clock source. A second restriction is that if playback is locked to one of the AES inputs then the record side must clock from the same input. Finally, if you're recording with the internal clock or an external word clock as a reference, playback can not be referenced to an AES input.

The analogue stereo monitoring outputs are provided on quarter-inch TRS sockets at the top of the panel strip, and support balanced or unbalanced connections with selectable nominal output levels of +4dBu or -10dBV. The D-A converter is 24/96 capable and the specifications claim that the noise floor of the analogue monitor output is better than -108dBFS (A-weighted at 44.1kHz and +4dBu nominal level).

The card itself is a high-quality short-form PCI board covered mainly with surface-mount components. A multi-pin connector socket at the top rear is provided for synchronising multiple Prodif cards together, although the appropriate 'J-sync' link cable is not supplied and must be ordered separately if required. Up to four Prodif cards can be linked together with fully synchronous and sample-accurate clocks to provide 32 channels of AES I/O. 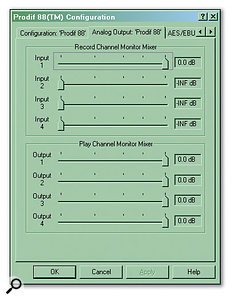 In a multi-card setup, the ability to rename the card may be useful.Four of the quintet of handbag jumpers on the board are provided for user configuration of a few aspects of the hardware. Two select the output level for the analogue monitoring ports (+4dBu is the default condition, with -10dBV being available by moving two jumpers), and a second pair enable or disable the external word clock input and output facilities individually.

SEK'D have issued quite a few software and firmware updates for the Prodif 88 card since its launch early last year, most providing bug-fixes and some including operational improvements. The complete update history is documented on the company's web site. At the time of writing, the current versions are Revision B PCI card hardware with Version 4 firmware and v4.05.1011 drivers.

The published minimum system requirements for the Prodif 88 are a Windows-based computer (sorry Mac users) using a 300 MHz PII processor with 64MB RAM and a "free PCI slot" — no, really! However, a more realistic minimum would be a 450MHz Pentium III with 128MB RAM. The driver software supplies Multimedia MME (wave) and ASIO drivers for pretty much all the common Windows operating systems including Windows 95/98/ME, Windows NT (from SP3), Windows 2000 and Windows XP. The drivers have not yet been tested by Microsoft, so a message pops up during installation to warn of 'unsigned' drivers.

Installing the card and software is a doddle. After fitting the card into a spare PCI slot I rebooted the machine and pointed the Found New Hardware wizard at the supplied CD-ROM to load the core drivers. Having loaded the basic MME drivers I then had to do a little manual file manipulation to load the ASIO drivers and the control panel to display and change the configuration menus. These two software items are apparently not loaded by default to avoid cluttering up the system with "unnecessary files" — although if you are a Cubase user, ASIO drivers are pretty important, and we all like to tweak control panels, don't we?

As usual, it was only after installing everything that I discovered updated drivers on the SEK'D web site (the CD-ROM supplied with the board was the previous v4.05.1008). After downloading a PK-Zipped file containing all of the drivers for every OS plus the control panel software, I was able to install the current v4.05.1011 drivers.

As you can see from the various screen grabs, each menu page has its own tab at the top of the window, starting with the basic card configuration page, and everything apart from the initial configuration menu is largely self-explanatory.

Some of the first menu options are less than obvious, so I'll give a quick run-through. At the top of the window the name of the interface can be changed if required, which might be useful in a multi-card system. The radio buttons on the right-hand side set the output status bits to indicate professional or consumer mode, audio or data, pre-emphasis, and copy-protect (only applicable when consumer mode is selected). The provision of a data mode is handy if you happen to working with Dolby Digital or DTS surround-encoded audio files. 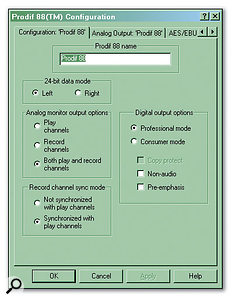 The Prodif 88 features a stereo analogue output for monitoring purposes.The 24-bit data mode sets the way in which the driver handles 24-bit audio data packed within a 32-bit value, and the options below determine what will be output through the analogue monitor sends. The record channel sync mode enables the record and replay channels to operate independently or be synchronised — although this function depends to a degree on the flexibility of your audio software. This facility is intended to appeal particularly to broadcasters using computer-based radio automation systems, allowing each channel to be started and stopped independently, for example.

The Analogue Output menu provides a mixer panel to combine the record and replay channels. If the monitor option on the configuration menu is left in its default mode of monitoring the replay channels only, then the input channels are disabled in the mixer. The AES menu page enables the AES outputs to be used as monitoring channels (with zero latency), to pass through the corresponding input signals (and only works if the monitoring selection is set to both record and replay).

The Input Lock page simply provides illuminated legends to show when valid clocking signals are being received and decoded correctly from the four AES inputs and the external word clock. The Version page shows the hardware card revision and firmware version, but not the driver versions, strangely — this has to be located in the Windows Control Panel under the Sound Devices sub-section.

The Clocks and Sync page looks empty here, but each card installed is listed here and by clicking on the appropriate card a second window pops up to enable the record and replay clock selections to be made, as previously described. The final menu page is to configure the buffer setting of the Prodif 88 ASIO driver, if installed. The default buffer size is 80ms.

The SEK'D unit was trivial to install and configure, and worked remarkably well. There are many inherent advantages in keeping A-D and D-A conversion well away from computers, not least being a lower noise floor and usually far better conversion quality. With the proliferation of affordable digital mixing consoles and 'producer preamps' with onboard A-D conversion, it certainly makes sense to just pass digital audio to and from the computer via a card like this.

I hooked the Prodif 88 up to a variety of professional equipment including a an Apogee PSX100, Panasonic DAT machine, HHB CD recorder, a Genex 8500 multi-channel recorder, and a Yamaha 02R96, passing audio in and out of the computer to Cubase VST 5 and Cool Edit Pro v2.1 without any difficulty at all. The clocking all worked properly and reliably, and after making sure dither was turned off in CEP I was able to prove that the card was bit-transparent — what came in, went out, and came back in again was identical to the source! If you are looking for an eight-channel interface and are happy to work with AES signals this is a fine tool for the job — I can certainly recommended it.

A compact PCI card providing eight channels of AES-EBU digital audio into and out of a PC, complete with separate word clock input and output and a 24/96-compatible stereo line-level analogue monitoring output, the Prodif 88 is supplied with MME and ASIO drivers for all current Windows OS versions, and works splendidly.