If you're an electronic musician who's tired of trying to make generic audio software fulfil specific needs, perhaps Siren Audio's package is for you.

Michael Sweeton uses Cycling 74's Max modular programming environment to create his Siren Audio range. This is currently home to three applications designed for the creation of particular types of sound used in electronic music, especially drones, granular loops and randomly generated samples. All three run only as stand-alone programs, the idea being that you write the material created to disk, for import into a sampler or DAW. Each is authorised by entering a serial number, and they are available only as downloads.

I rather like Michael's peaceful graphical interfaces, which are a refreshing departure from the norm. A nice touch is the 'info' panel in each program, which reproduces the main interface section by section, displaying helpful messages about what each control does. There are also PDF manuals, though I found these slightly on the brief side. 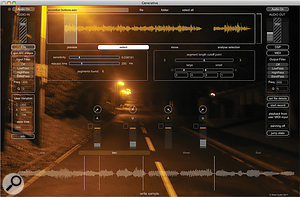 A couple of years ago, a colleague worked out that it's possible to make any source signal sound like Sigur Ros if you put enough delay plug-ins on it. Siren Audio's Generative uses different means, but often achieves the same end. It's a kind of granular synthesizer, which works by first analysing a piece of audio, then providing four separate 'playheads' that can be moved about within it. The positions of these playheads can be adjusted with the mouse, or by using MIDI controllers — that is, unless you'd rather leave it up to Generative to move them around, which it will, following some rather opaque principles of its own.

Generative can capture audio played into it, or it can load a file from disk; in the latter case, you need to select a chunk of it for analysis. Various filtering options can be applied either prior to the filtering process or to the regenerated output.

There are 16 parameters that can be MIDI controlled, and a simple 'learn MIDI' option makes it easy to assign them. Oddly, though, all of them respond only to continuous controllers, rather than Note On messages or other binary data, even though some of them are simple on/off parameters, so to make much use of MIDI, you'll need access to a decent number of faders or rotary controls. 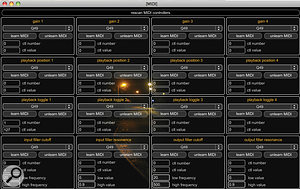 If you have sufficient faders or rotary controllers, you can achieve in-depth MIDI control over Generative.

Even after reading the documentation, a certain amount of trial and error was required before I got to grips with the parameters relating to segment size and 'division'. Since this is very much a program that relies on serendipity, that's not a huge problem, but to my mind there are a few other refinements that could make Generative more usable. Each of the four playheads has its own level fader and circular panner, but the latter are only controllable if you choose the 'panning off' setting, which seems a bit strange; and if you use a mono source, the panner simply acts as a second level control, and any playhead panned hard right is silent.

I found myself mainly using Generative with audio files, and quickly found that a variety of interesting noises can be achieved with relatively little effort. The richest source of interesting noises is a signal with a broad frequency content and plenty of variety, such as a full mix. Depending on whether each playhead falls on a snare hit, a guitar chord, a sustained vowel sound, or whatever, there's a world of weird and wonderful audio to be found in even a few bars of the dullest rock song. At the other end of the spectrum, I tried using a short section of solo accordion, and no matter what settings I used, the output sounded like a short section of solo accordion. In general, as you'd expect, it's a good source of textures, ambiences and pads, and when you hit upon something you like, it's easy to record its output to disk for loading into a sampler or DAW. Depending on the setting of the 'Signal Vector Size' and other parameters, Generative can consume surprising numbers of CPU cycles, but as it can only be used as a stand-alone program, it doesn't share these with a host package.

Ready For The Chop

Sampler is, well, a sampler, but not the sort you'd use for streaming virtual orchestras. The idea is that you load in a single audio file — again, all you need is a few seconds — whereupon the application chooses 16 start and end points at random within that file and assigns them to notes on a MIDI keyboard or MPC-style pad. It's a little like those plug-ins that will chop a loop into segments, except that here the slices are completely random, with no rhythmic basis. Each slice has its own optional filter, pitch-shift, envelope, pan and loop settings, and there's also a global output filter.

By selecting a slice in the 4x4 matrix at top right, you can adjust all its parameters individually, including start and end parameters. When you have slices sounding as you want, you can fix them so that they aren't affected when you next randomise Sampler's settings. You can also globally exclude various parameters from the randomising process.

Although it can certainly do the Sigur Ros thing with suitably relaxed envelope and filter settings, Sampler naturally tends towards a more glitchy, nervous sort of sound. Again, there are a few user-interface quirks to conquer and occasionally I found it wouldn't output sound until I quit and re-opened it, but in general it makes a simple and fertile source of Four Tet-style twitchy rhythms and stuttering effects.

Lunch At The Drones 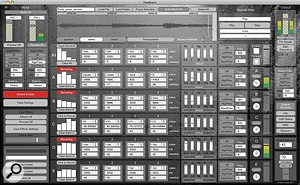 Compared with its siblings, Feedback presents a huge number of controls, and is definitely the most intimidating of the three! It's intended, apparently, as a quick way to create drones and other abstract textures, and does so by feeding no fewer than 20 delay lines through compressors. The delay lines are grouped into five banks of four, while there's also a global set of controls that allows you to apply the same parameter change to all banks simultaneously.

Once again, Feedback can take its input either from your soundcard or from a file, and this time both can be used simultaneously. Various effects can be applied to the input signal, including filtering, distortion and yet more delays. Once you're happy with how it sounds, you can hit one of the five Recording buttons to sample a section of it into a bank of delay lines. Each delay line has three parameters: delay time as a division of global tempo, the same delay time expressed in milliseconds, and 'variation', which adds a random element to the delay time. At the end of each bank of four delay lines is a compressor, which has the usual threshold, ratio and time-constant controls, plus a fader that limits the "maximum amount of gain amplification” applied. There being no make-up gain control, I assume that this is applied automatically. Each bank of delays has its own filter, pan and level control, and there's also a global output filter.

I found that Feedback required a bit more setting up than the other two Siren Audio programs, and there are one or two areas that could do with being documented more fully. Frequently, I simply couldn't get a particular delay bank to do anything at all, for no obvious reason, and I found it was often hard to bring the processed output up to a useful level using the shortish faders provided. When it does work properly, though, it fulfils its stated brief quite well. The drones that it outputs usually have a pulsing, cyclic quality to them, and the most pleasing results are generated when the Variation parameters bring about slow evolutions in the patterns of repeats.

None of these three programs is what you might call a 'mainstream' piece of audio software. They don't work as plug-ins, they don't include a large selection of presets covering different genres, and many aspects of their operation are quirky. As is perhaps inevitable in applications coded in Max rather than in a low-level language, they can also be quite heavy on your CPU. But at this low price, it seems hardly fair to criticise them for these attributes, except to point out that they would be more usable in a live context if their operation was slightly slicker and more predictable. They are, after all, tools designed to fulfil quite specific roles in the production of certain types of electronic music and, as such, are arguably unique. You can expect to spend an hour or two getting to know them, and some improvements in the stability of Feedback would be welcome, but even so, they could prove very fertile sources of inspiration for your tracks.

If your music occupies the wilder shores of electronica and you're in need of fresh inspiration, time spent with Siren Audio's software might be well rewarded.